I joined the Heyfield bird mob on a visit to the Wuchastch Reserve at Nyora recently. It was a bit of a quiet bird day, although it was good to find the Brown Gerygone in yet another local site. This little bird is almost becoming ubiquitous.

In one or two spots we saw a little bit of orchid leaf and eventually discovered a small colony of the Wasp-orchid. I think it is the Tall Wasp-orchid, Chiloglottis trilabra. 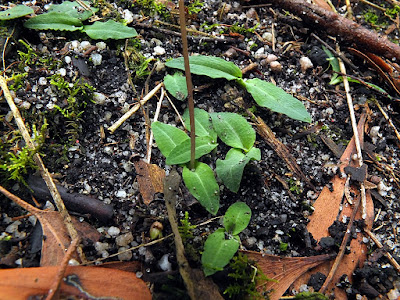 There’s probably four species of Wasp-orchid that grow in Victoria and mostly they flower between late summer and winter. Although flowering can be a bit of a hit and miss event, it seems they will flower profusely after a fire event. 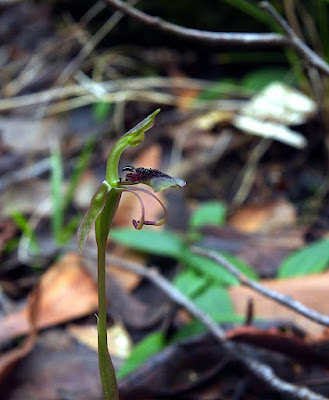 It is thought the calli on the labellum is meant to appear like the body of a female thynnid wasp, thus tempting the male wasp to visit and so enhance the pollination process. Here’s a link to a page from the excellent Retired Aussies site that shows images of such a wasp visiting a Tall Wasp-orchid. 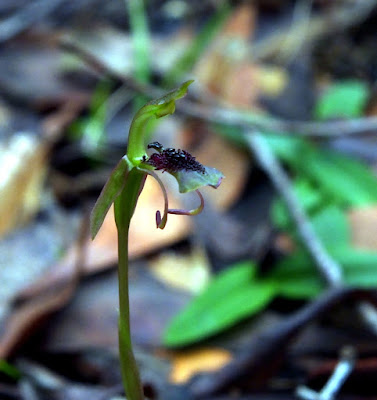 We also spotted a Rosy Hyacinth-orchid beside the track. This one seems to be in flower a bit late in its season in my book. I usually see these orchids mostly through mid-summer. 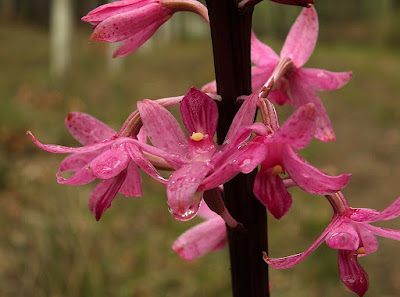 These epiparasitic orchids derive their nutrition from mycorrhizal fungi that are associated particularly with the roots of eucalyptus species. A beautiful parasite that survives because of another parasite – who cannot be entranced by nature?
Gouldiae
Posted by Gouldiae at 10:48 AM 1 comment:


Trees have been my focus for some months and I have been struggling to publish anything here of late. If I haven’t bored you with Drouin tree stuff as yet, you might like to check out our Friends of Drouin’s Trees blog. Momentum is gathering!

I managed to ‘escape’ briefly into the nearby hills recently and discovered that if one ventures deep enough into the wet gullies, that despite the recent dry conditions the fungi season has begun. As usual, any help with ID’s is appreciated – (heyfieldwaresATwidebandDOTnetDOTau).


All of these were found on the walking track up to Lawson Falls in Bunyip State Park.
Gouldiae

Posted by Gouldiae at 8:43 AM No comments: