This bird is a rather a cosmopolitan species with countries like Siberia, India, China, Japan, Indonesia, and plenty more being mentioned in its distribution notes. Consequently it has several common names – Scaly Thrush, Ground Thrush, White’s Thrush, etc - but I’ve always known it as the Bassian Thrush. 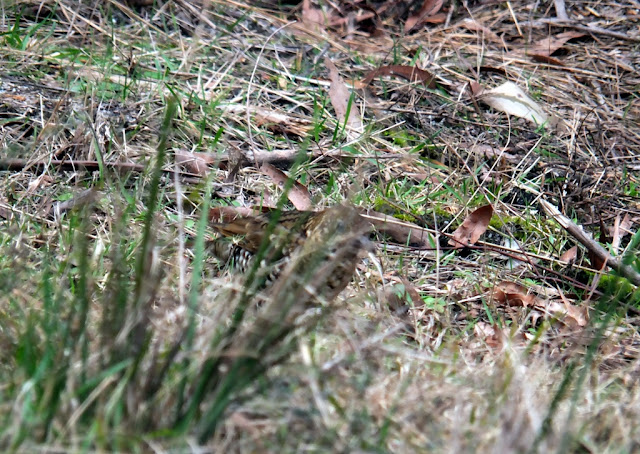 I came across this one yesterday in the Bunyip State Park. It dashed across the road in front of the ute, and then sat motionless while I reached for the camera from the back seat. It took several seconds to set the camera, lower the window and point to the subject … which had disappeared! 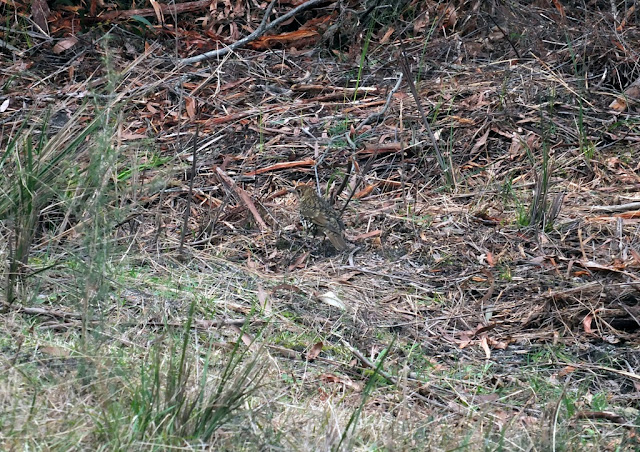 I almost gave up and moved on, thinking the bird had reached the cover of the roadside understorey.  Just then, it hopped a short distance and started picking up tasty morsels in the leaf litter, giving me the chance to zero in again. 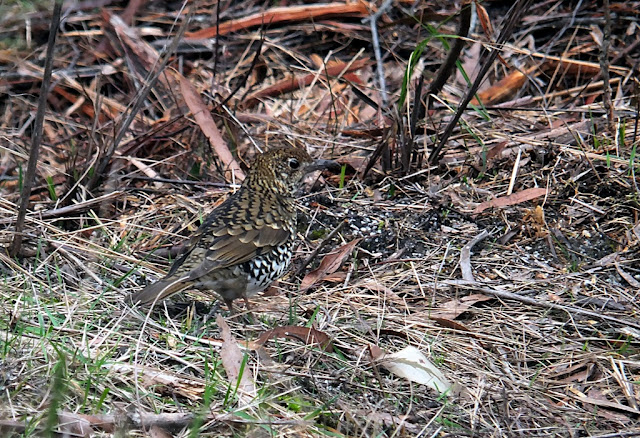 Each time I took my eye away from the viewfinder the bird would just merge into the background and I had to scan the area again to find it, or wait for it to move again. 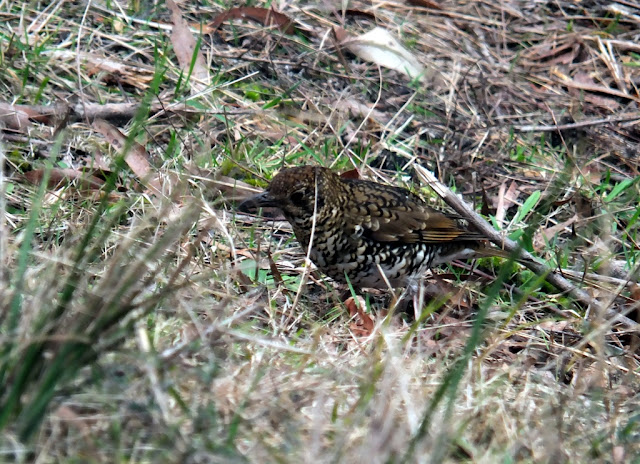 The Bassian Thrush is not uncommon apparently but the combination of its preferred habitat of dense brush and scrub, its tendency to call very little for most of the year and of course that marvelous camouflage, make it a seldom seen species. I was just lucky and didn’t even have to exit the ute!
Gouldiae

'The Kookaburra' by C J Dennis 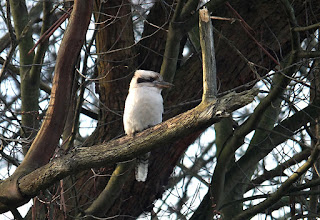 I AM cursed with a cackle whenever I tackle
A soulful and lilting refrain;
But a frivolous snicker, like some fool in liquor,
Is not what I seek to attain.
For I have, on the whole, quite a musical soul
Which I seek to express as I may.
And it's simply absurd to suppose that a bird,
Such as I, makes a laugh of his lay. 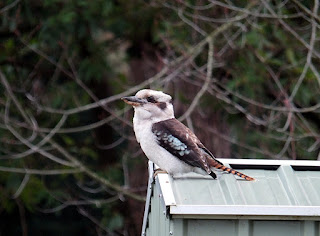 In early October I'm specially sober
And loaded with household affairs;
And myself and my wife lead no trivial life
That inclines us to laugh at our cares,
So, if you should suppose that our song is jocose,
You're entitled of course, to your views,
But to us, her and me, it's a sweet symphony
And inspired by our mutual muse. 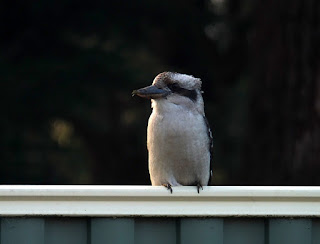 When I soulfully sing in the bourgeoning spring
With true poetry bursting my heart,
It is hard if I seem to express in my theme
Some coarse phase of the comical art.
And yet, what's the good? Since I'm misunderstood
I'm content to submit to the wrong.
And tho' "Ock, ock, oo, hoo" may seem funny to you,
'Tis to me a delectable song. 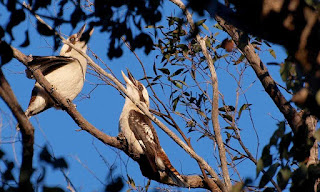 From The Singing Garden
by CJ Dennis
Gouldiae.
Posted by Gouldiae at 10:45 AM No comments:


A pair of Pied Currawongs is a fairly regular visitor to our tiny backyard here in West Gippsland. The Currawong is an omnivorous scavenger and has a varied diet that might consist of seeds, fruits, insects, small reptiles, carrion and even other bird’s nestlings. They’ve suffered from a bad reputation ever since settlement apparently.

I quite like their boldness as they raid the territory of other birds, paying little heed to species like the Noisy Miner trying to chase them off. The Pied Currawong has a variety of calls and there are even regional differences. In this area, the ‘hark-hark-the-lark’ sound is an iconic winter call that to my ear is rather pleasing.
A beautiful bird that we sometimes take for granted, the Galah, is a hollow nester and as always toward the end of winter, the pressure to find a suitable nesting hole begins to mount. With some friends recently, we spotted a bird busily chewing away at small hole high in a tall eucalypt in one of our parks. 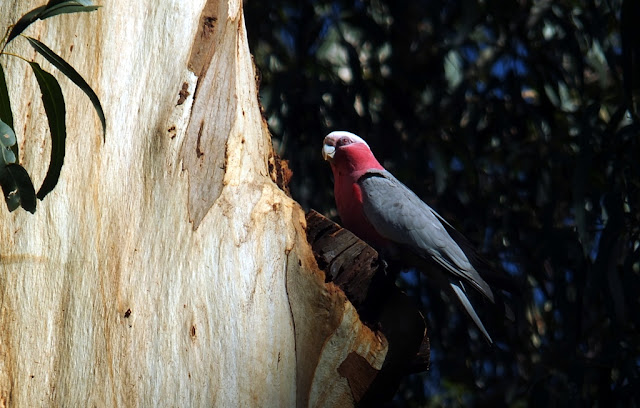 ‘The missus’ was patiently waiting nearby. I’ve often observed this species guarding a nice hollow for several weeks before laying and incubation commences and I suspect it will be some time before this female begins to brood. 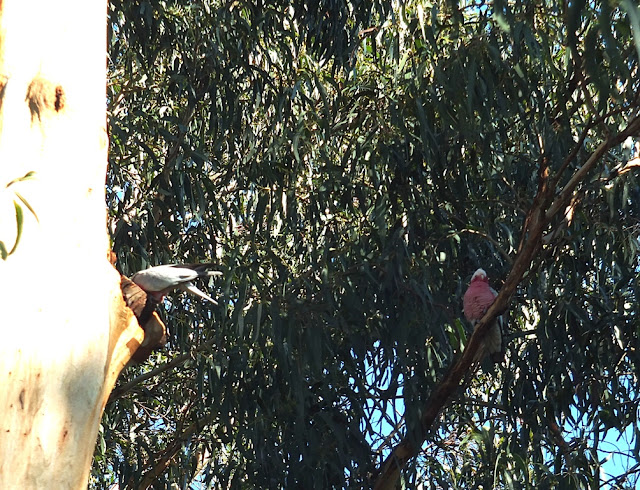 When the nesting chamber is ready, they will line it with green leafy twigs, something that no other parrot does apparently.
A strange fact is that although adult Galahs can live for many years, a lot of young birds will die in their first summer. Just 10% of fledglings will go on to breed.
Gouldiae


No I haven’t been to India or some other exotic location and seen a snake eating a snake! The Cannibal = Mt Cannibal Flora and Fauna Reserve and the Cobra = Cobra Greenhood, Pterostylis grandiflora. 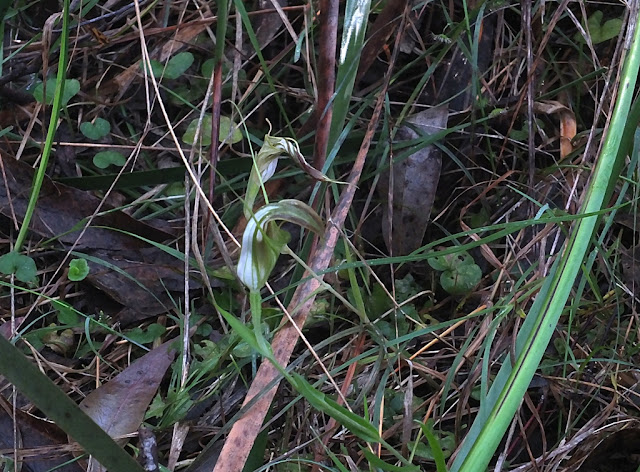 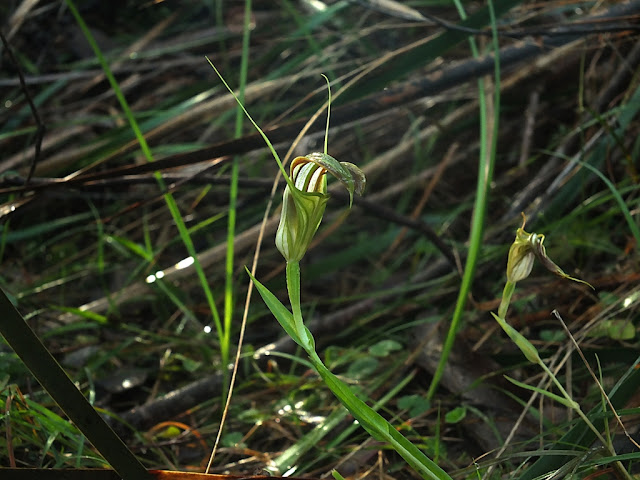 I hadn’t seen one of these at this location until today. I knew from David Piko’s site, Mt Cannibal Orchids, that the plant does occur here, but it had evaded me on all my previous ‘expeditions’. After searching the west face for two hours today, I found just one healthy single flower and one nearby on the way out and no others. Mind you the area I covered would represent a tiny percentage of the total reserve.


It is said that although Pterostylis grandiflora is a widespread species through eastern Victoria it is
not often seen in the wild and in some places the known populations are in decline, (Wild Orchids of Victoria Australia – Jeanes & Backhouse).

Gouldiae
Posted by Gouldiae at 10:50 PM No comments:


Between incoming draughts of Antarctic air masses, I grabbed the chance yesterday to visit once more the nearby Crossover Regional Park. Being the time of year and the very low air temperature I guess, birdsong was a bit limited – an Eastern Whipbird was ‘cracking’ away and getting no response from his mate and a pair of Grey Shrike-thrushes were keeping in touch with their ‘dite’ contact call.

Several pieces of Flame Fungus caught my eye and when I went looking for a photogenic sample, I could see that there was quite a bit of this member of the coral group poking up through the moss and leaf litter. I don’t remember seeing this species appearing in such a widespread fashion before.

Just as I finished getting the shot above, the camera battery went flat. I chose a nearby stump to sit on and change batteries, and in came a couple of charming Eastern Yellow Robins to check me out. They luckily stuck around until I got the camera going again. 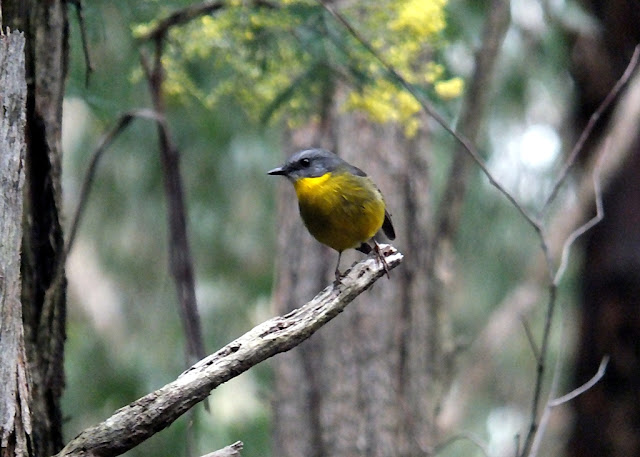 On the way out a yellow-orange fungus caught my eye, and it’s one I hadn’t noticed before. After getting home and checking Fuhrer, I think it is Discinella terrestris or Little Suns as I see someone online has appropriately called it.

Yet another nice, (if cold), day in the bush.
Gouldiae