This fairly common fungus usually grows on buried wood but I found these today on an old exposed stump at Shady Creek. 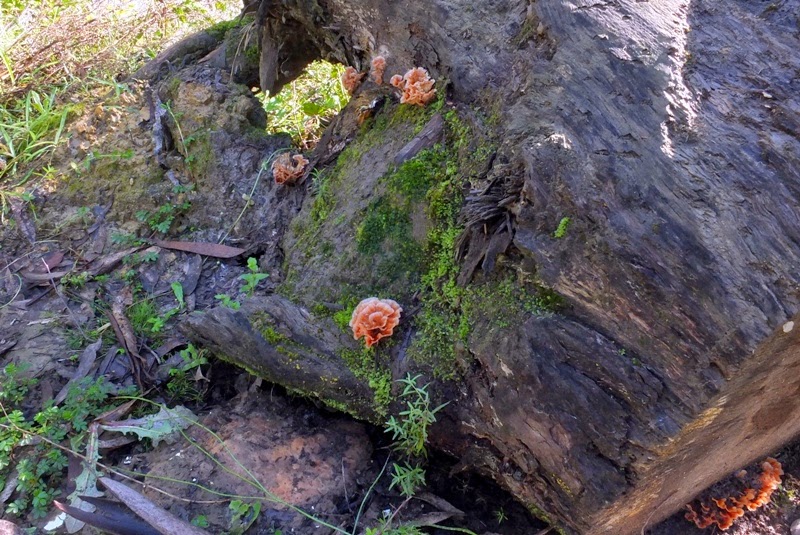 The funnel-shaped rosettes give this fungus its common name however ‘petalodes’ in the scientific name, Podoscypha petalodes, is far more descriptive of this species. To me it looked for all the world like rose petals. 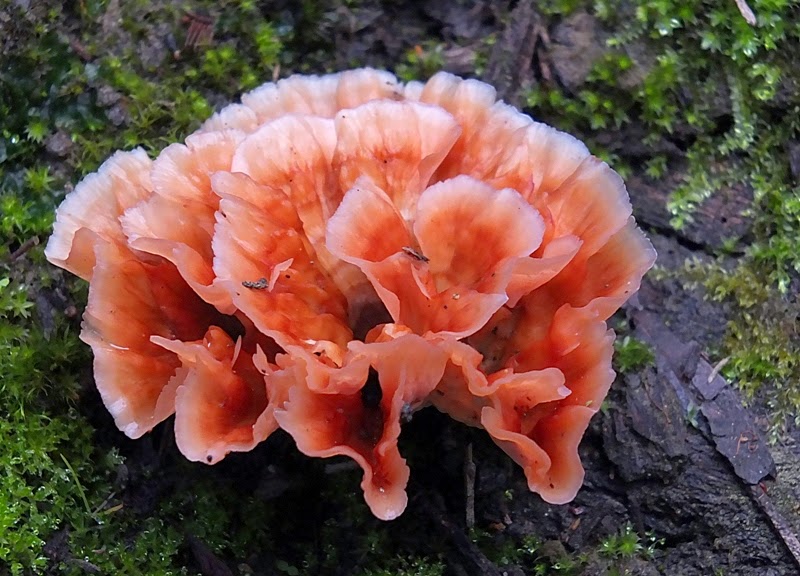 The fungus was soft and fragile too and I didn’t dare remove the bits of debris to try and get a ‘clean’ shot in case I damaged it.

I also lucked on to some Striated Thornbills today. These little beggars are so tiny and usually up so high they are beyond my camera’s reach. I haven’t had the opportunity to snap one of these little bush birds for ages. 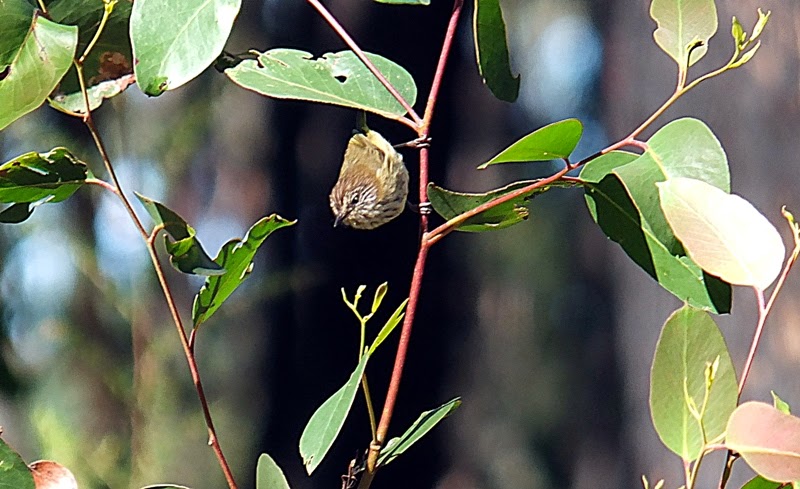 I was trying for the Pink Robin or the Olive Whistler again – no joy.
Gouldiae


I returned to Shady Creek yesterday. A couple of days earlier when I was just reccy-ing the place, I had a pleasant encounter with a Spotted Quail-thrush. Despite putting in considerable effort I couldn’t sight one again yesterday and I will have to try again later for a photo – I will just HAVE to.

I haven’t quite worked out the geography of the place just yet. I have discovered the locality is called the Sweetwater Creek Nature Conservation Reserve. The place is located on a bit of a north-south ridge and the eastern flanks slope down to the Latrobe River, (I think), and the western slope is catchment for Shady Creek. Once I’ve learned a little more about the place I’ll do a Pete’s Places entry.

The eastern slope of the NCR is covered with wire grass and bracken in between motor bike tracks! That’s being a little unkind as I did see some Common Heath in flower already. There were a few plants of the white form nearby too.
On the other side, (Shady Creek), in the wet gully along the creek I ticked an Olive Whistler, Lewin’s Honeyeater, Lyrebird, Brown Gerygone and perhaps a Pink Robin, (maybe).

I took a walk along a track leading away from the creek and came across a single fungus, that judging by the fresh soil around the sides, hadn’t long pushed through the surface. I think it is one of the Amanita species.
The fungi–insect symbiosis is not fully understood in many cases, certainly not by me anyway. One thought is that the flies are attracted to the fungi as a source for egg laying and in the process they help disperse some fungi spores.
This one was attracting flies and gnats.

About three weeks ago we suffered several days in a row of smoke from some controlled burns in the area and I came across a patch where one burn had taken place.
Not a good look at present, but it might be a good locality for some interesting wildflowers this coming spring.
Gouldiae


Daniel Solander was a Swedish naturalist who accompanied Joseph Banks on the Endeavour and together in 1770, they collected hundreds of specimens along the east coast of Australia. 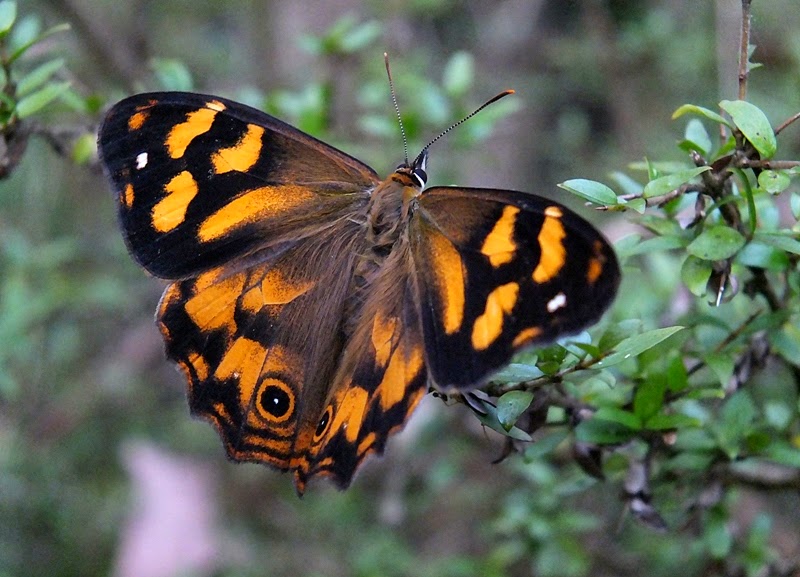 The Solander’s Brown Butterfly is a common species in Victoria, usually found in alpine and sub-alpine woodlands. 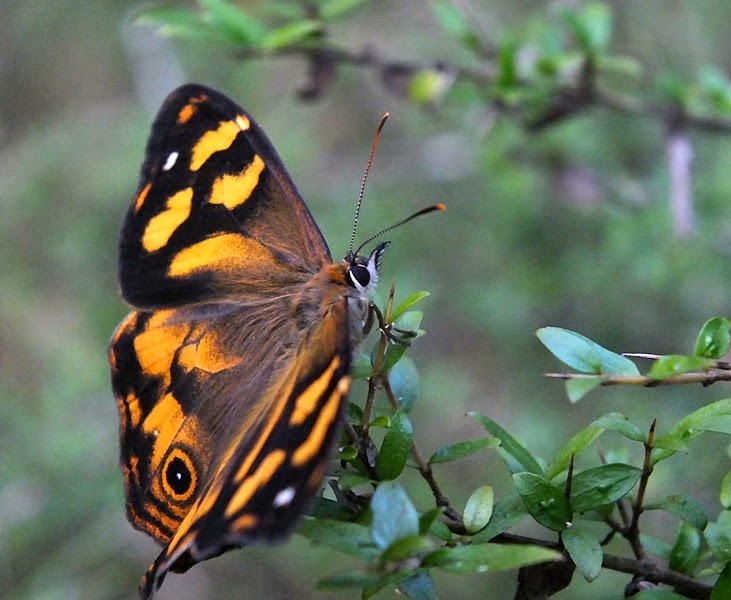 I think I was lucky to find this one yesterday in some bushland at Shady Creek just north of Warragul, as normally they finish flying in April. 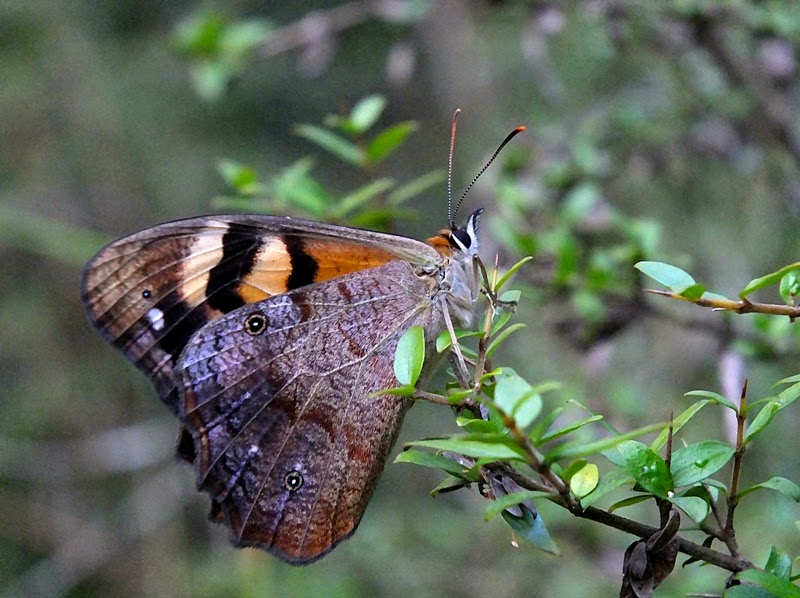 The Solander’s Brown Butterfly likes to use poa grasses and wiregrass as a host plant.


Although endemic to the four south-east Australian states, the Olive Whistler is classed as vulnerable in NSW and SA and is only secure in Vic and Tas, (BirdLife Australia link).

I remember my first sighting some years ago, it must have been for, oh I don’t know, 5 or 6 seconds perhaps? I wouldn’t have known what I was looking at except for my experienced bird mate and mentor who excitedly explained what we were seeing.

Since that experience early in my birding career, my sightings have been extremely infrequent and probably no longer in duration each time. Until a few days back, inside Mount Worth State Park, (Pete’s Places link), I lucked onto a pair that decided I wasn’t much of a threat and continued to flit in and out of view for 10 minutes or more.

Individual ‘viewings’ were still remarkably brief, and in the darkest of places, the densest of foliage, or nearly always with an over bright background, etc.

Two pairs of walkers passed me on the track, wanting to know what I was seeing. When I was able to point out the dull grey shape in the background they all just gave a virtual shrug of the shoulders and moved on, no doubt concerned for my sanity.

It was great fun and one day I might even get a decent picture of one!


The weather wasn’t great, but yesterday I headed to Jindivick for a short walk at Nangara Reserve. After being on ‘other duties’ for much of Easter, which I hasten to add was most pleasant, I woke with wilderness withdrawal, a syndrome I often suffer from. So far I’ve only found one solution – ‘Get out there’!

Three Fungi
Any good fungi field guide points out that most fungi begin to fruit after experiencing the onset of late summer/early autumn rains. A very large proportion of fungi in my district begin to show their fruit in April. Much research around the world indicates that fungi fruiting times might be good indicators for measuring climate change.

The beautiful little Pixies Parasol, Mycena interrupta, apparently the most recognisable small mushroom and frequently photographed, has begun to appear. I suspect this won’t be the last time I focus the camera on one of these beauties this season. Look closely and you can see the young, as yet unformed fruit just appearing. They often grow in colonies and I shall be keeping the eyes peeled. They grow on old logs, often amongst moss. 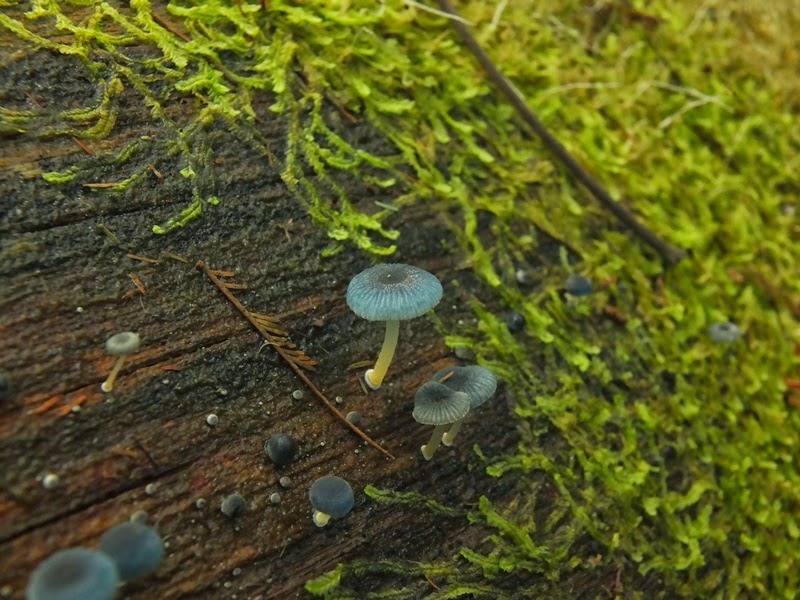 In spite of its tiny size it isn’t too hard to miss the Scarlet Hood, Hygrocybe coccinea, (I think?), in the leaf litter. Despite the dull, dull day and the very darkest corners of the reserve, that brilliantly coloured scarlet cap is a real giveaway – no attempts at camouflage here. 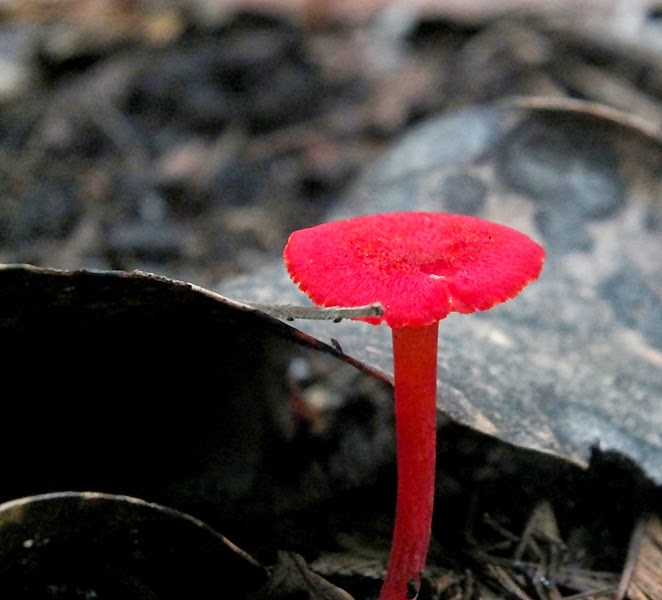 A very common early species in these parts is the soil inhabiting Parasol Mushroom, Macrolepiota sp, (probably clelandii). I reckon someone missed the chance to give this fungus the common name ‘cappuccino’, although modern day baristas are getting good at sprinkling all sorts of fancy frothy milk shapes on top. 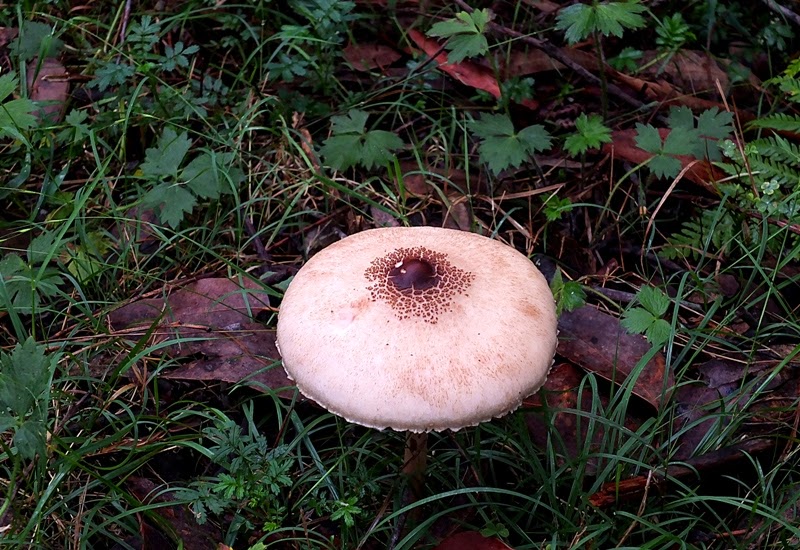 One Moth
I came across this Pink-bellied or Hakea Wine Moth, Oenochroma vinaria, (DF?), Patched Leaf Moth - Monoctenia falernaria, (thanks Mosura), struggling at ground level, pretty much on its last legs I suspect, but giving me great opportunities to get in close with the camera. 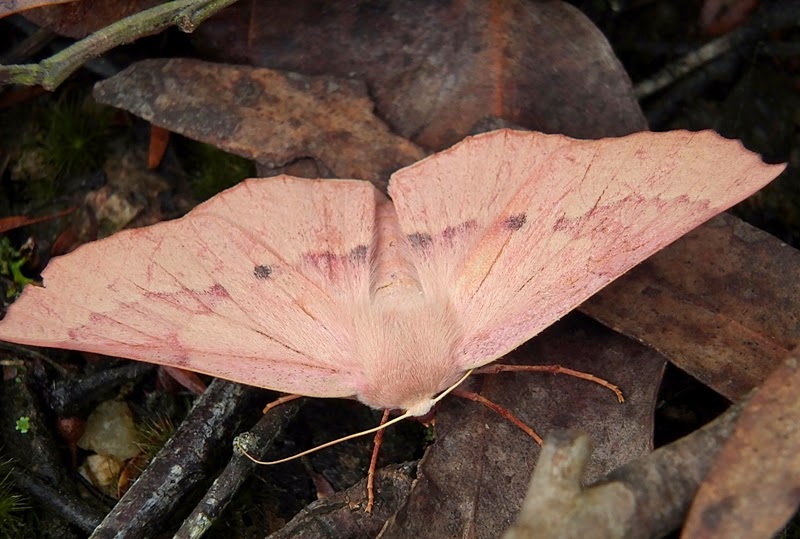 This frontal view shows fairly clearly the segmented legs, thread-like antennae indicating the female of the species, the compound eye of all moths and the labial palps which are thought to have a sensory role for identifying food, and the rolled up proboscis used to sip up the nectar or rotting fruit juices, etc. 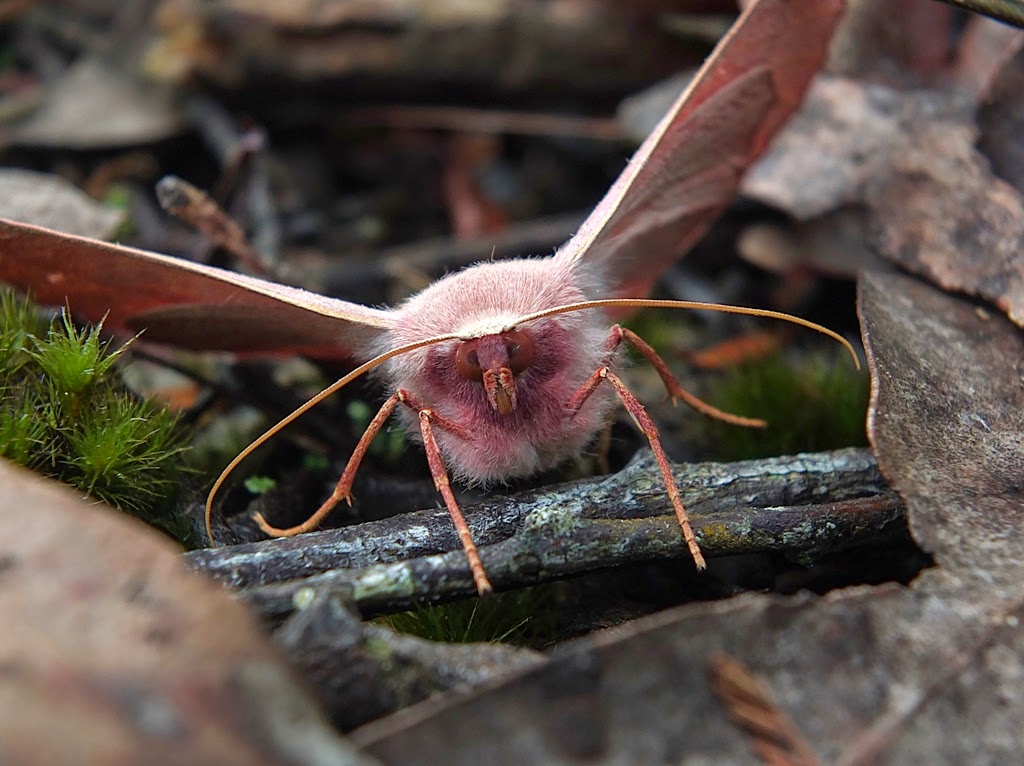 Any day in the bush is a good day.
Gouldiae