I’ve been lusting after a half decent look and photograph of a Rufous Fantail for several weeks now. I’ve ticked a bird or two in Nangara Reserve at Jindivick a couple of times recently but haven’t had one sit still long enough for a picture.

Yesterday my luck changed a bit when one bird sat quietly for a short while some distance away in some dense understory. I got some nice views through the bins, but my camera struggles in low light.
One image is a keeper and if I persist enough I may get that ideal shot of the beautiful rufous tail displayed one day.

On the way home through Longwarry North I came across three White-necked Herons ‘grazing’ on the driveway of a property beside the road. I did a quick u-turn and parked opposite and using the ute as a hide spent several minutes getting some shots as high speed traffic roared by without disturbing them.
On the rear bird you can make out the ‘landing lights’ on the fore-wings which apparently are a good identifier for the birds in flight.
Gouldiae
Posted by Gouldiae at 7:06 AM No comments:

Don't Turn Your Back On Me!


I did manage some acceptable front on images of all of the above except the fantail!

On a Hillside Somewhere


Life lately has been getting in the way of posting some entries to the blog. Apart from a very brief visit to Nangara Reserve a couple of days ago, (for a first-of-the-season tick of a Rufous Fantail), even my excursions have been limited. There needs to be some changes made!

The JPEG files always have plenty of material on hand however. The following images were obtained last month, once again in the Bunyip State Park.

The Blanket Leaf is an interesting small tree/large shrub that prefers wet sclerophyll forests. It is a member of the asteraceae or daisy family, numerically the largest and most varied plant family in the world. The long soft leaves with their ‘wooly’ underside are responsible for the colloquial name of ‘bushman’s dunny paper’! 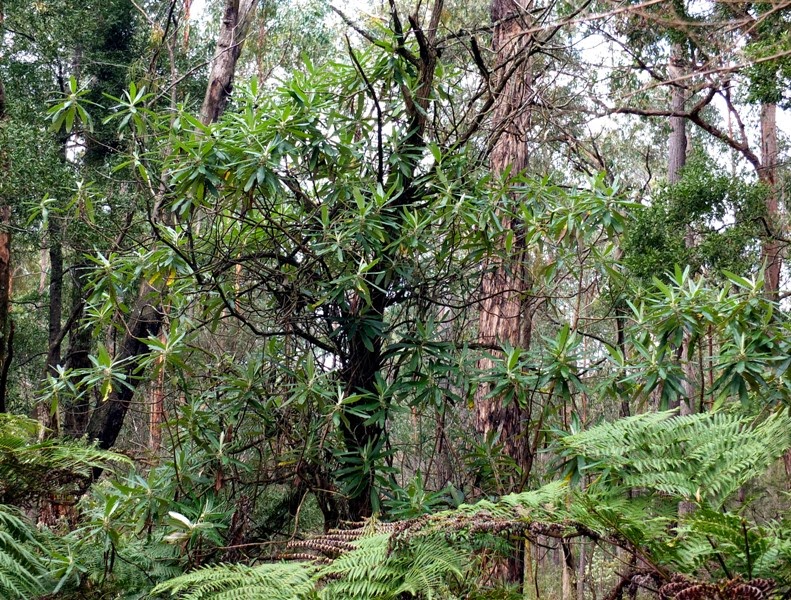 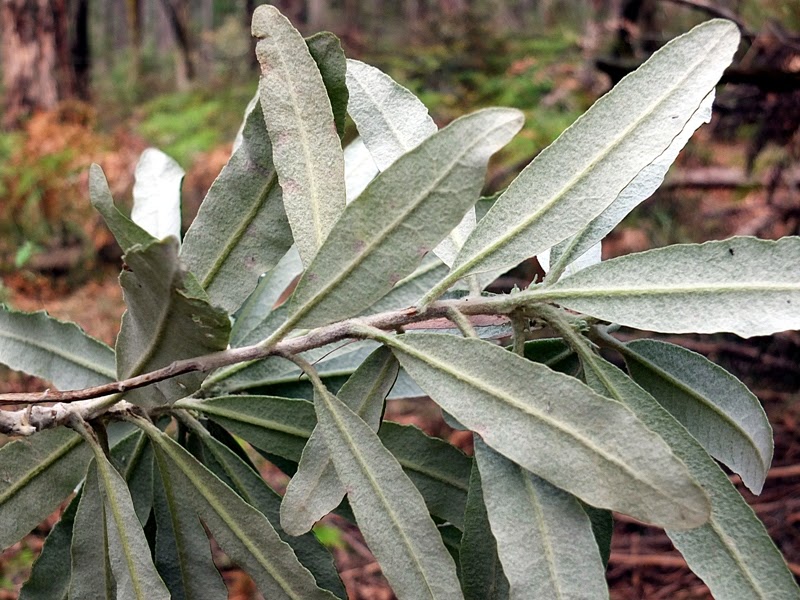 The Handsome Flat-pea is a common and widespread species and like nearly all peas has root nodules containing a Nitrogen ‘fixing’ bacteria that changes atmospheric Nitrogen into Ammonia which can then be used by other plants in the production of protein. Not only handsome but useful too! 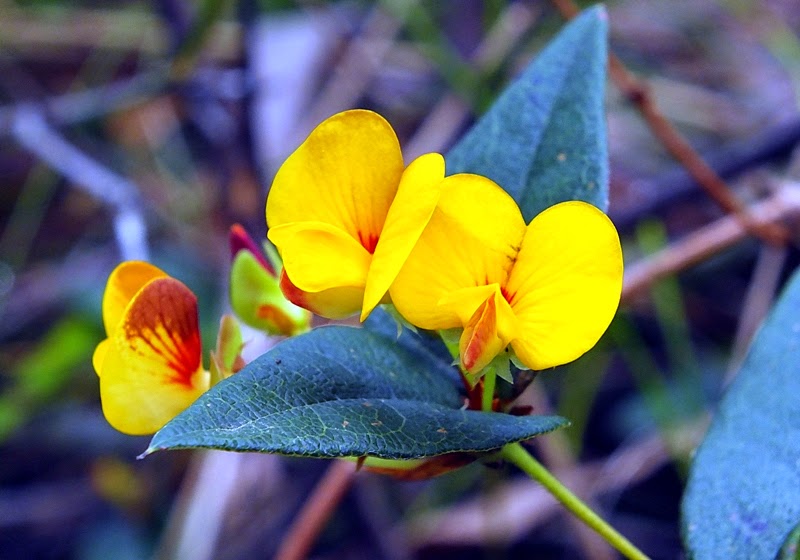 Tetratheca or Pink Bells is always a delight to come across in the bush. There are 50 or 60 species in the genus and they are endemic to Australia. My delight was heightened when I found plenty of the less often seen white form. 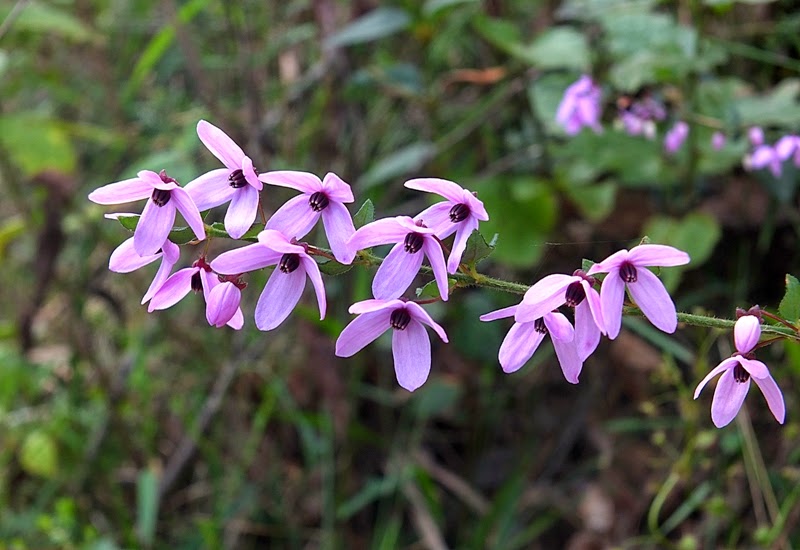 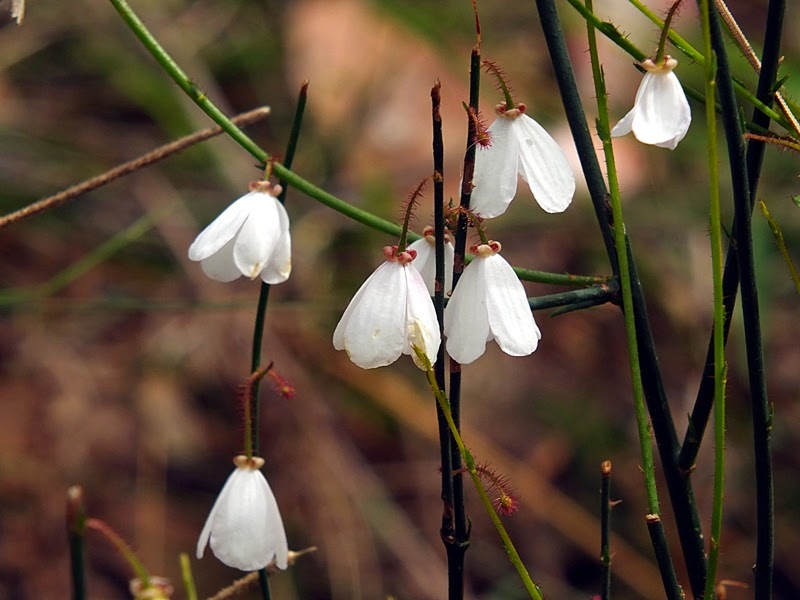 Another of the beautiful pea species I came across this day was the Rough Bush-pea with the wedge-shaped leaf. 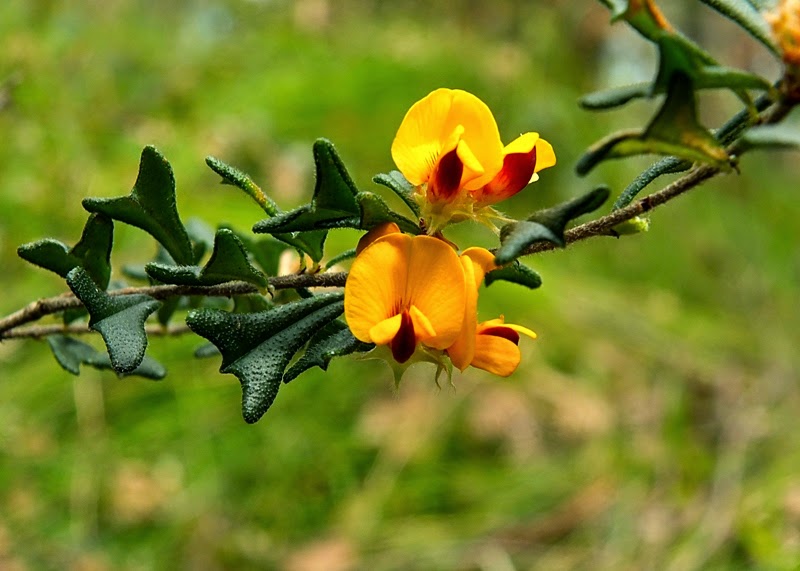 I remember the weather being a little dull but ‘any day in the bush is a good day’.
Gouldiae


A brief sojourn into Nangara Reserve at Jindivick yesterday in a vain attempt to tick a couple of favourite summer visiting birds did however produce a few nice sightings of butterflies and sun-orchids.

Snowy Daisy-bush and Forest Boronia were putting on quite a display and attracting plenty of insect life despite the rather dull day. Blue-wrens, Brown Thornbills, Grey Fantails, Rufous and Golden Whistlers were enjoying the feast but alas my two ‘target’ birds for the day, the Rufous Fantail and Black-faced Monarch failed to make an appearance. 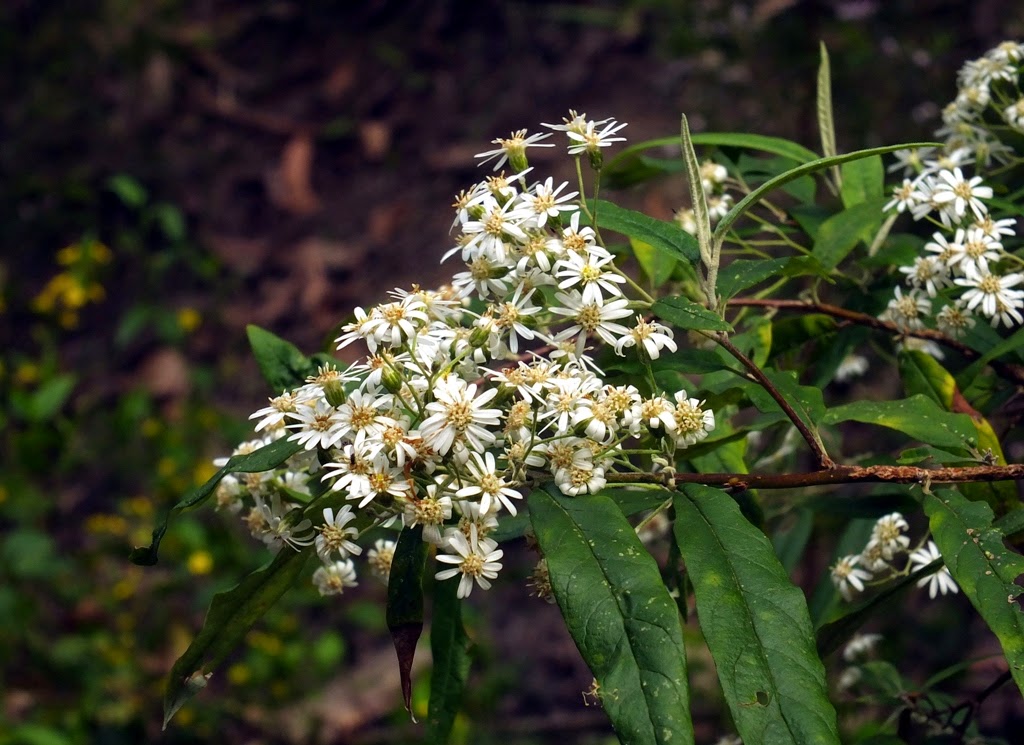 A couple of members of the Browns family of butterflies gave me a brief opportunity to switch the camera on to macro for a quick shot or two as they rested between fluttering flights. This Forest Brown came to rest on a gum leaf and with open wings - probably to warm up - provided a chance for a photo. 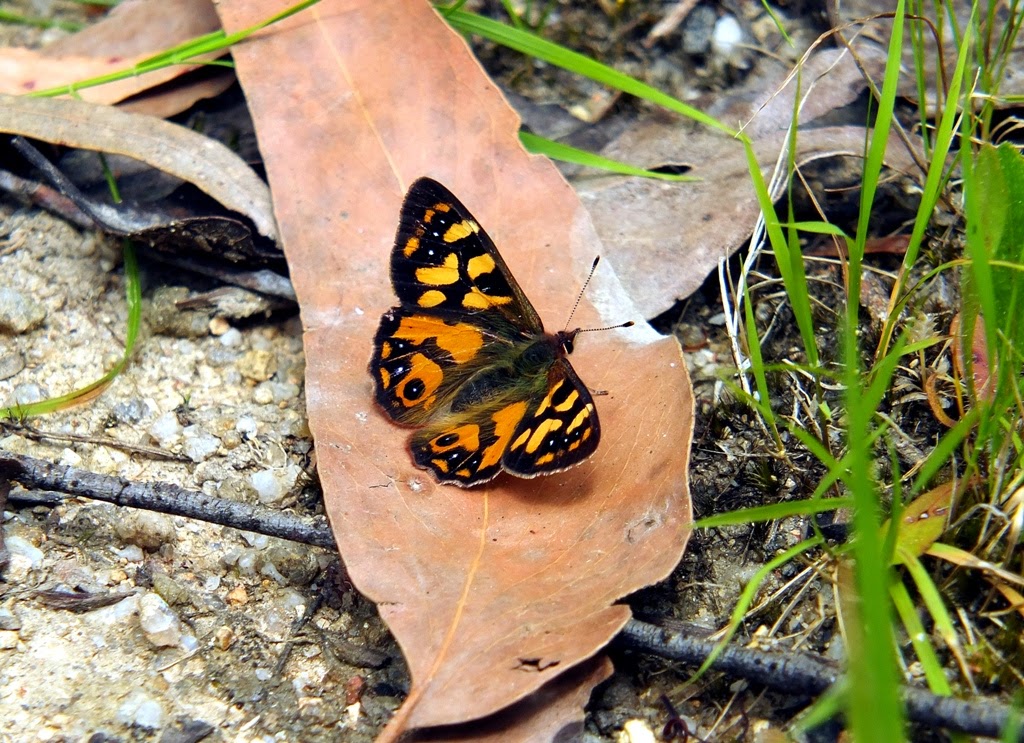 A little later a Swordgrass Brown fluttered by, pausing occasionally, but seldom using its favourite host plant, swordgrass, even though there was plenty in the vicinity. 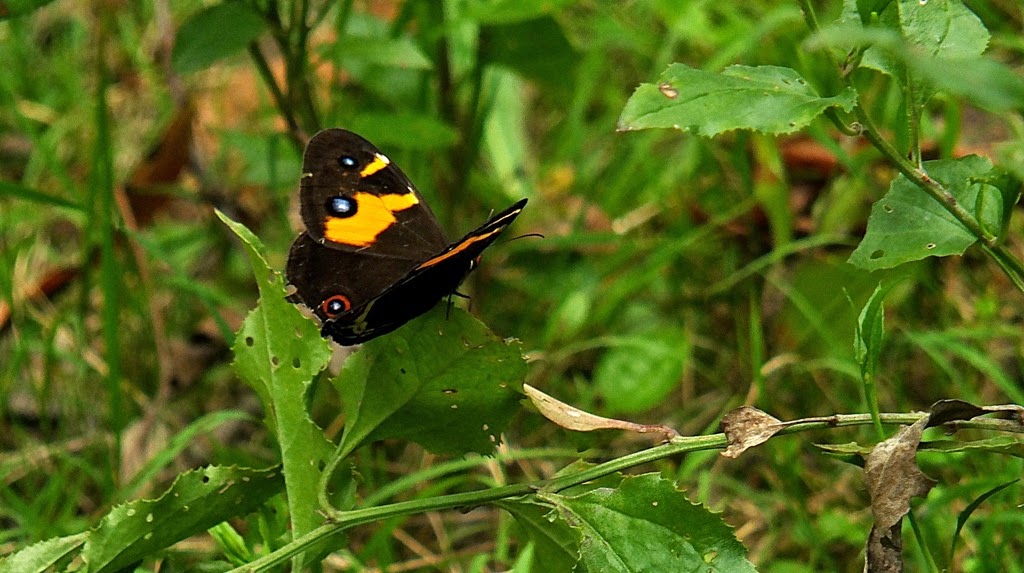 I came upon some nice examples of the majestic Tall Sun-orchid, (I think), too. In spite of the coolish and dull morning, one or two plants were in bloom. A partially open flower in one case was being attended by a visiting insect. 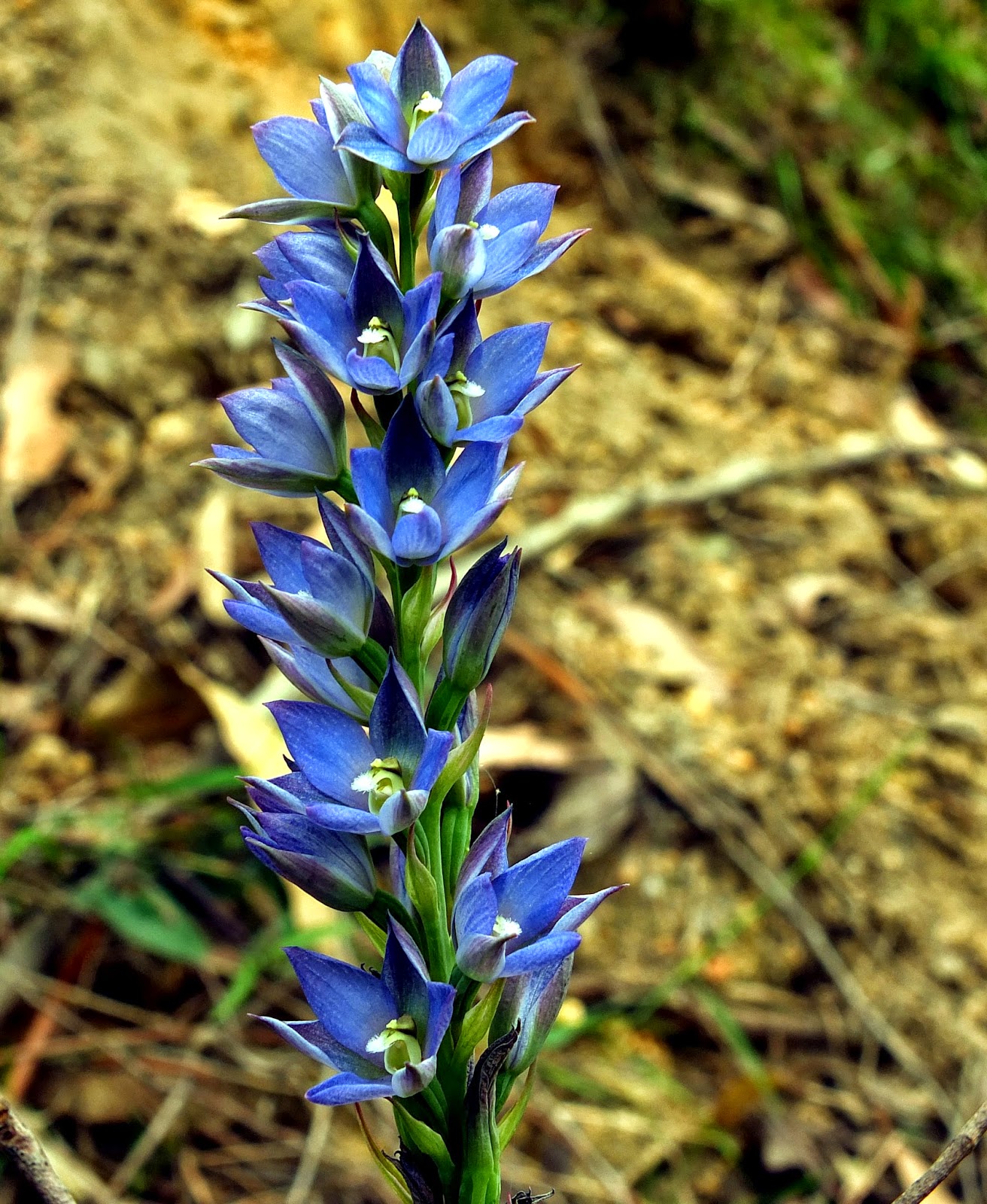 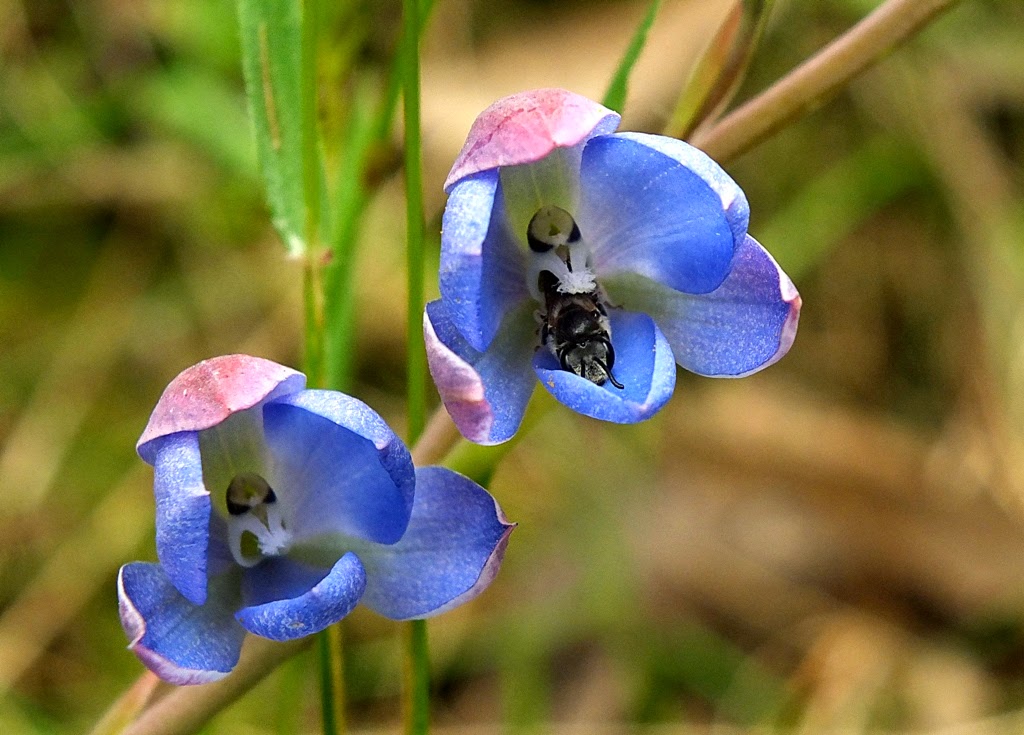 I dipped out on my target birds, but as usual a good time was had by all, (well just me actually).
Gouldiae


A few days ago some Heyfield Birdwatchers joined some of the Latrobe Valley Field Naturalists for a walk around the Button Grass Walk in the Bunyip State Park and I was introduced to some new and fascinating plants. Birds too, such as the Southern Emu-wren, Brush Cuckoo and Blue-winged Parrot and Restless Flycatcher were some of the better ‘gets’ for the day.

This walk is a good place to see a representative of one of the oldest plants still living – Bushy Clubmoss, a fern ally that is a descendant of a giant tree that grew 300 million years ago and reached heights of 20 metres.

Another interesting plant we ticked was Fairy Aprons. These odd little things are bladderworts  and are carnivorous – they have tiny bladder-like traps that capture minute prey that swim in water saturated soil.

The Buttongrass that the walk is named after grows in damp nutrient poor soils and is a sedge, not a grass. It has button-like flowers on the end of long stalks and is more plentiful in Tasmania where it is thought to be an important food source for the Orange-bellied Parrot.

Posted by Gouldiae at 4:59 PM No comments:

Of Ducks and Donkeys


A recent trip east for some bird surveys provided me the opportunity to visit a couple of favourite orchid sites.

At Glenmaggie the weird and wonderful Large Duck-orchids were in full flight. Despite the very dry habitat the plants were quite prolific with several patches containing perhaps a dozen or more specimens. I even ticked a double-header which to me is a bit unusual despite some field guides describing up to 5 flower heads per stem. (In NSW there is some concern for the Large Duck-orchid in regard to threatened losses due to hazard reduction burns!) 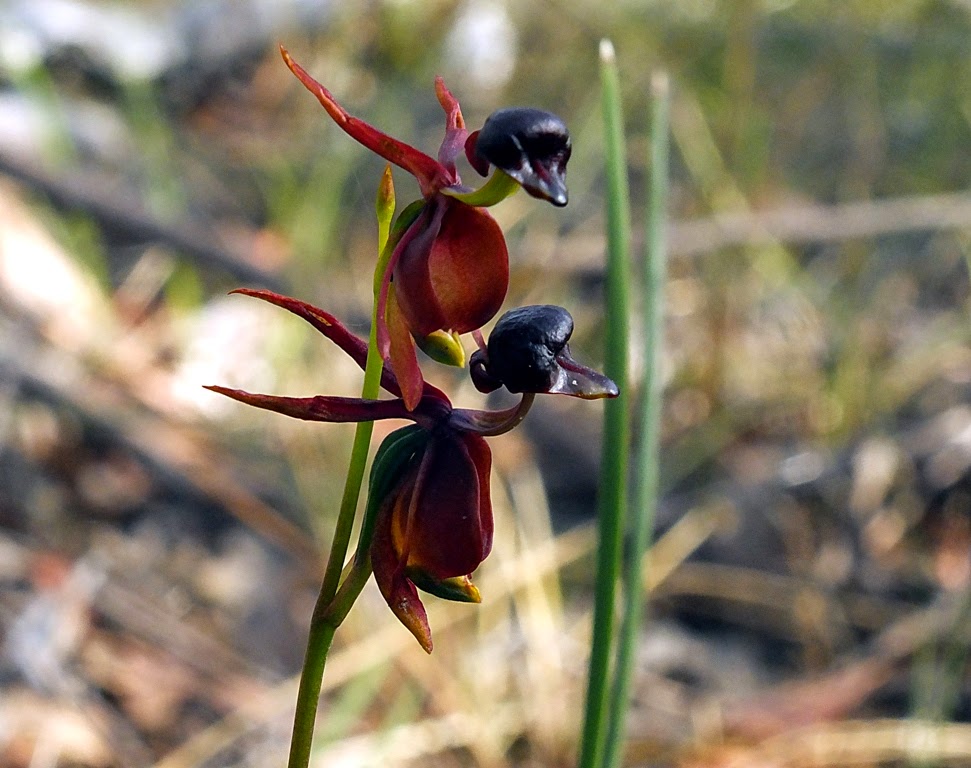 In the same spot I came across a few of the less common Small Duck-orchids. At this site these tiny orchids always seem to be growing closely to the trunks of Stringybark trees probably inferring some symbiotic relationship. In the pictures below a couple of the flowers can be seen in the closed position adopted to snare an insect for a short time to enable some pollen to be transferred. 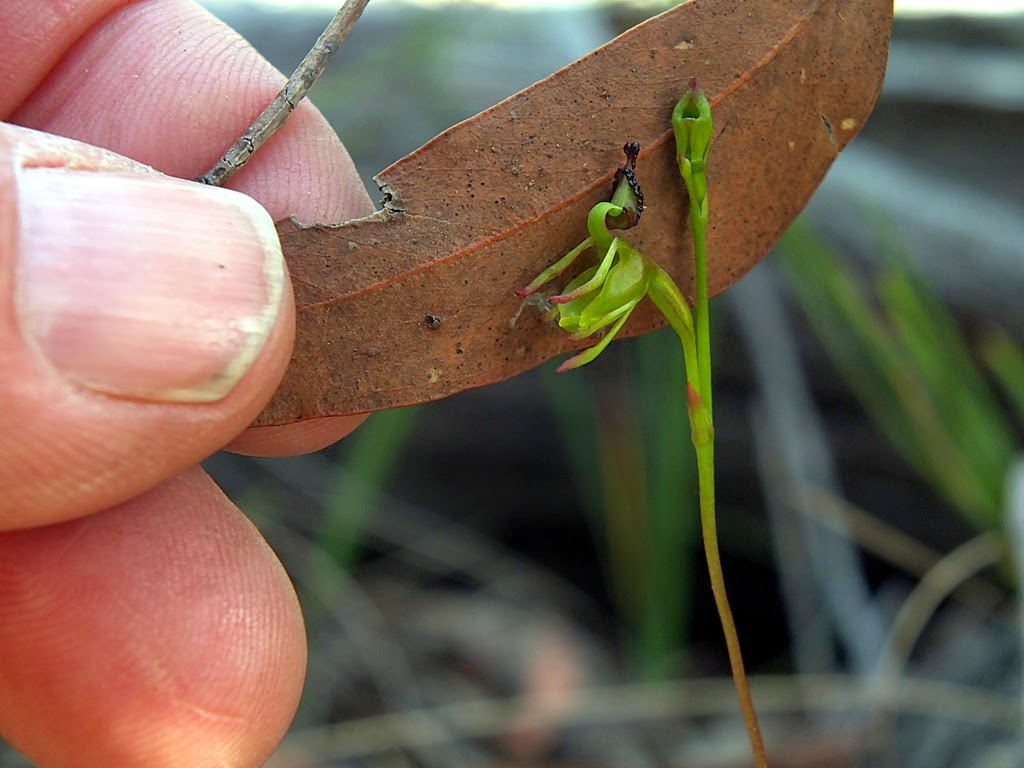 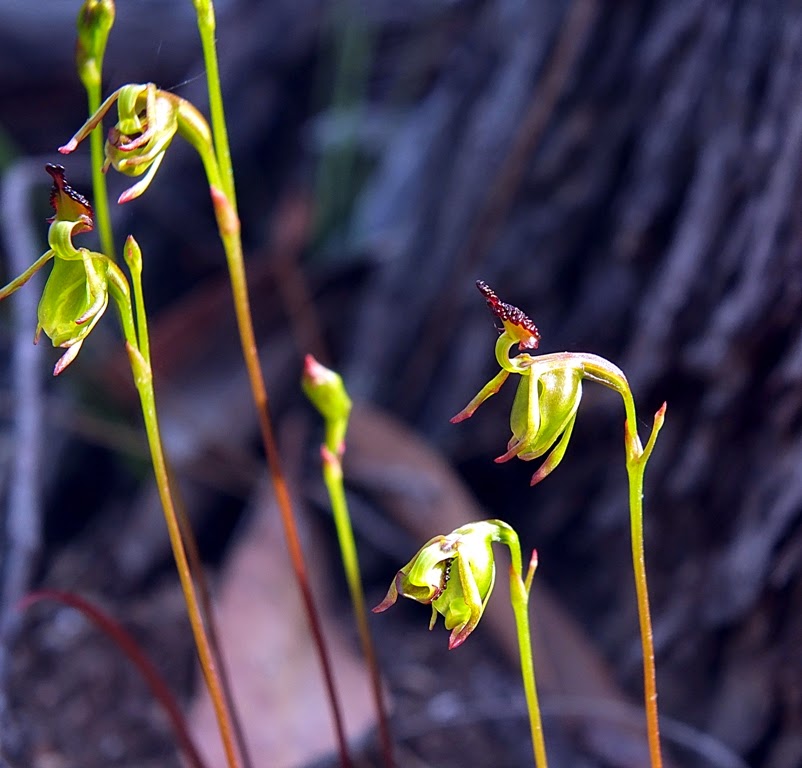 The Purple Diuris or Donkey-orchids at Longford were well represented too, with many hundreds of flowers being in bloom. Some were strongly coloured, others quite pale and I even found one or two almost completely white. 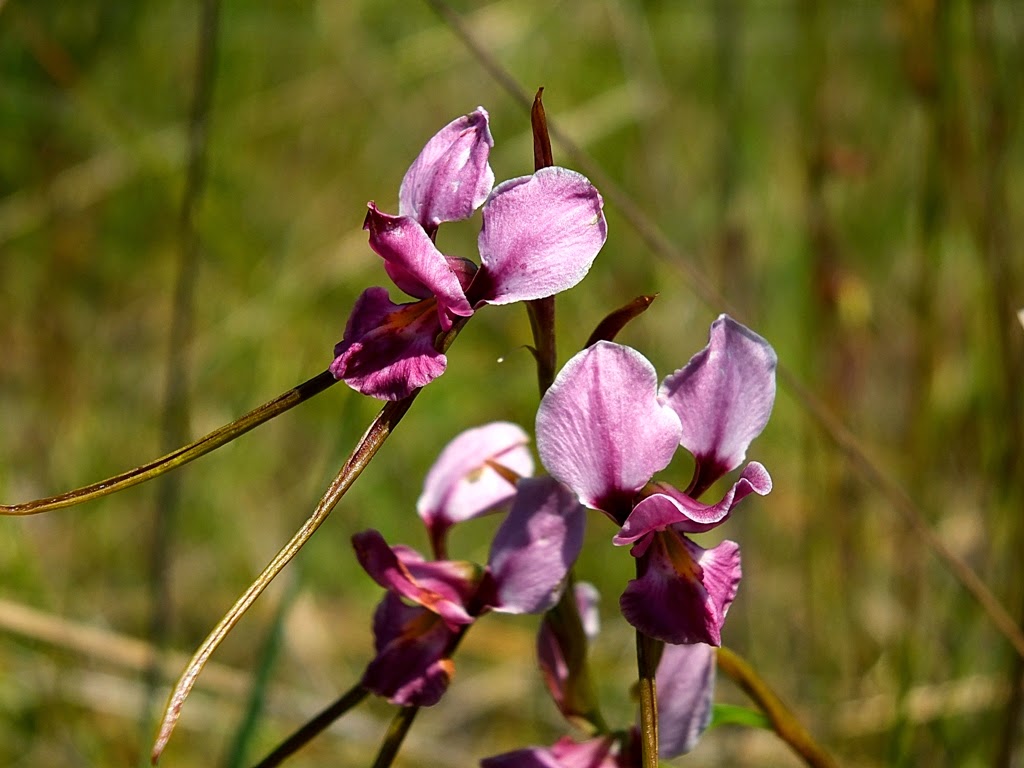 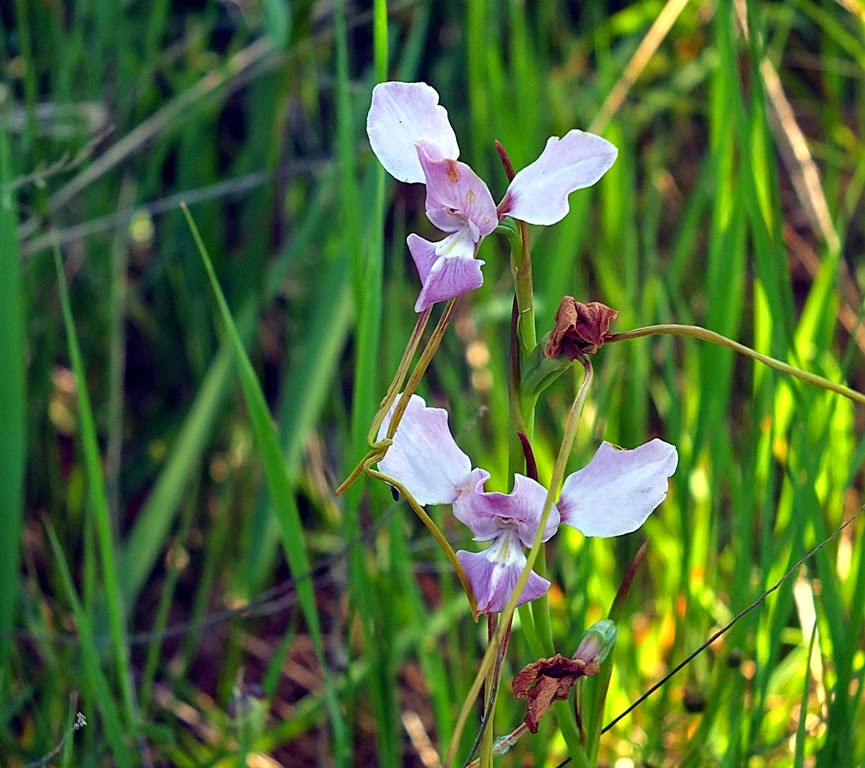 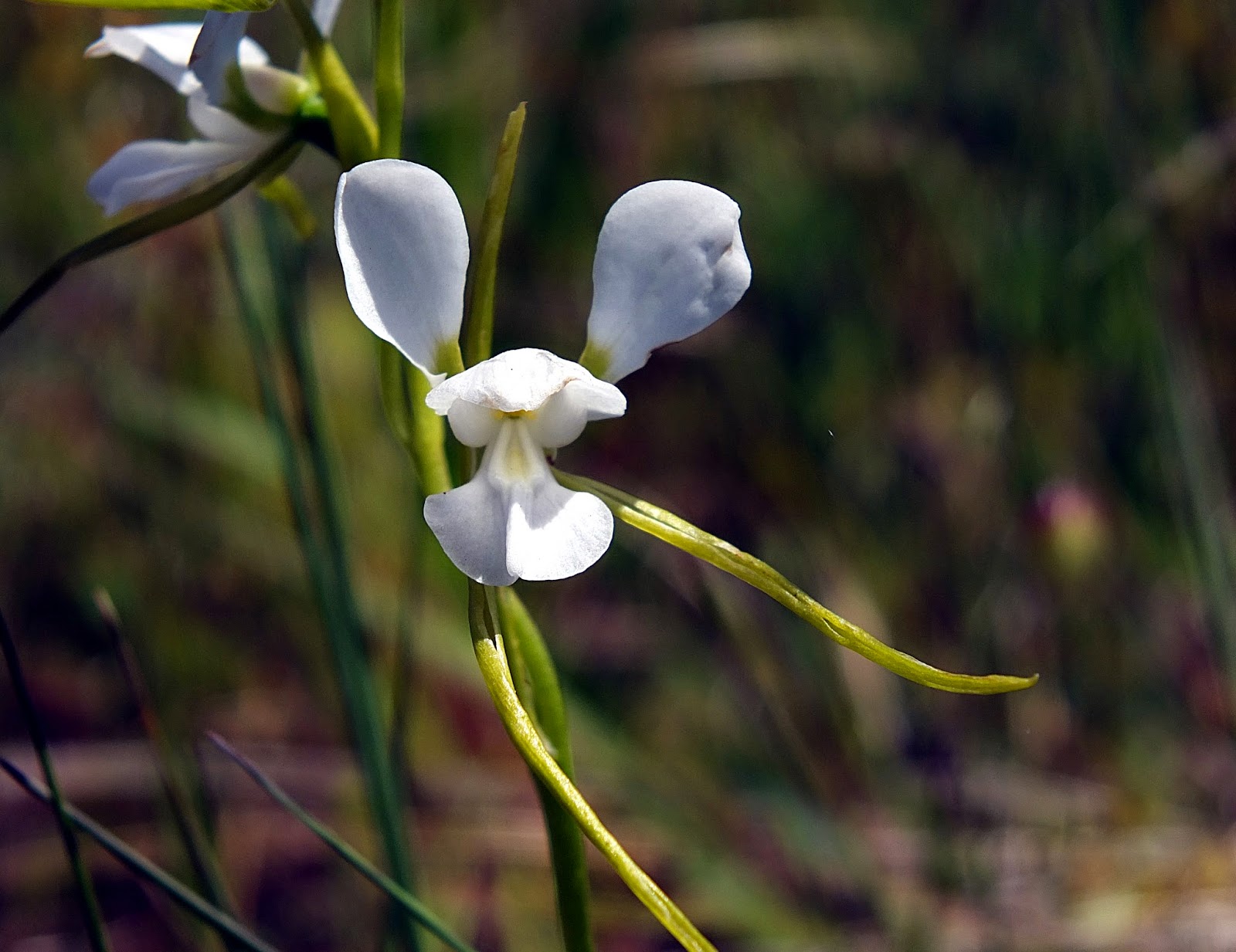 The Purple Diuris is listed as a ‘vulnerable’ species in the most recent DEPI list.
Gouldiae