G’day Everyone,
This entry is just a little follow up on the progress of the golf course Scarlet Robins.

They continue to say, “Good morning” each day as I walk to work. They sometimes will appear from nowhere then flit off somewhere else straight away and at other times they stick around for a chat. I’ve taken to scratching over the leaf litter in ‘our’ favourite location and they duck down to pounce on some miniscule morsel that I don’t see but they reckon will make part of their breakfast.

As you can see, the male’s left foot is still dangling but he seems to be coping quite well.

I did a quick scout around the garden with the spotlight tonight – relatively mild for a change. Three ringtails, one glider and an owl, (frogmouth I think). The froggy took off before I could get a good look. I’ve just put up a pair of roosting boxes of a design supposedly to suit the Sugar Glider, so I’m a bit hopeful they’ll stick around.

Some 'Golden Moments' at Wirilda


G’day Readers,
Meeting the train in Traralgon yesterday involved a few spare hours spent at the Wirilda Environment Park at Tyers. I caught up with an old mate who likes to fish. We chatted for a bit then went our separate ways for a while. The birding was a little more profitable than the fishing. 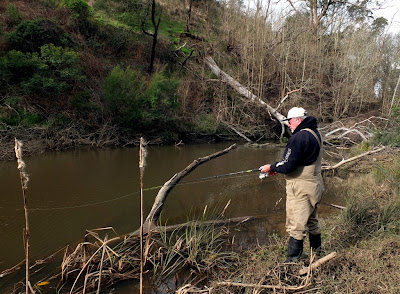 After kicking the blue wrens out of the way, I sat quietly for a bit next to the barbecue shelter and was quickly rewarded with New Holland Honeyeaters, Eastern Spinebills, White-browed Scrubwrens and that little charmer, the Eastern Yellow Robin. 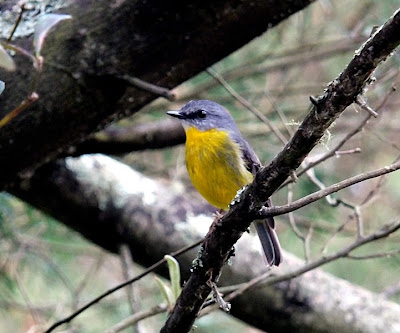 Many of the eucs were festooned with flowering mistletoe and this was providing a great food source for the honeyeaters. Yellow-tufted Honeyeaters were in good number and would dash into a mistletoe in a group and feed in a frenzy for a few minutes before speeding off again. It was only a matter of waiting a short while for them to return. 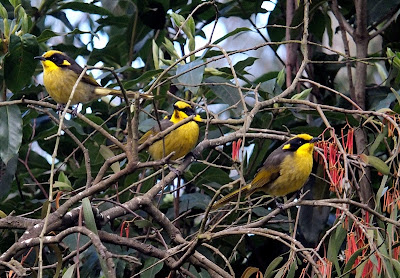 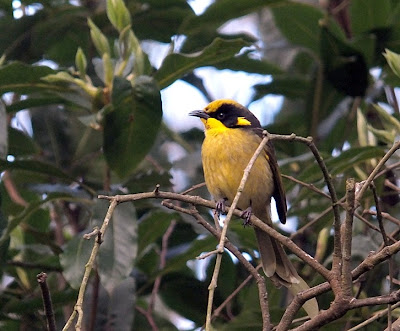 I caught up with the fisherman again for a bit and skited with some of the bird pics I’d managed thus far. As we talked old times for a short while, I was hearing a Lewins Honeyeater rattling away up the gully and I couldn’t resist trying to tick this well hidden bird.

Upstream from the fishing spot the vegetation is dense and damp with loads of leaf litter on the ground. The Lewins continued calling and I slowly closed in on the source of the sound. I sat for awhile and used the ‘I’ll wait for you to come to me’ technique that sometimes works – and it did. The bird suddenly appeared on a branch almost right beside me. 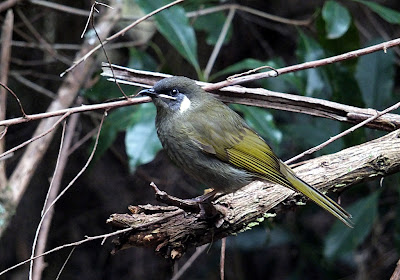 I moved on a little and sat again but nothing much was happening. As I scanned the track ahead I detected some movement amongst the leaf litter. Whatever it was, it would run and stop, run again and stop. Each time it stopped the bird would virtually disappear into its background. Eventually it showed itself on the edge of the track with green foliage and light behind it – a Bassian Thrush. 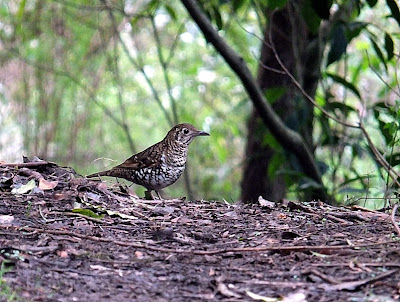 These secretive ‘ground thrushes’ are thought to be relatively common and they have a large range – the dense wet forests down the east coast from about central Queensland to the Victoria/South Australia border – but their quiet nature and stunning camouflage means they are often missed. 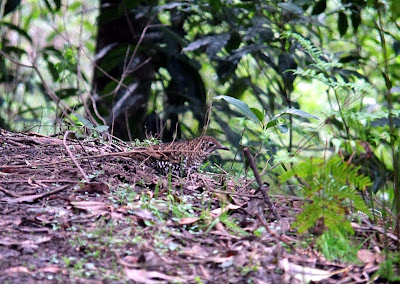 A wonderful couple of hours.  After conferring about a suitable location for the next piscatorial/avian adventure I headed for the station with my camera card a little fuller than DP’s creel.
Regards,
Gouldiae.

Posted by Gouldiae at 7:30 AM No comments:


G’day Folks,
Yesterday I headed north-east a few kilometers and squeezed in a couple of hours chasing some winter orchids. I’ve been watching closely the mosquito and greenhood sites on the golf course but so far we only have some leaf. (About a month ago I did tick a Tiny Greenhood though).

At Stockdale the Nodding and Trim Greenhoods were relatively profuse. Inadvertently I parked the ute on top of a couple of plants!

Whilst I was really trying to have a ‘plant day’, I couldn’t resist clicking an Eastern Yellow Robin that got just within camera range at one stage. I love seeing this little bird and just wish I could tick one on the golf course – they’re quite common in similar habitat very nearby.

In May last year I stumbled on some Cobra Greenhoods in this locality and after some ‘bush bashing’ through some thick re-growth areas I found half a dozen plants still flowering.

Here and there up on the drier ridges a brilliant Common Correa flower would catch my eye. I managed to find a single flower low enough and behind a log out of the wind to get a shot.
My wish list for the day included the Helmet Orchid but I dipped out there. Still, it was very pleasant - now I just need to wait a few weeks for the suite of terrestrial winter orchids on the golf course to show.
Regards,
Gouldiae.
Posted by Gouldiae at 6:08 AM 6 comments:


G’day Blogworld,
When I visited ‘my robin patch’ on the golf course this morning I was confronted with some views that dismayed me somewhat.  All was well at the start. The female was first in to say hello as usual. 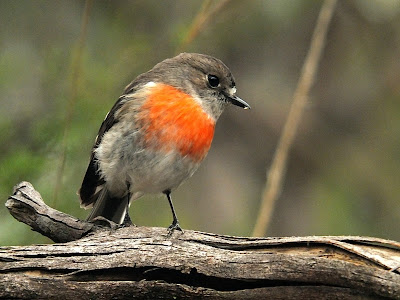 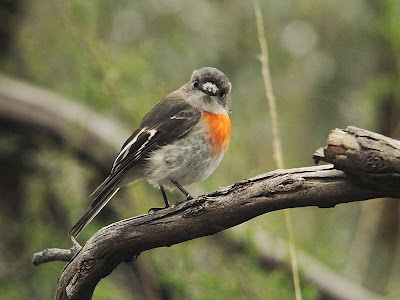 The male took a while to arrive and when he did so, he had difficulty landing on a perch. When he was finally settled, he remained in a crouched position. 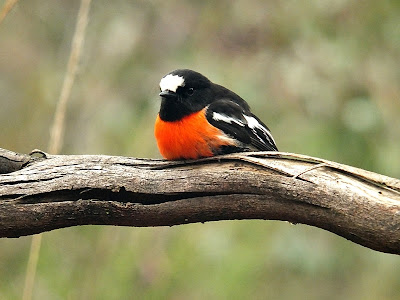 As I watched for a short while, he would sometimes stand and pick at his left foot. I saw then that he has some sort of major trauma to his left leg/foot. 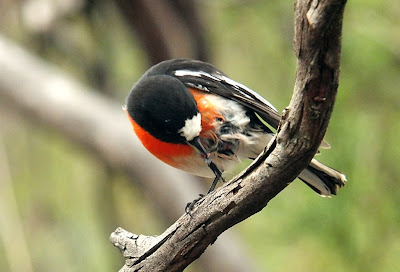 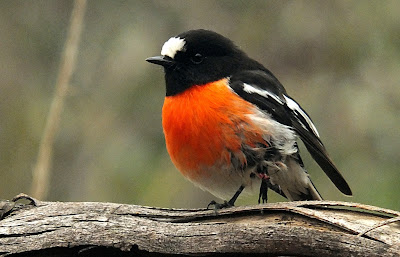 Poor little b…...! I wonder how that happened. The pair sometimes spend time feeding in a neighbour’s paddock in the usual robin ‘perch and pounce’ manner, perching on the top strand of a barbed wire fence. Did he get his toes hooked in the fence?

I shall try and remain positive and be secure in the knowledge that often wild creatures can be quite resilient in these situations. I’ll keep you posted.
Regards,
Gouldiae.
Posted by Gouldiae at 12:45 PM 3 comments:

The Wattles Have Started


G’day,
Our current bout of wintery weather in these parts hasn’t stopped some regulars from making their appearance … the wattles. We have something like five or more different species on the golf course and there will be some golden flowers on show for something like at least the next three months.

The first indigenous variety to show some flower this season has been the Hedge Wattles. 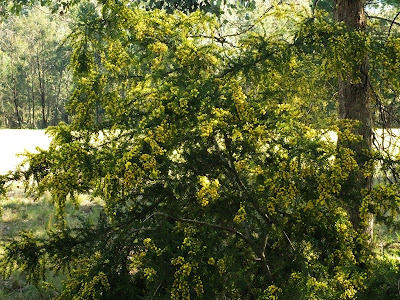 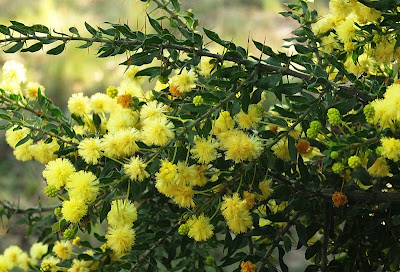 Paradoxically, (heh, heh), the shrubs in the pictures are loaded with blossom and yet the main stand of this species in another locality seem hardly to be in bud.

The first of the Golden Wattles amid the box bush is just starting up too. The side of the 16th fairway last year was a picture with this tree in flower. 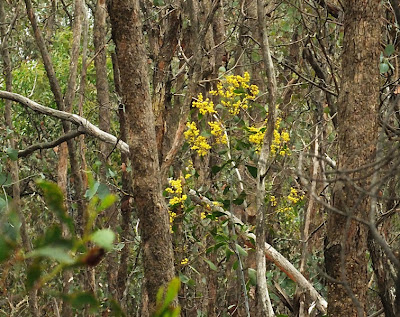 I still can’t help pointing the camera at the robins when they check me out – here’s another one. 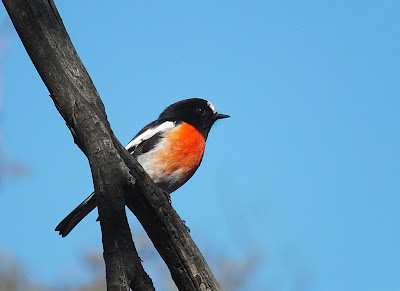 I shall endeavour to desist.
Regards,
Gouldiae.
Posted by Gouldiae at 7:58 AM 2 comments: