G’day,
The word got around a day or two ago that some Red-necked Avocets had discovered the flooded paddocks at the back of the RAAF Base east of Sale. I don’t recall sighting this endemic wader before and their presence in our district is pretty unusual, so I snuck away from spraying the greens and headed over to the site. 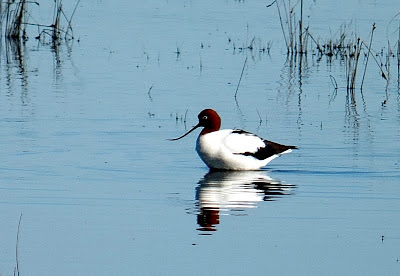 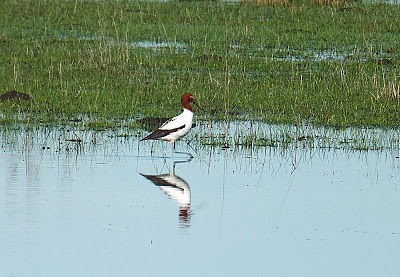 Closely related to the stilt, which we do tick fairly often in these parts, the avocet uses its dramatically upturned bill to sweep the water rather than the mud for small aquatic life. 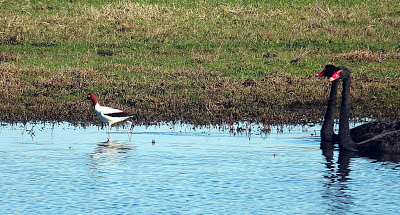 The heading of today’s entry of course is the scientific name for this species. Although I usually tend to steer away from such ‘technical matters’ here, I found it interesting that I could understand the meaning for once – ‘a curved billed bird from Australia’!

Thanks for ‘the heads up’ Val – now, back to the spraying.
Regards,
Gouldiae.

What's In a Name?

G'day,
What are we – birdwatchers, bird watchers, bird-watchers, (ugh), birders or twitchers? Yep, getting desperate for a blog entry.

‘Twitcher’ apparently arose in England in the 1950s when two eminent birdwatchers Bob Emmett and Howard Medhurst would together scour the countryside particularly for rare sightings, using Bob’s motorbike for transport. Howard riding pillion would often arrive at their destination chilled to the bone. Whether it was just the cold or combined with the excitement of the ride and probably the anticipated sighting, Howard’s response was to shake uncontrollably for a time. Amongst their friends it became a standard joke and soon ‘twitcher’ became a common term for a serious birdwatcher.

Twitchers are often list chasers or ‘listers’ and in some circles they may have an undeserved derogatory reputation. Most birdwatchers it seems would prefer not to be referred to as a twitcher.

Although ‘birder’ and ‘birding’ are used more frequently these days, they are not especially modern. Shakespeare’s The Merry Wives of Windsor, 1602, contains a line “… her husband goes this morning a-birding.” The ABA is the esteemed American Birding Association. ‘Birder’ and ‘birding’ appear in most dictionaries now and are considered synonymous with birdwatcher and bird watching, (not birdwatching however). The British body Birdwatch describes itself as ‘the home of birding’.

My label does not concern me at all. I simply know that spending time watching birds and plants in their natural environment is one of the most soul satisfying things I know. Some would say I’m easily pleased.

Of late I have been pleasurably engaged by a Scarlet Robin on the golf course. I see this same bird almost every day. Every day I look forward to seeing it again. I can’t explain that. The bird appears in the same place at nearly the same time each day. Perhaps it’s the other way around and it comes to see me? I just sit quietly and it approaches cautiously and we eyeball each for a few minutes. Why should I feel chuffed about that? 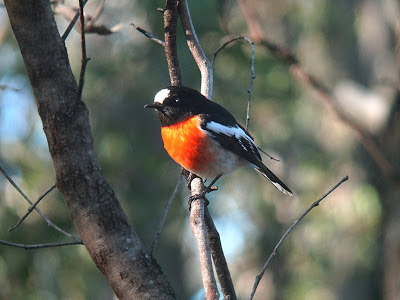 I have some standard answers to those who question my favourite pastime –
Birds are beautiful.
Birds are fascinating.
It’s always good to learn something new.
Bird watching can be done almost anywhere.
It’s a relatively cheap recreation.
It’s a healthy, relaxing outdoor activity.
Bird watchers are friendly people – usually!
Now I think I will add – bird watching feeds the soul.
Regards,
Gouldiae.

I'm sorry about this - the title and pictures today are a bit of an 'in-joke'. Normal service will be resumed shortly. 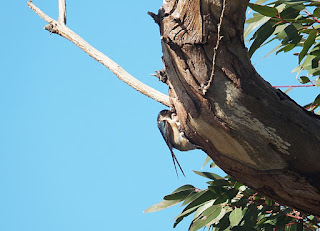 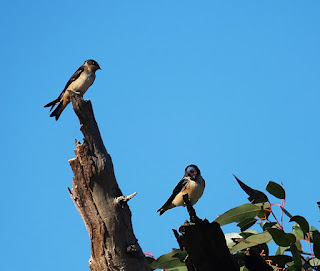 PS: Happy Winter Solstice to all my pagan followers!
Posted by Gouldiae at 6:23 AM No comments:


G’day All,
Here in Gouldiae land at present there isn’t much opportunity to get out and about – 180mm of precipitation so far. I’m not complaining, but.

Some visitors to the scattering of seed on the edge of the driveway yesterday gave me the chance for some garden portraits.

The Crimson Rosella seems not to be as prolific as it was when we first moved here 10+ years ago. 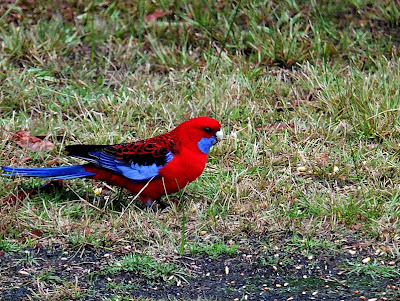 When I see the much more prolific Eastern Rosella, I’m reminded of the ‘coloufurl mess’ of an artist’s palette. 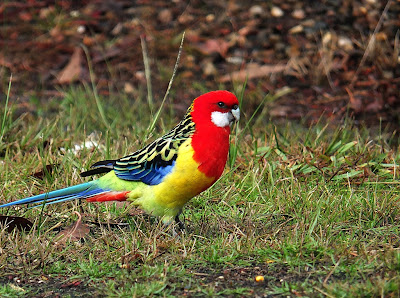 I hate to think of the number of jpg files there are in my King Parrot folder. It’s not easy to resist firing off some shots when the kings are about. 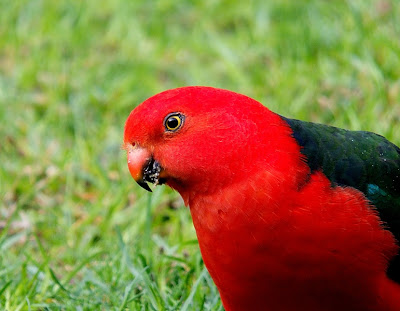 The common or garden maggie is best liked in this household for the morning choruses. When I’m outside, there is nearly always a pair that follows me about for some scraps should I turn a bit of soil or chop some firewood. 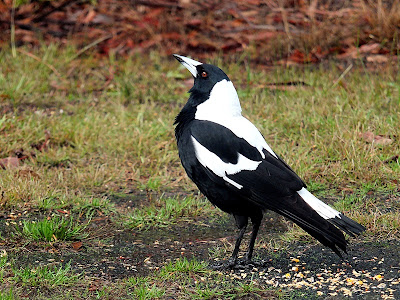 The bovver boys of the garden collection are the Rainbow Lorikeets. 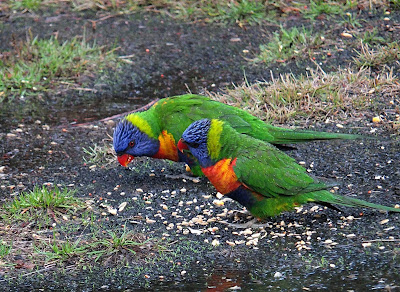 Whenever the parrots and others are getting a handout some of the resident Sulphur-crested Cockatoos never seem to be far away. They can arrive in big numbers sometimes and this usually is my signal to finish. 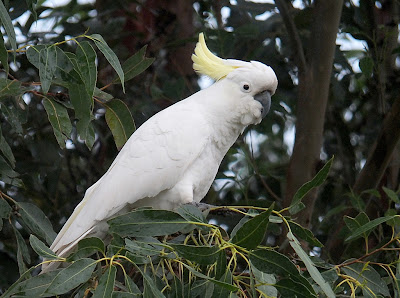 Oh well, it was something to do on a rainy day.
Regards,
Gouldiae.
Posted by Gouldiae at 7:10 AM No comments:


G’day,
8 brave, (foolhardy?), souls defied the weather forecast and headed east. Some impressions of the day included …
Nice numbers of Eastern yellow Robins.
A grey and swollen Mitchell River but not ‘running a banker’. 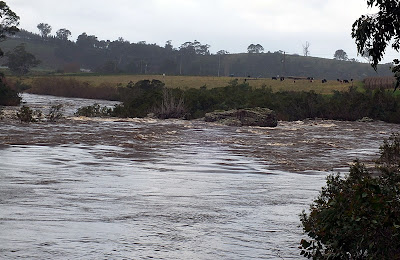 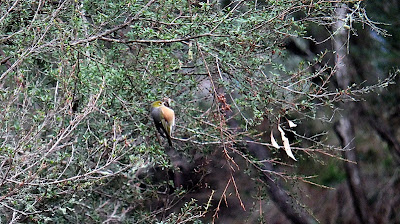 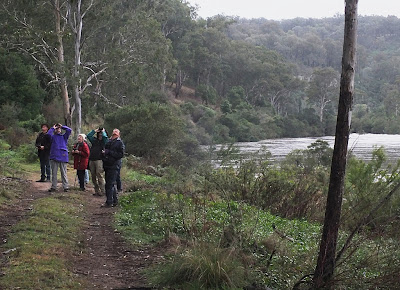 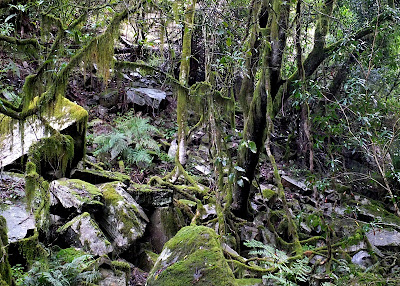 Nargun not at home – again! 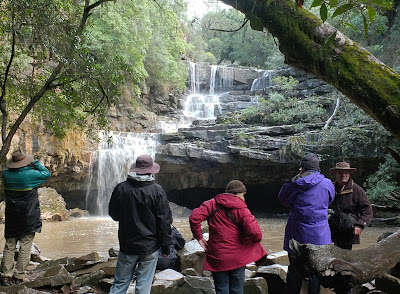 Coffee and cake at the Ticklish Turtle.
Regards,
Gouldiae.

Posted by Gouldiae at 7:33 AM No comments: