Many of the sandy ridges at Gluepot have an overstorey of mallee eucalypts and are covered with an understorey of spinifex or Triodia. Apart from its distinctive circular growing pattern, you quickly realise when you are amongst the spinifex, particularly if wearing shorts – the sharp needle-like leaves help remind you. 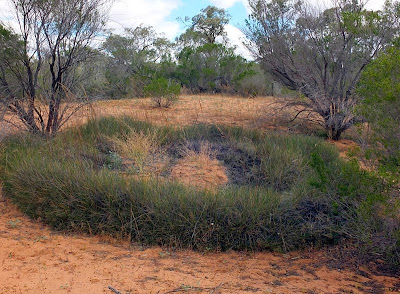 Young Trioda tussocks begin as a single clump and as time passes the plant grows outwards often leaving a dead or bare earth central portion. A 1m diameter bare centre represents a plant about 40 years old. Triodia ‘rings’ provide excellent cover for a range of lizards and mammals and the Striated Grasswren, (supposedly)!

Mallee Ringneck
There is something like four sub-species of the Australian Ringneck Parrot. The Mallee Ringnecks we saw at Gluepot often came to the water troughs at the same time as the Mulga Parrots and their size difference was quite evident.
Mallee Ringnecks are not a threatened species, being quite widespread and locally numerous but like most arid country birds are considered to be vulnerable to land clearing activities. 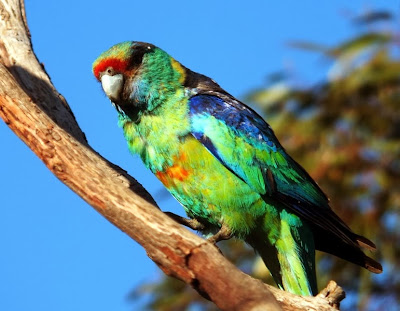 When feeding on the ground ringnecks can sometimes be approached quite closely unlike the mulgas which I always found to fly off immediately they spied me stalking them. 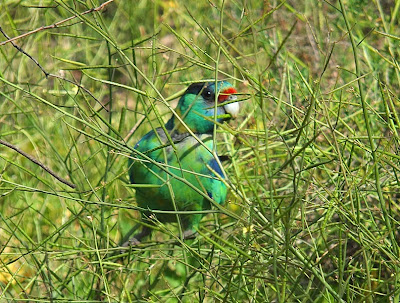 Ringneck parrots are endemic to Australia and are considered a popular aviary bird. They are strong fliers and yet are believed to be relatively sedentary within their range.


We cored the greens at 'Royal & Ancient' Heyfield Golf Club last week. When I say ‘we’, Steve and his team from JMJ Turf Renovations did the actual work! (Click on the pictures for a larger view). 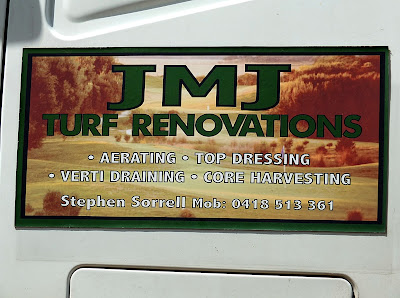 The members don’t particularly enjoy the coring process as it disrupts their golf – the course is closed for a day and afterwards the greens are difficult to putt on for around another week.

Tim operated the ‘corer’. This machine punches out cores or plugs of grass and soil to a depth of about 50 -60mm. 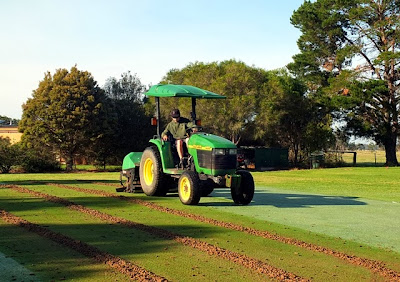 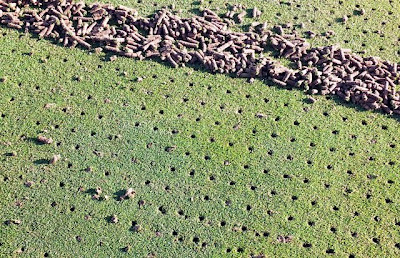 Steve then ‘sweeps’ up the cores and dumps them in small heaps. (Afterwards, we mix these cores with some sand and distribute them onto bare areas in the rough beside some of the fairways). 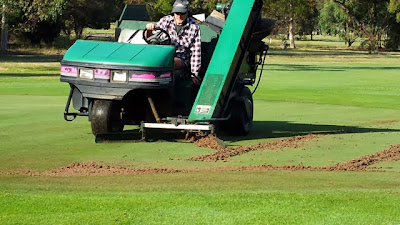 Once the cores were removed, John ran across them and spread a layer of fine sand. He was followed by Tom with the ‘Verti-drainer’, a machine that punches a fine hole 150-200mm deep into the sub soil, breaking up any compaction. 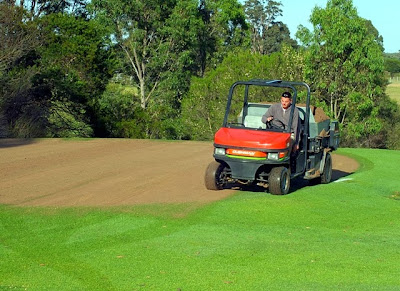 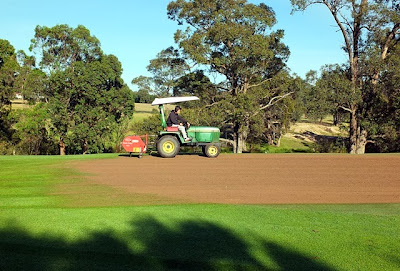 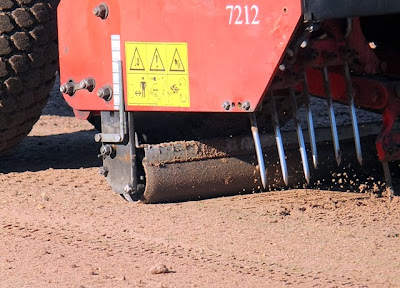 Over the next few days the top dressing sand is gently swept into the holes and the greens are watered. The mowing height is raised a few millimeters for the next few cuts. The coring process is to aid the aeration and draining of the greens. After coring the greens respond more quickly to fertilizing and the grass is generally healthier. They drain better too, (and can dry out much more quickly). 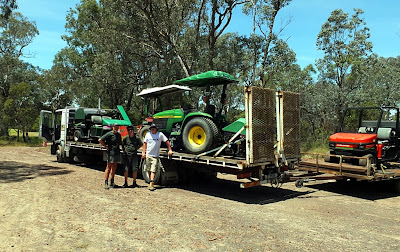 Gouldiae
Posted by Gouldiae at 9:35 AM No comments:


Yesterday, Mrs Gouldiae brought to my attention a Snake-necked Turtle behaving oddly beside the driveway. 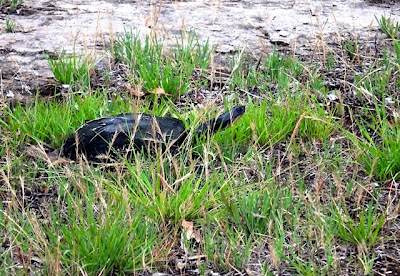 It soon become apparent it was a female digging her nest hole, something I’d not seen before. 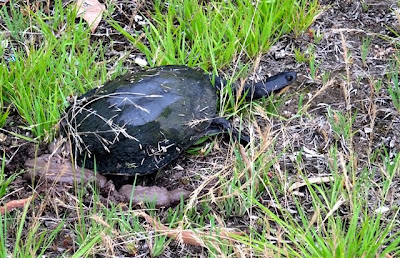 She let me sit nearby for some time and record her endeavours. Eventually she had the hole as deep as her rear excavating legs would reach. 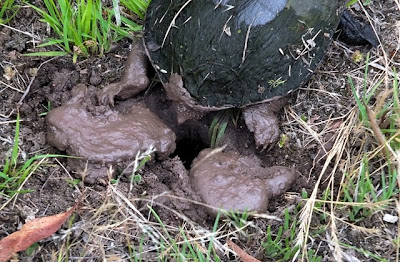 Next she maneuvered her cloaca above the hole and began laying. I watched as she deposited six eggs into the hole. After each one she reached down with one hind foot seemingly to check that the egg had dropped completely down the hole. 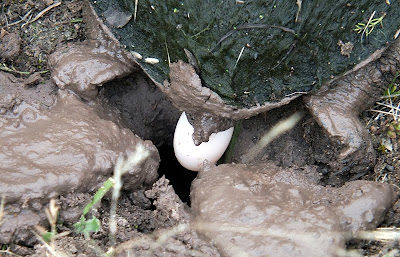 I saw six eggs drop into the hole but like all things ‘toirtesey’ it was a slow process and I retired for some relief for a short while so I’m not certain of the final number.

I then watched her fill the hole back in with some amazing maneuvers. Deftly she used each hind paw separately to scrape some soil back over the hole and then she used both paws in a cupping manner to drag the remainder into place. 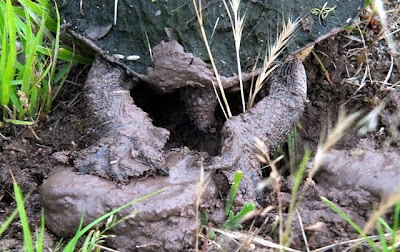 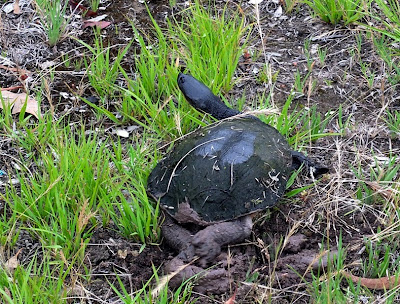 I was then astounded to watch her for quite some time as she tamped the raised surface back down to ground level by lifting her body off the ground by extending one or both hind legs then dropping back down onto the ground. 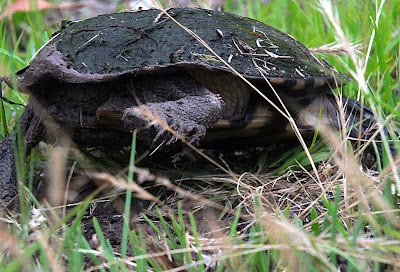 The end result was that the nest site was practically unrecognizable, (bottom right hand corner in the picture below). 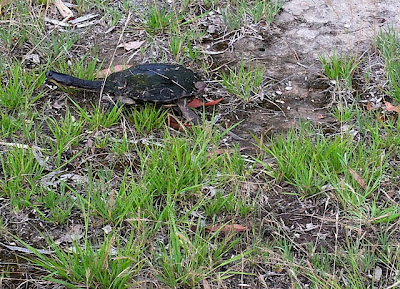 Satisfied with her efforts she ‘hurried’ off back to her favourite ‘watering hole’. 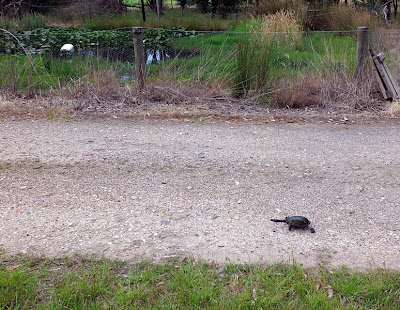 It would be nice to see the complete cycle and to observe the hatchlings in 130 to 160 days – I’ve made a note in the diary.

(Birds of course are not the only fauna to be threatened by our expanding urbanization – so too are the freshwater turtles and various groups are researching this.)
Gouldiae


Probably the single greatest threat to the habitat of Gluepot is fire. Land clearing, grazing and predation are being addressed. In 2006, fire destroyed about 8000 hectares and monitoring sites were quickly established to assess the effects on flora and fauna. Research projects studying the effects of fire mosaics are continuing. It has been determined that the Striated Grasswren will return to their favourite triodia habitat as little as 3 to 5 years after a burn. Malleefowl and Black-eared Miners however require habitat that has been unburnt for something like 40 years!

Southern Whiteface
This bird has a stubby little bill like a grassfinch and it thrives on a similar diet – primarily small seeds and some insects. 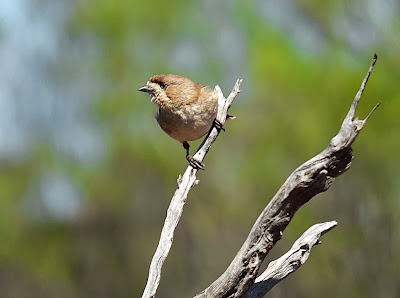 A bit like our Buff-rumped Thornbill, the Southern Whiteface has a preference for habitat with lots of dead trees, logs on the ground, stumps, etc. They use small hollows in dead timber in which to build their nests. 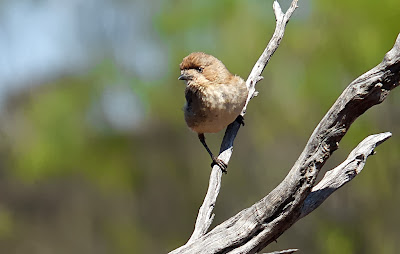 Although they occur widely in inland dry regions their numbers are thought to be in decline. Their shy nature has meant not a lot of information is known about the habits and movements of this bird. I was lucky to get one to pose in such an exposed position for a couple of very quick shots.
Gouldiae
Posted by Gouldiae at 11:18 PM 1 comment: 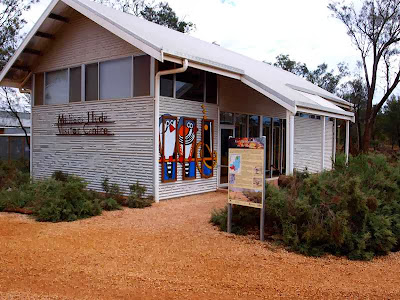 There are 95 permanent biodiversity sites that are monitored annually. Bird banding, mammal, reptile and vegetation studies are conducted continually. Plus, it’s a great place to see birds!

Crested Bellbird
The Crested Bellbird is widespread and endemic to the arid and semi-arid interior of Australia. Despite their familiar call – perhaps the iconic birdcall of Gluepot – they keep a very low profile and are certainly heard far more often than they are seen. 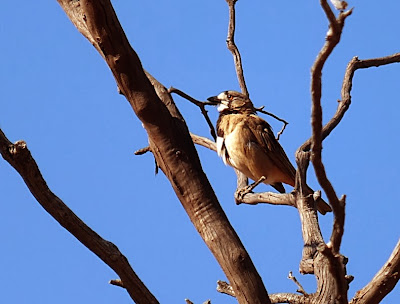 Crested Bellbirds feed mostly on the ground or in the low bushes and usually are solitary. The ventriloqual(?) effect of their call has caused me to spend plenty of time trying to track down a calling bird only to find, that when I’m standing under the very tree in which I’m certain I last heard the bird, it begins calling again from about 100metres away!

They seldom raise their crest, and THAT view of a male calling with crest raised is just another reason to return. 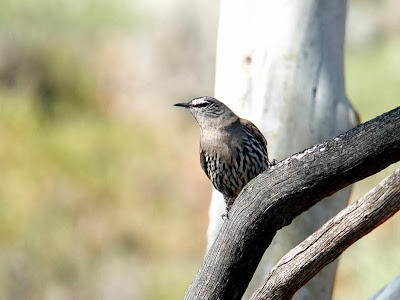 It ‘operates’ just as other treecreepers do and we found that at one particular hide there was a couple mallee eucs that seemed to be a favourite with this bird, with a continuous column of small ants stretched up and down the trunks and branches. 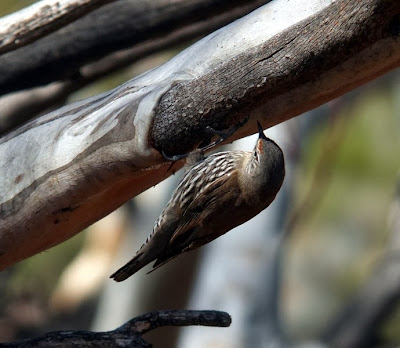 White-browed Treecreepers occupy the arid interior zone and in some states are listed as threatened.
Gouldiae
Posted by Gouldiae at 10:16 PM 1 comment: