G’day Blogworld,
Still alive here in Gouldiae-land. Busy as all heck but this morning I ducked out to that piece of private bush at Dawson again. I’ve been keen to keep an eye on a Wedge-tailed Eagle’s nest on the block and John gave me the heads up that he’d seen a pair of wedgies in the vicinity when he was cutting hay recently. Nest was quiet but the wedgies did appear while I was under the tree. At first they didn’t see me but the moment I moved to get a better view with the camera they were off. 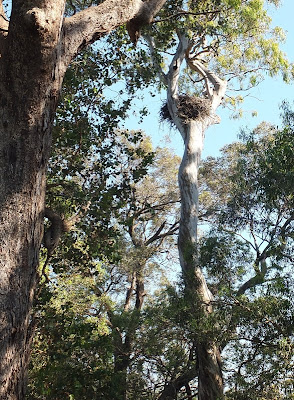 I’ll keep trying on that one I think.

I’ve never known a block of bush to be so full of Rufous Whistlers. They were calling all morning from all over the place. I’d estimate at least 4 pair in the vicinity. 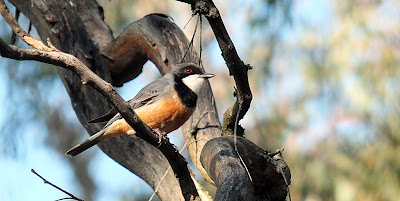 Unusually, I ticked a Pallid Cuckoo by sight before I heard it. I don’t recall hearing its call all morning. 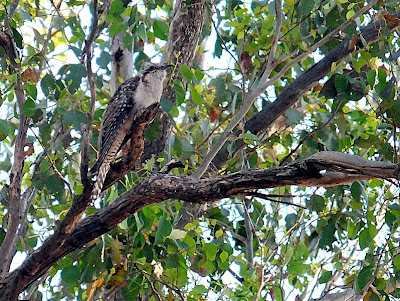 White-winged Trillers were busy too. I think I’ve only ever seen one or two individuals at a time in the past but this morning there was at least half a dozen birds chasing one another in the tree tops. 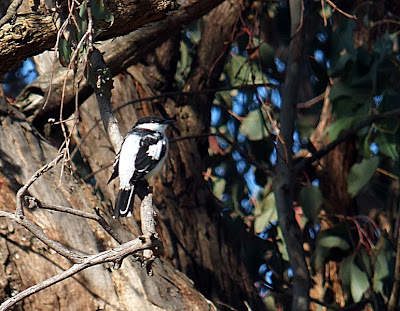 Back to the watering.
Regards,
Gouldiae.
Posted by Gouldiae at 10:27 PM No comments:

A Little Time Out (and about).

A couple of days ago, Pop took Nan to the railhead in Traralgon so Nan could ride the iron horse to the big smoke for her dose of granddaughter spoiling. Pop went on to the Morwell National Park for an hour or two. 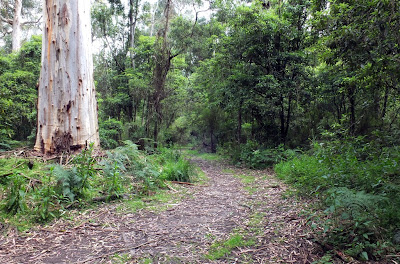 Last year I struggled to find a decent example of the Butterfly Orchid that grows in there. Currently there are plenty of small ones just starting but I did manage to find one well advanced with at least a couple of dozen flower heads. We are well endowed with terrestrial orchids around here, but this - I think - is our only epiphyte. 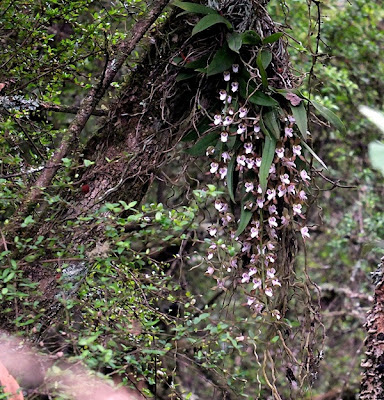 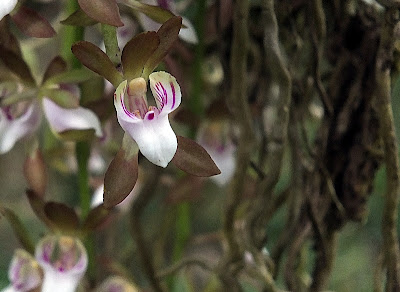 As I was struggling with the low light conditions and trying different camera settings, I became aware of a party of small birds that seemed to be checking me out. Dare I hope that it would be those Brown Gerygones? Are they still here? Although described in the literature as sedentary and common, they are just about on their southern limit around these parts so it is always great to come across them.

Bingo! And I think the population has expanded – they seemed to be everywhere. 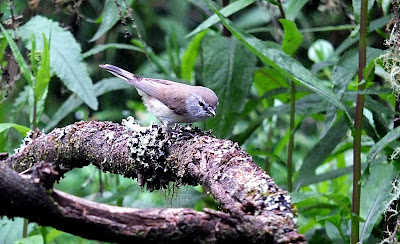 After chasing the ‘jerry-gones’ for a bit, time was slipping away and there was still a couple of fairways to cut before dark. On the way home a farmer at Seaton was carting in some of his hay bales and disturbing a huge mixed flock of sulphur-crested cockies, corellas and ravens. As he drove through them they would all take off, some landing again directly behind the tractor, others flying off to some distant lookout trees. 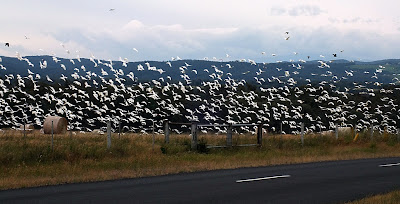 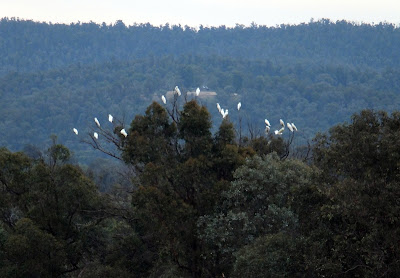 … back to that mower.

Regards,
Gouldiae.
Posted by Gouldiae at 7:44 AM 3 comments:

We have nearly a dozen surviving Minor Grass Trees in the bush between the 14th and 15th fairways. I say ‘surviving’ because quite a number have been ‘mown’ into submission by the boys on the roughs mowers. It is only after heaps of whingeing that they have stopped cutting so deep into the bush. Now if your ball goes in there, the saying is, “That’s where elephants go to die.” Fine by me!

Anyway, a few of the Minor Grass Trees have suddenly sent up their flower spikes and actually come in to bloom. We’ve had flower spikes before, but seldom any flowers. We’re having a great season. 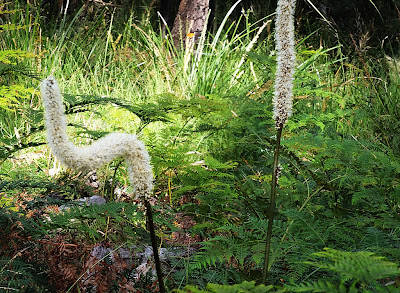 I ventured in with the camera today and took some shots. While doing so, the variety of visitors to the nectar factories was remarkable, including a number of Common Brown Butterflies that were shouldering each other away for a position. 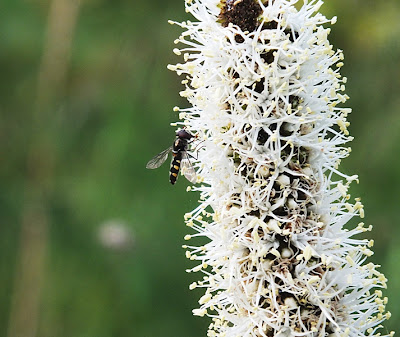 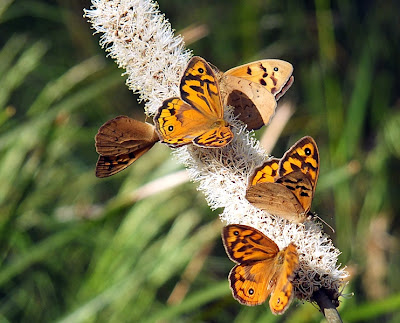 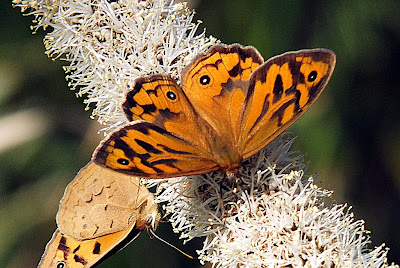 
G'day Blogworld,
A few postings back I was bemoanig the fact I'd not been able to see an Orioles nest on the golf course despite them visiting every year.

I have a small 'drink station' set up in a favourite patch of box bush behind the workshop. I check it from time to time when sharpening, adjusting, greasing, etc starts to get borinig. Yesterday happened to be a day I took the camera to 'work' and so I spent a casual half hour around the drink trough.

First in was a juvenile Olive-backed Oriole. 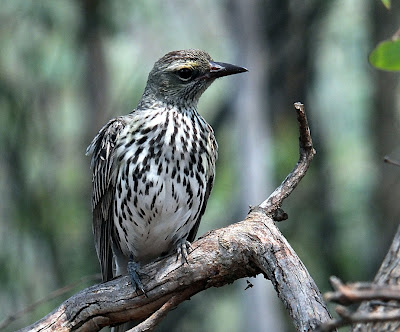 After a bit another Oriole started approaching cautiously but to my surprise it bypassed the watering point and headed straight for a nest - directly above me! 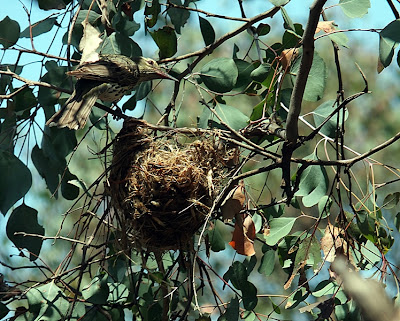 Didn't stay long - that's me and the bird. I had to get back under a machine and the bird just looked inside then flew off again. Nice to know it is there, I can keep an eye out for perhaps some more entertainment between sharpening. "What's that noise?" I hear you ask. That's the noise of grass growing!!!!