G’day,
The Rosy Hyacinth-orchids are still flowering around here. They can put on a show right through to May apparently. Their size and colour always catches my eye in the dull grey/green of the box-bush. Some can grow to a metre tall. 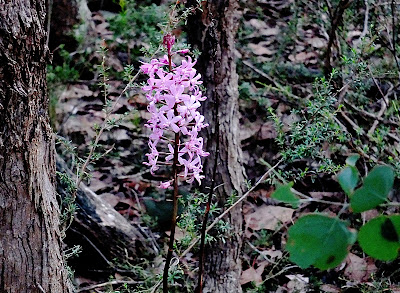 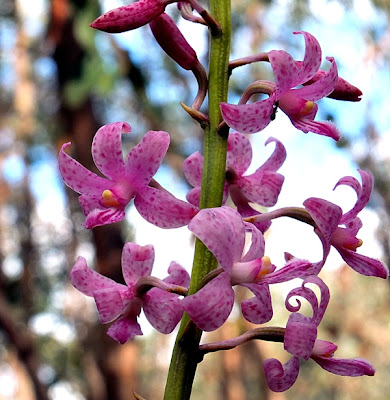 There were a couple of individual plants growing in the one locality and each leafless stem was shooting from very close to the trunk of a young box. I subsequently discovered that the hyacinth-orchid is an epiparasite – an organism that parasitizes other parasites. 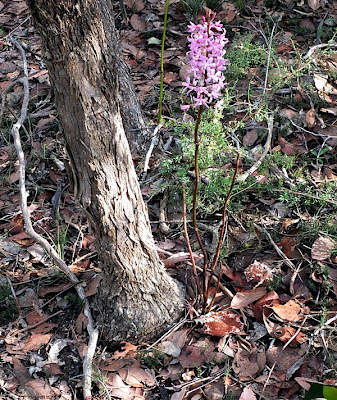 In this case apparently, there is a parasitic fungus on the roots of the tree that the orchid relies on for its own nutrition. And then of course there are probably some insect species that the orchid is host to as well. (You might just see a small invertebrate on one of the flowers in the second pic).

While I was groveling around on the ground getting some of these pictures, the resident Golden Whistler  quietly dropped in for a closer look too and of course he is possibly quite interested in the insects the orchid attracts! 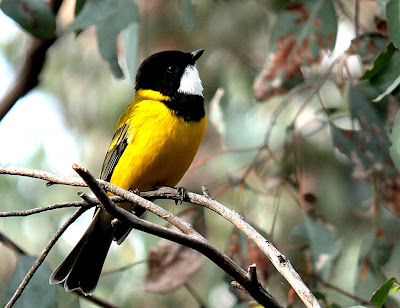 
G’day Readers,
There has been a couple of bowerbird bowers in the garden for several years now. I believe the Satin Bowerbird will often erect more than one bower in a favourite vicinity and use just one of them for attracting the female and the others for ‘practice’. The principal bower is tucked away under the shrubbery in probably the darkest corner of the garden – of course. 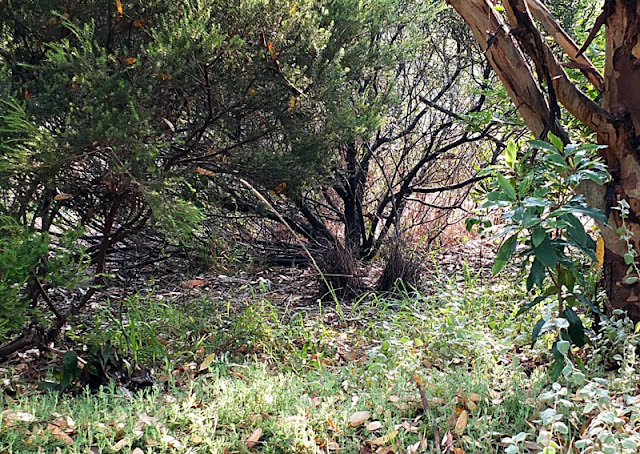 I haven’t noticed it being used for at least two seasons. Suddenly of late there has been considerable interest in refurbishing it. 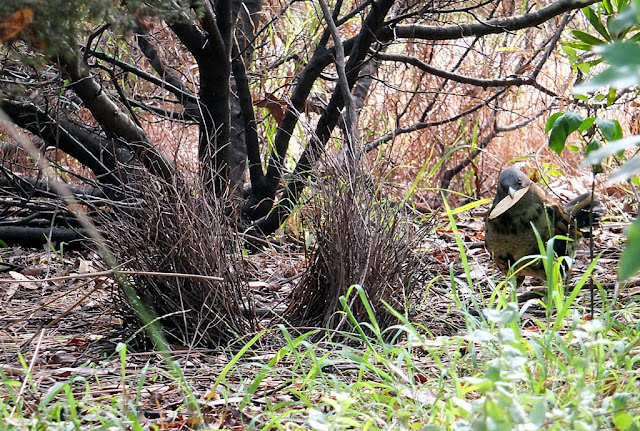 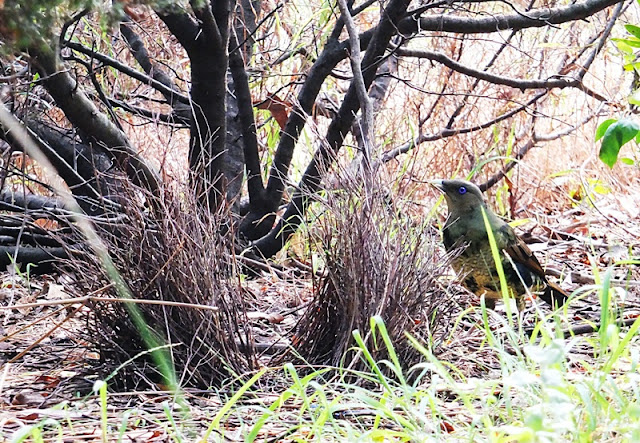 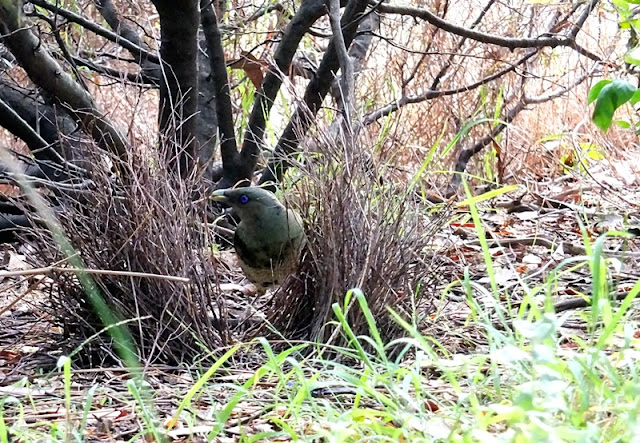 Obviously a young male is doing the work – it can take 6 or 7 years for young males to get the full adult satin blue plumage apparently. While he works away, the female(s) watch from a nearby perch and sometimes move down for a closer inspection of his workmanship. 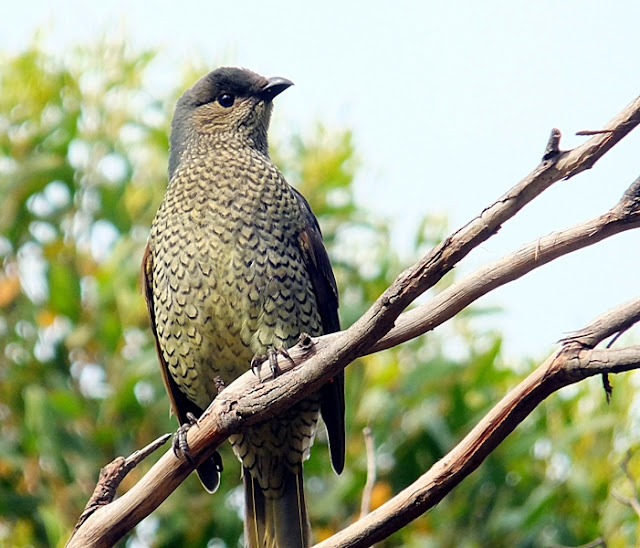 The whirring and wheezing that goes on while this is being done each morning, alerts me to what is taking place. If I sit still long enough they carry on regardless, just 5 metres away.
Regards,
Gouldiae.

Posted by Gouldiae at 8:12 AM No comments:


G’day,
I took the rake, (and the camera), into the bush beside some of the back fairways today. I have begun tidying up the ‘nature trails’ in preparation for the explosion of wildflowers later this year. I guess you’ve noted the hint of optimism?

As I was working away and between swatting the mosquitoes, I began to feel as though I was being watched. I looked around several times but saw nothing. Then I shouldered the rake to walk back to the previous intersection and there was Polly, the girl from next door. 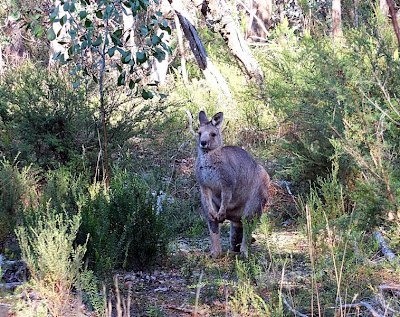 On the way out a flash of red caught my eye and I discovered this interesting flower. Any guesses? 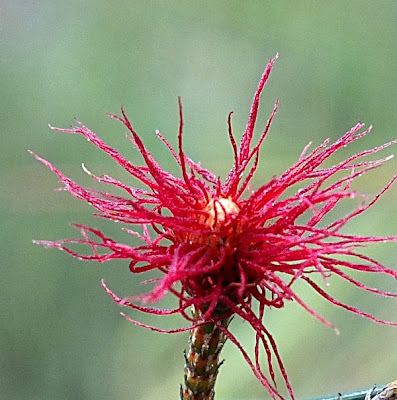 Full marks to those who guessed Casaurina, (littoralis I think). 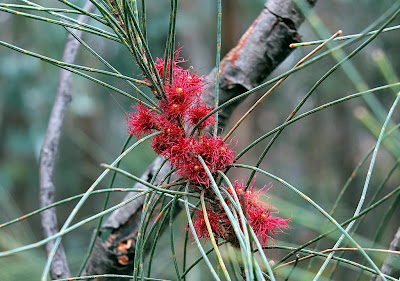 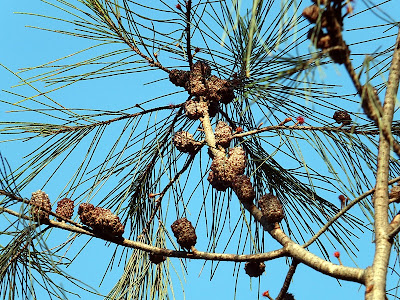 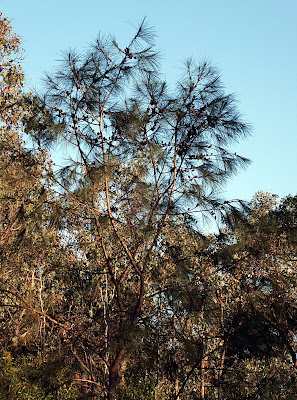 We have several of these scattered throughout the bush and they make a lovely contrast to all the box trees.

Even in our little patch of dry bush there is nearly always something going on to catch the eye.
Regards,
Gouldiae.
Posted by Gouldiae at 3:57 PM No comments:


G’day Readers,
The golf course next door has some small patches of native bush beside a few fairways. I constantly endeavour to discourage others from clearing, mowing or cutting firewood in these spots. It’s a bit of struggle – “It’s a golf course, not a wilderness” – but I’m slowly getting there, I think.
Yesterday the first Scarlet Robins for this winter appeared. Wonderful little birds and presumably in decline a bit, due mainly to loss of habitat. 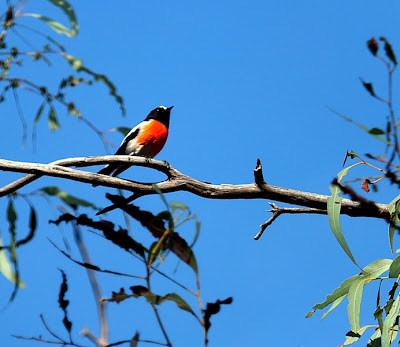 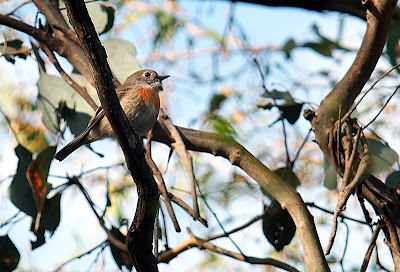 I’ve noticed the Mosquito Orchids are putting on their annual show at present and I came across some Tiny Greenhoods I’ve not seen here before, too. The Tiny’s are well named – hard to find and hard to photograph. 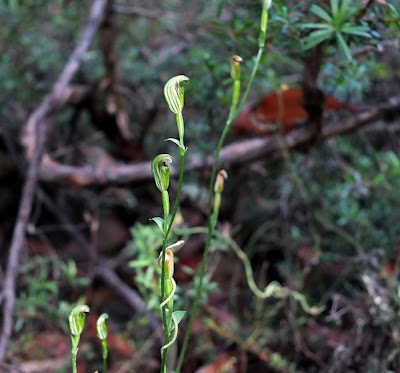 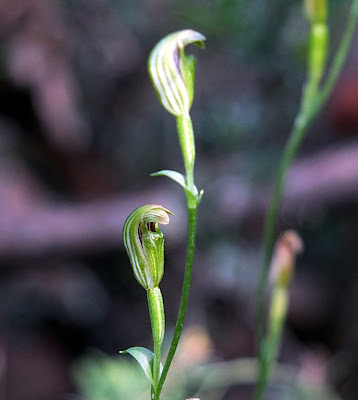 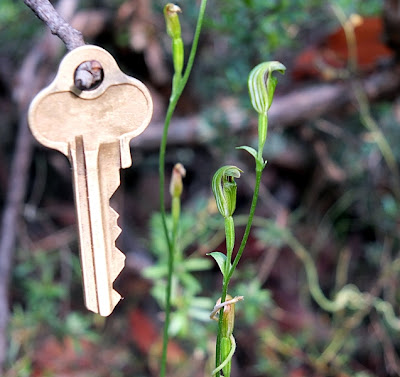 We’ll get the usual Trims, Noddings and Maroons showing later – already some leaves appearing. Gotta keep that bit of bush!
Regards,
Gouldiae.
Posted by Gouldiae at 7:26 AM No comments:


G’day All,
The annual golf tournament is over, the grass has stopped growing, time to get the camera out again.
I didn’t have to go far. A ‘rusty hinge bird’ was creaking away in one of the Bushy Yates in the garden. The culprit was a young Gang-gang who was being very persistent with his call for food. 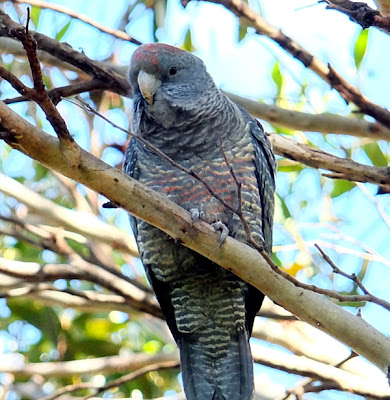 Mum was nearby chewing away at one of the very tough seed capsules. As soon as she had a full crop, she hopped over to the youngster and let him have a meal. 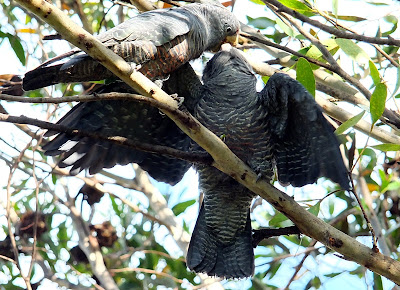 Meanwhile, dad was higher up just feeding himself. I didn’t notice if he also gave junior a mouthful. 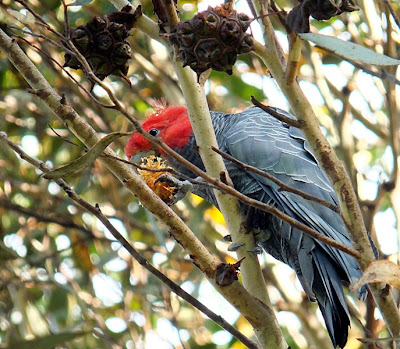 The Gang-gangs come down from the mountains each winter and spend several months on the lower country. For most of winter now, we will have small parties visiting selected trees in our garden and on the golf course. They can often be easily approached when feeding and their presence is nearly always indicated by their creaky growling often uttered in flight.
Very welcome visitors.
Regards,
Gouldiae.
Posted by Gouldiae at 8:27 AM 2 comments: