There's a Rail In The Garden!

G’day www People,
The number of sightings reported this season of birds we don’t normally see too many of, is a good indicator of how different the weather has been for the last several months. Farmers dams are full, lagoons are brimming, even golf courses are green, yey!
I have quite regularly spotted White-necked and Nankeen Night Herons, Great Egrets and Buff-banded Rails around the dams and waterholes in the district but I was chuffed to have a rail run across the driveway at home here a few days back. We have a small garden dam in the front yard that catches water tank overflow and grey water from the house, and the Buff-banded Rail dashed from a garden on one side of the driveway into the dam paddock. 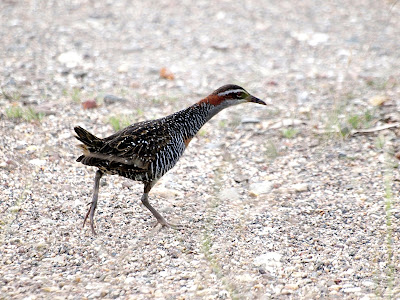 Over the ensuing days I ‘monitored’ things for a bit and discovered there was a pair. I’d seen a rail or two on the golf course next door and assumed ‘my’ pair were occasional visitors from the course.
The garden birds seemed to be present too consistently to be visitors and then I noticed they were getting grubs and insects from the mulch in the garden and returning to the dam paddock with beaks full. Could it be? Some more intensive monitoring was required. 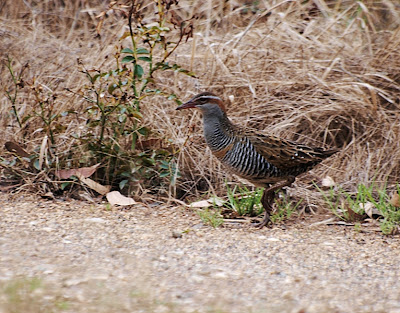 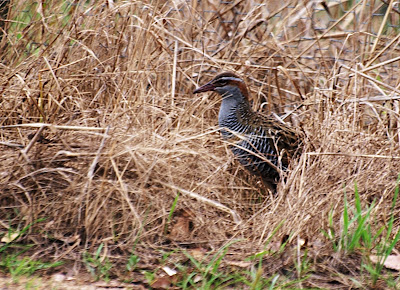 Eventually I caught a glimpse of two small black balls of fluff dash across the driveway with dad ahead and mum behind. Too quick for my camera work – I have lots of close up shots of the gravel in my driveway if anyone would like to see?
Late one evening, I sprung the family a little further away from the dam than usual. Instead of dashing across, they ‘went to ground’ in the garden and it became a matter of waiting for them to break cover. As time passed, the light began to fade dramatically and I was struggling to get an image on the camera without using the flash. This was the best I could do and I’ve decided to leave them alone for a bit now. 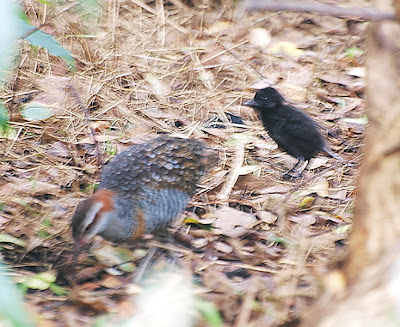 Nice to have them so close to home, I’ve been entertained for hours without having to drive anywhere.
Regards,
Gouldiae.
Posted by Gouldiae at 7:30 AM 5 comments:

G’day Birdos,
A small band of committed birdwatchers braved the bad weather forecast and assembled in Sale on Sunday morning.
We were heading for Giffard and had just got over the Latrobe River on the Longford causeway when a large mob of water birds caught our eye. No doubt about the difference to the season this year. There were Egrets, (by the 100s), Spoonbills, Herons, Pelicans, Swans, various ducks and waterhens in great profusion. Whistling Kites and Swamp Harriers were cruising above looking for some prey. 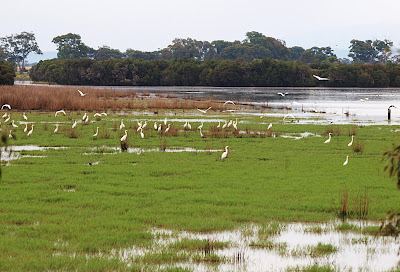 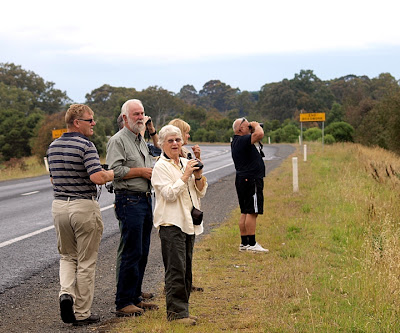 Despite the roaring of the passing traffic, many of whom probably wondered what we were looking at, we stood and absorbed the scene for some time.
At Giffard we entered a property that was earmarked by Basslink as an offset requirement for their easement from McGauran’s Beach to Loy Yang. This large block of deteriorating farmland has been re-vegetated and is recovering brilliantly. All the usual whistlers, wrens, thornbills and honeyeaters, etc have moved in. The approaching weather front even heralded our first Needle-tail Swifts for 2012.
After a cuppa we headed for Jack Smith Lake and did a quick survey of the spit near the car park before scurrying back into our cars to dodge the rain. 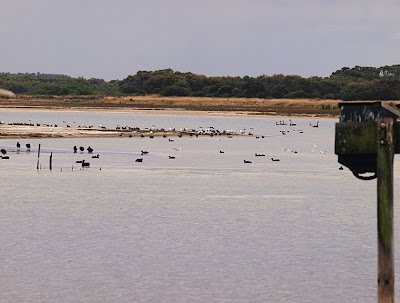 When the front had passed it was on with the coats, off with the ladder, and across the creek. White-fronted Chats, Red-capped Dotterels, Skylarks and a small flock of Blue-winged Parrots were ticked as we did the walk along the fenceline on the western bank of the lake.
Several of us were probably 15 minutes from the cars when the next rain front arrived and there is no cover what-so-ever. We sloshed our way back to the others sitting warm and dry in the vehicles, so we told them of the Eclectus Parrots, Red-bellied Pittas that we saw!
Oddly, at this point we decided to head for home. Our car deviated, (which it frequently does when I’m driving), to McGaurans Beach – a small flock of ENORMOUS Pacific Gulls – and to the Swing Bridge at Sale that was just closing from its weekly opening event. 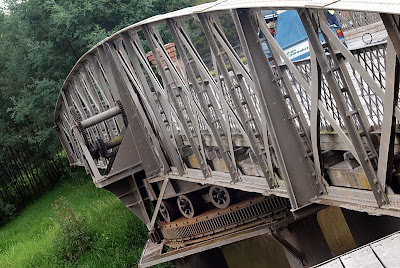 As I drove up the driveway at home, a family of Buff-banded Rails dashed across the track in front of me – more of that later.
Regards,
Gouldiae.
Posted by Gouldiae at 7:48 AM 2 comments: