G'day Readers,
I'm still finding it difficult to find the time to get out and about and then to blog something. Last Sunday I did catch Glen at a weaker moment and convinced her to journey south for an hour or two and see the display of flowers currently on show in the Won Wron State Forest. She was not disappointed.

Blues, reds, yellows, purples... were assaulting the eyes at almost every stop. I was familiar with the territory from past years and also had Duncan and Mitch show me some special locations just a week or so earlier.

Gouldiae Has Been Tardy!

G’day All,
Apologies for the lack of entries of late. A couple of small health issues, busy times on the golf course – including mower breakdowns, heaps to do around home – including trying to fix a leak in our concrete tank, the only water tank we have, trying to prepare a little for an upcoming camp – Gluepot again, has all meant not a lot of energy seems to be left over for blogging.
A short summary of a couple of little things I’ve noticed …
A pair of Yellow-tailed Black Cockatoos were ripping into a small wattle on the roadside. I don't like the chances of a few of the wattle's branches surviving the grub attack. 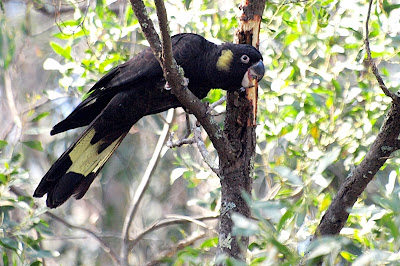 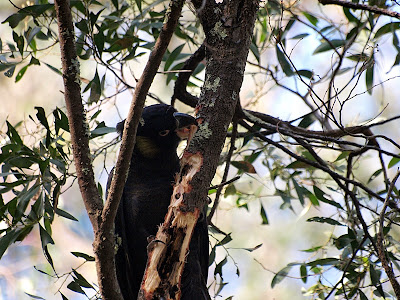 Glen and I did find time for half a day to visit Jo's beautiful 'Open Garden' in Metung. What a lot of hard work? The result is stunning! 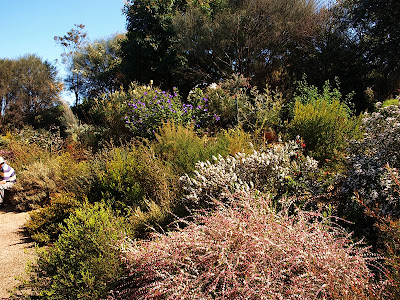 When watering one night, I caught some glimpses of a pair of young Ringtail Possums frolicking on a low branch. By the time I returned with the camera, all I got was mum poking her head of a nearby parrot nest box. She may have called the youngsters indoors, as I couldn't spot them anywhere in the tree. 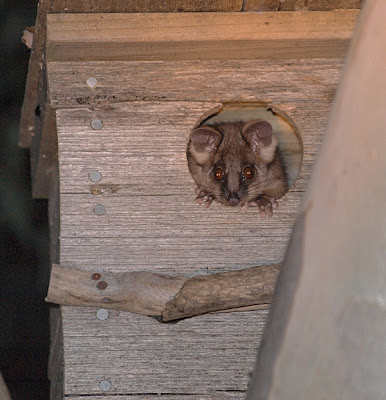 There are heaps of different wildflowers on the golf course this season. Here's one example of the Wax-lip Orchid that exists in several colonies among the red box. 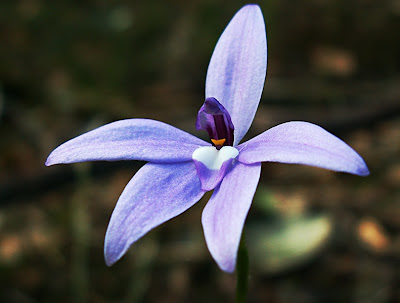 G’day Birdwatchers,
A small but hardy flock of birdos braved the cold winds and showers - some with hail – yesterday, and explored the Flooding Creek track at the Sale Common. Just before we left the meeting point at Lake Guthridge, Jane pointed out the young Swan that seems to have imprinted to a Goose. 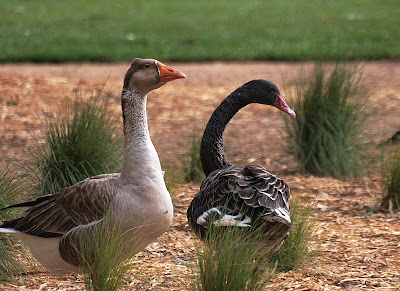 There wasn’t much activity at Lake Guyatt as the water was too high, covering all the mud flats. This situation probably suits many of the recreational walkers/joggers/cyclists who seem to think the controlled water level in this lake should be this high at all times, having scant regard or understanding for the needs of waders and other species that enjoy the food source provided by the periodic exposure of the mud flats. We headed around to the Common.
With a little more protection from the winds here, we began seeing some of the resident bush birds – wrens, fantails, honeyeaters, thrushes, thornbills, etc. In the reed beds adjacent to the track there were reed warblers and Little Grassbirds constantly calling. Part of the team spotted a Koala and Ross and I were entertained for some minutes watching a very handsome Imperial White butterfly dash about but refusing to land low enough for a decent photograph. 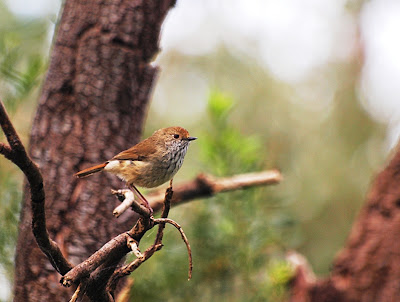 Next it was a hot cuppa to warm the insides at least, then into the cars and around past the swing bridge to the gate at the Heart Morass beside the Latrobe. (Anyone from the trustees that run this place reading this – surely it’s time to put in some form of access for pedestrians at this point?)
We were confronted with a stunning view in the distance. First there was water in the place – we have had a great start to spring in Gippsland. On the water were thousands of birds. After discussing it for a bit, we decided that there were several flocks/carpets of Eurasian Coots alone that must have totaled MANY thousand! Hundreds and hundreds of Swans, many with cygnets, ducks of several varieties and to complete the scene, circling Swamp Harriers and Whistling Kites that would occasionally dive down into the masses and split them asunder.
The ground was too soft to approach for a closer picture, but the image below is just one SMALL fraction of what we could see in front of us. And, this was just on the edge of the very first part of a very extensive wetland. Who knows what lay beyond? 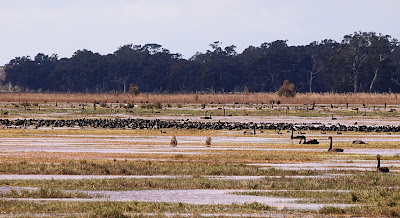 We stood there and oohed and aahed for a while, and then I noticed we went quiet as I suspect we were each in awe of the grandeur that Mother Nature sometimes throws up to us.
On the way back out, Jane and Shane capped the day off very nicely for us by showing us a Tawny Frogmouth on its nest high up in an old Red Gum. Great finish to a cold but rewarding day for a small bunch of stalwarts! 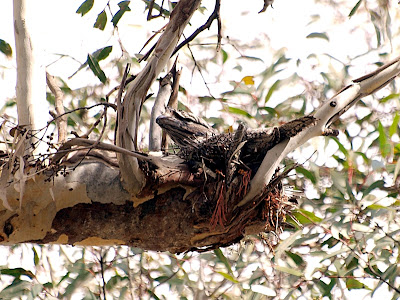 Regards,
Gouldiae.
Posted by Gouldiae at 6:52 AM No comments:

And Then There Was Five!

G’day,
Today I had occasion to spend most of the day in Traralgon while a job was being done on the ute. You are probably not surprised that I spent a fair bit of the day with the camera at the beautiful Traralgon Res Wetlands on the outskirts of town. This piece of formerly neglected swampland has been turned into a wonderful wetland habitat that is a real bird magnet for quite a range of species.
My first encounter was with a charming Black Duck family, mum and six ducklings, on one of the lower ponds. They were a little wary of me at first, but I managed to sit quietly for a while and they became relatively accustomed to me and I snuck a few family portraits … 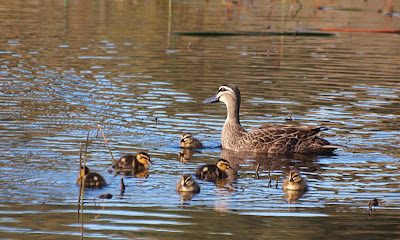 As I went to move on they swam off a little into a nearby bed of reeds. Suddenly there was a commotion and a Purple Swamphen shot out … 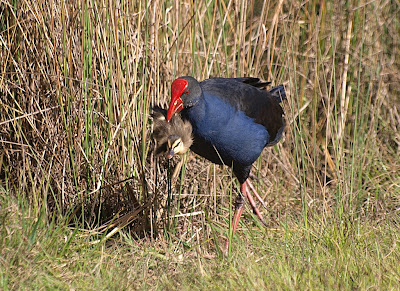 I felt a bit responsible, as it was my moving away that caused mum to take the family into cover. The duckling was well and truly alive as I chased the swamphen for a bit, but it wasn’t letting go. Eventually it flew to the opposite bank and along with a couple of mates settled down to enjoy a meal of fresh duckling as I slunk off.
Cutting through the bush up to the main pond, a small group of Yellow-tailed Black Cockatoos were surprised to see me and flew off to a nearby tree and a Willie Wagtail flew in to scold me for entering it's territory. 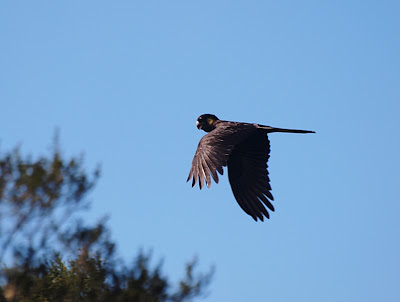 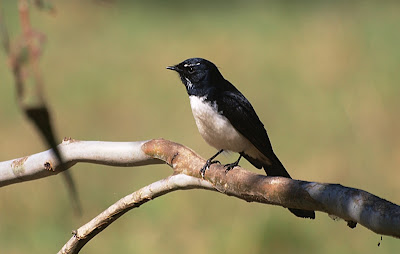 The main pond was alive with coots, moorhens, swamphens Black Ducks, Chestnut Teal, a Swan or two and a few ferals. One of the first reed warblers for the season was dashing about the reed beds being oddly very quiet. 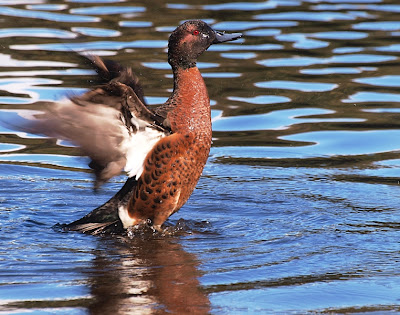 I apologize if you are one of the many who check in both here and at Duncan’s Ben Cruachan Blog to see what has been going on in this little corner of Gippsland. DF recently blogged the Duck Orchids and today he took me to see exactly where he found them. I know there are some followers of this blog that just look in occasionally to see what I’ve been up to and where I’ve been. This entry is for you, as you may have missed DF’s blog about these strange looking orchids. 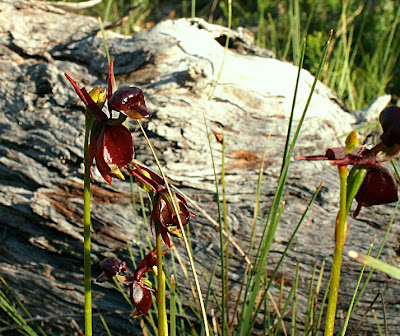 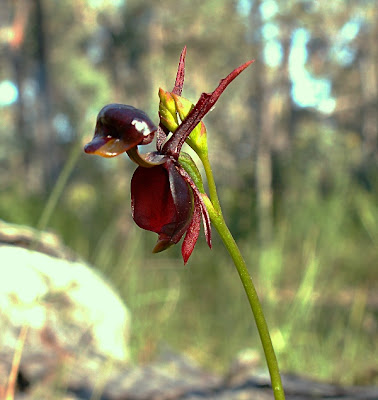 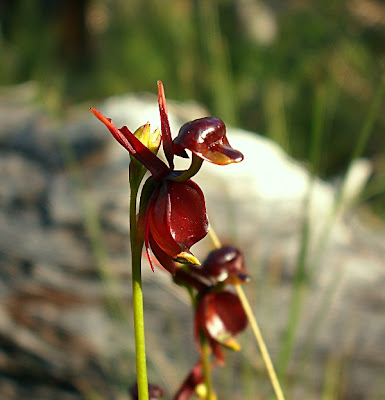 Weird aren’t they?
According to Jeanes and Backhouse, (Wild Orchids of Victoria, Australia), the Large Duck Orchid is a member of the Caleana genus and though widespread is relatively uncommon. They are capable of growing in a variety of habitats. These were in a pretty dry, (normally), box-ironbark-stringybark piece of bush just north of home. Haven’t seen them on the golf course, but you never know!
There were plenty of ‘wash your mouth out Glenis’, (but that’s another story), Nodding Blue Lilies in flower too. Some were very strongly blue, others were much paler. 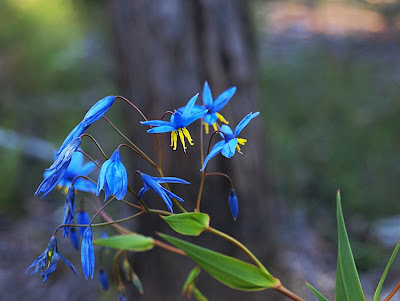