A Conversation With An Old Golfer!

G'day Readers,
I was photographing on the course yesterday and an elderly golfer meandered over. Our conversation went something like ...

Old golfer: "G'day young fella. Watcha got up in that bush?"

Old golfer: "Is that them grey cockies with the red head?"

Me: "That's right. Beautiful aren't they?"

Old Golfer, (genuinely as far as I could tell): "We used to eat them!" 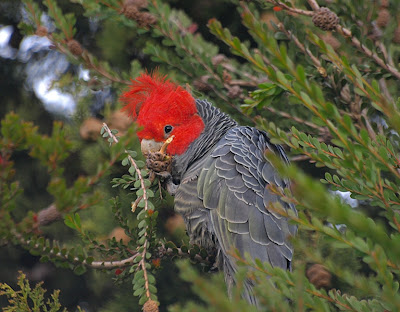 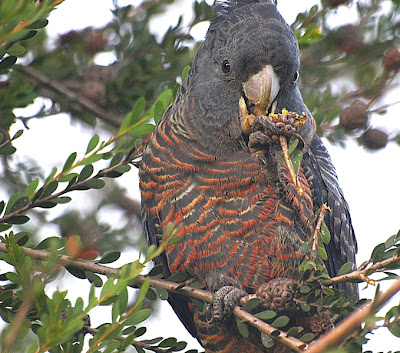 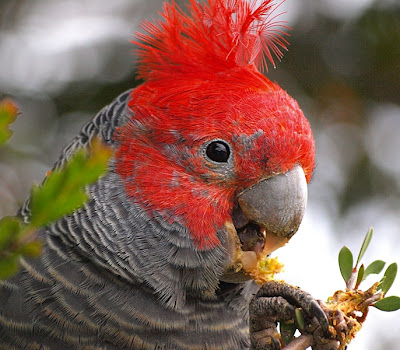 The conversation didn't quite end there, but I found it hard to be polite after that.

Looking Down The Barrel

G'day,
I snuck away for an hour or so this afternoon and checked out the two local flora and fauna reserves. Bit of a scheme going around these parts at present, trying to document any sightings of Swift Parrots and Regent Honeyeaters.

The two reserves are looking the best they ever have for some time, reflecting the rainfall we have been having for a while now. At the Heyfield Flora Reserve, there was water flowing through a small gully where I've not seen even a small puddle before!  There was a little activity in the tree tops, but not a lot of blossom on the Ironbarks or Box just yet.

I did have some fun with Mr ubiquitous (Grey Fantail), however...

No parrots or honeteaters out of the ordinary.

G'dayReaders,
I was lucky enough to enjoy a beaut day out with the Sale Field Naturalists on Sunday. DF and I took them for a wander through part of the Swallow Lagoon Conservation Reserve - a favourite little patch of bush of ours. For a change, Duncan and I spent our time with our eyes to the ground instead of to the tree tops.

We have had some nice rain lately and it is very evident that the ground level plants have appreciated it. Several times through the day as I got down to photograph an orchid etc, I could feel the ground give a little under the pressure of my knees and elbows - the place hasn't been like that in a while!

Any day spent out in the bush is great in my book, but even more enjoyable when it is with other like minded souls. Thanks Joan and co.

G’day Readers,
As my ‘Recently Sighted’ list in the right hand side of this blog indicates, I have been lucky enough to catch some glimpses of the elusive Painted Button Quail in some patches of bush on the golf course.
Having once seen one I set out to get an image. Some weeks ago I started staking out the patch of bush where I first saw one of these enigmatic little beauties. Enigmatic because in some areas little is known about the species. Some references state they are sedentary others say nomadic but their movements are unrecorded. Certainly in this area the number of sightings seems to be on the rise at present. Have they suddenly bred up, or have the migrated in?
I set off one morning and there was a scuttle of movement almost straight away. I hadn’t even switched on the camera. I managed to predict where the bird would break cover and didn’t want to take my eyes from the location long enough to CHECK THE CAMERA SETTINGS. The bird appeared almost exactly where I thought it might and I fired away – click……click……click, but it should have been a much more rapid– click..click..click..click..click! Yep, full matrix metering and f16 aperture etc. I’d last used the camera for some landscapes. In the meantime the bird was well gone. Here’s what I got … 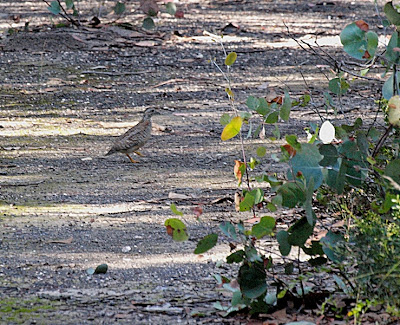 Enough at least to see it was a PBQ.
Yesterday was another fruitless day in the search, at first that is. I spent an hour using my standard approach of creeping from tree to tree and standing still while scanning the leaf litter, (camera settings all double checked) – “Go away Golden Whistler, Scarlet Robin, Spotted Pardalote, you’re not on the menu”. No luck however and there were some fairways to be mown. I headed back to the machinery shed, checked and started the mower, backed out and just began heading down the bush track to the nearby 7th fairway and THREE quail ran across in front of the machine.
I left the mower idling in the middle of the track as it seems being so close to the shed they were quite accustomed to loud machinery noises and presumably the occasional terse word. Again I couldn’t get a shot off as they ran from cover to cover, so it was back to cutting fairways. I was pleased to note the increased number and that they were so near at hand.
Later in the day I had to cut the greens. Of course I checked all around the shed before starting but there was no sign. I had to go to the first green down the same short length of bush track where I’d seen the birds in the morning. No sign, so I got the mind back into mowing gear and set off.
After cutting nearly half the greens and completely forgetting about birds for the moment, I was just finishing a cut on the 18th and a small brown bird flew low and rapidly in front of the mower, chased by a battalion of Noisy Miners. It went behind a tree or two but its trajectory would have meant a crash landing somewhere near the 7th green. I lifted the reels of the greens mower and headed over to see a squad of Noisy Miners harassing the billyo out of a Painted Button Quail.
I shooed the miners away, (why do they do that?), and the poor quail sat traumatized almost in the middle of the green. Of course the camera was back home by now. The miners were staying away so I put the mower into top gear and headed home -  slowly. Greens mowers are designed to travel slowly across greens and only marginally faster between greens. After grabbing the camera and jumping on the motor bike for a quicker return trip, I headed back to the 7th hoping the bird was still there. As the green came in to view I could see the bird still squatting in the middle and not a miner to be seen.
I clicked away for a bit … 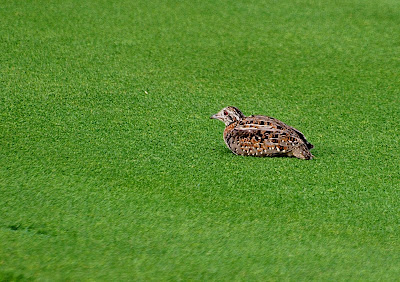 Satisfied I’d got a shot or two it was time to see the bird off to safer surrounds. I moved a little closer and it ran to the edge of the green. As soon as it moved, the miners who must have been watching from the nearby trees started to chase it again… 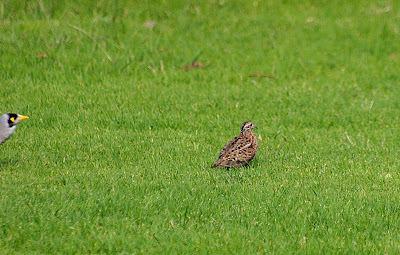 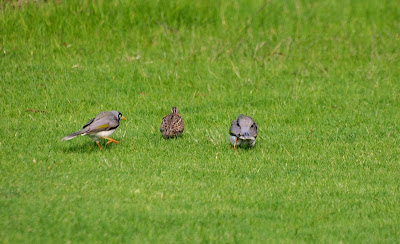 This time it found some longer grass to squat in and remained there only partly camouflaged, but enough to bamboozle the miners who eventually gave up and flew away.
I stood quite close and wondered if it was injured … 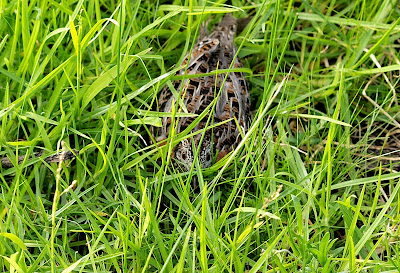 A few seconds later it must have decided it was safe enough to make a dash for the nearest bit of bush cover and off it flew to the scrub on the boundary of the course. Quite an episode for the little bird, I hope it lives to tell the tale!
Regards,
Gouldiae.
Posted by Gouldiae at 7:53 AM 3 comments:


G’day Birdwatchers,
We were only a small group that braved the long freeway trip, inclement weather and Mother’s Day to have a look at the Royal Botanic Gardens Cranbourne.
The gardens were established in 1970. They consist of 360 hectares of woodlands, grasslands, wetlands and a beautiful display garden of native plants. Urbanization surrounds the place, but like many such areas, it acts as a magnetic like refuge for wildlife. Kangaroos, Wallabies, Echidnas, Bandicoots, snakes and birds abound. The infrastructure – tracks, signs, shelters, etc – is impressive.
Two of us headed for the bush area and got rather wet on our 5km hike. Given the weather the birds were understandably quiet but we managed some views of a few favourites – Golden Whistler, Eastern Yellow Robin, Blue Wren, Cuckoo-shrike, Australasian Grebe. It was way too wet to head into the scrub to chase down any sightings. Various heaths were in flower and there were patches of orchid leaves visible from the track. 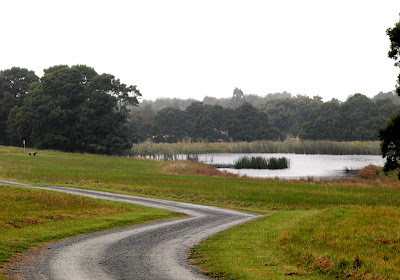 After 2 or 3 hours and becoming drenched we caught up with the others at the Australian Garden and headed for a sheltered lunch spot. Despite the Mother’s Day bit the place was not too crowded, thanks to the weather. After our chilly lunch Ian and the ladies headed for home and I decided I’d check out the display gardens after the glowing report from the girls.
Few words, just a few photos … 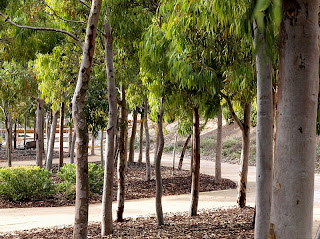 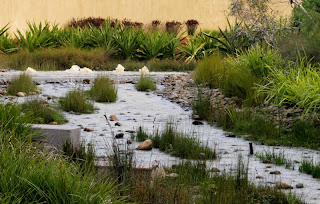 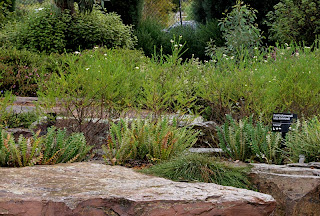 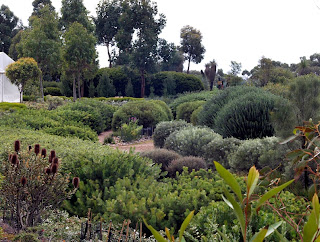 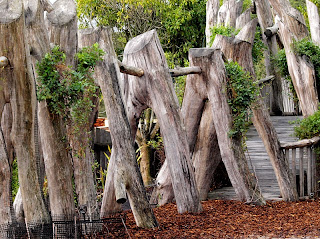 The Big and the Beautiful

G'day All,
I luckily had the camera with me on the mower yesterday, just as I spotted a Wedge-tailed Eagle soaring over the fairway I was mowing. I pulled over to the side under some trees and managed a shot or two without getting off the machine. 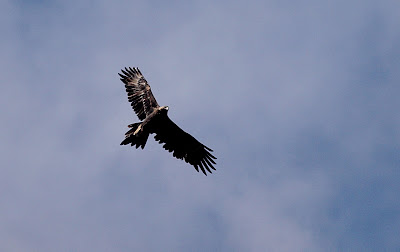 As soon as I got off the mower and broke my cover the bird began to rapidly gain altitude, seemingly without a flap of its wings, and very quickly became just a speck in the sky.
A little later in the day I was just near Sale and came across a family of Flame Robins on a fence line. Using the car for cover this time, they allowed me one or two quick captures before dashing off out of range. 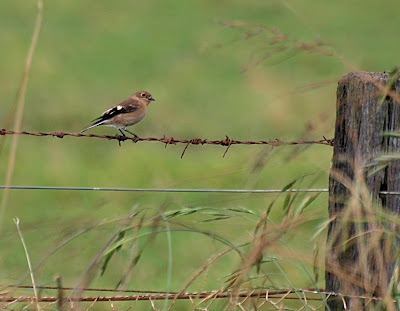 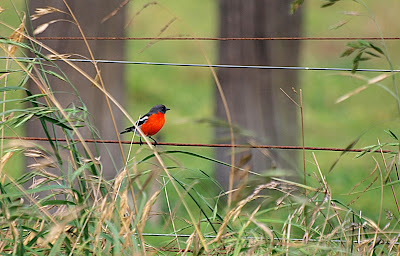 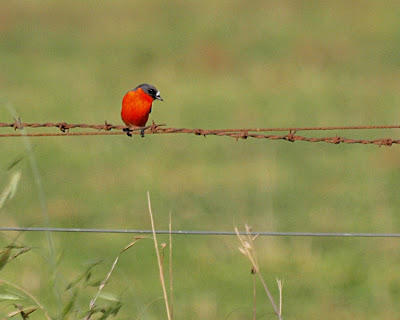 I find the flame a delightful little bird. They are a little more understated than the regular scarlets we get here. They love the open country where they spend their day perching on wires and low branches and suddenly pouncing down to some tasty morsel spied on the ground.
Regards,
Gouldiae.
Posted by Gouldiae at 7:27 AM 5 comments: