G'day Nature Lovers,
I walked out of the edge of the bush at the Botanical Gardens - Cranbourne yesterday and came face to face with a Red-necked, (I think), Wallaby. It sat still for a shot or two then headed back into cover. 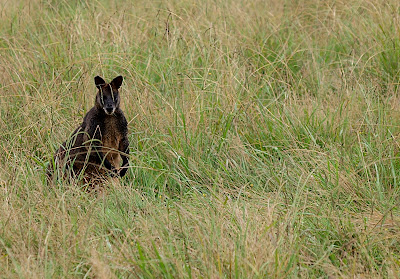 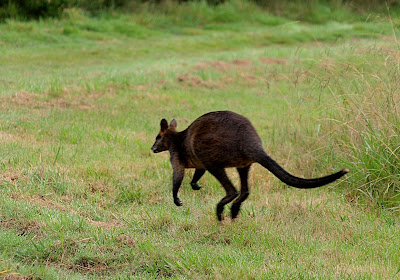 Just to the side of the macropod was a sign ... I managed to spend a very enjoyable couple of hours wandering about 5% of the tracks and trails of the bush section in the gardens. In that short time I scored 20+ bird species and saw some wonderful examples of heathland, grassland, wetland and of course bush. 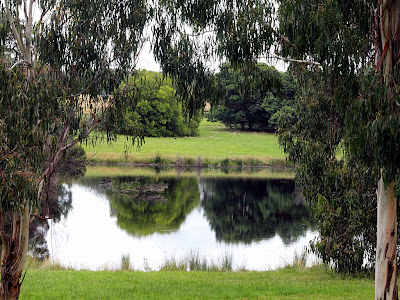 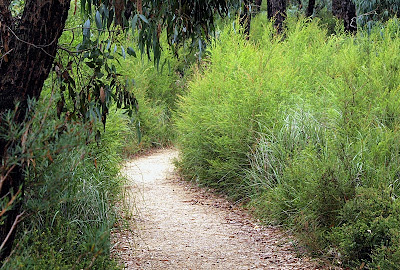 The very overcast conditions made photography a bit tricky but if the birds were close enough I could manage an acceptable image occasionally. 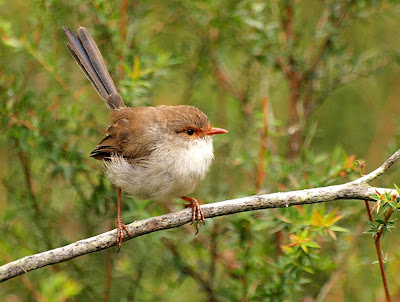 I was desperate to linger longer but the grandchildren in Frankston were on the agenda so I had to get a move on and catch up with the three minipods! I'm gunna just have to return one day - soon.


Regards,
Gouldiae.
Posted by Gouldiae at 8:09 AM 2 comments:

G'day All,
In order to not embarrass more sensitive readers I have avoided the Australian vernacular for the heading of today's post.

A small group of bird people tried to camp for a few nights at the beautiful Fernholme Tarra Valley Tourist Park. The weather forecast was full of foreboding, but the trip had been planned for some time so a few intrepid birdos assembled on Monday morning at the Yarram Bakery.

After swapping introductions we headed north up the beautiful Tarra Valley under thickening cloud. Already I was having flashbacks of wet camping trips in times past. Hastily we pitched tents and parked campervans and headed to the banks of the stream before either darkness or rain, (or both as it turned out), descended. 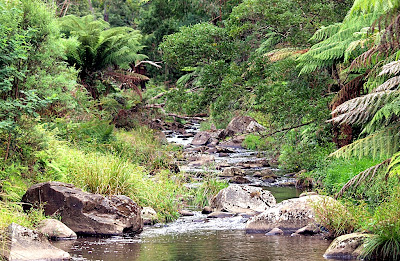 The gardens around the house and the banks of the very nearby stream were alive with a variety of birds - Yellow-faced, Lewin's and New Holland Honeyeaters, Eastern Spinebills, White-browed Scrubwrens, Blue Wrens, Silvereyes, Brown Thornbills and Red-browed Finches were all ticked quickly. Yellow-tailed Black Cockatoos screeched overhead as they flocked in to roost in their overnight tree. A Lyrebird called from the dense scrub on the river bank. (I couldn't hear any fairway mowers at all). 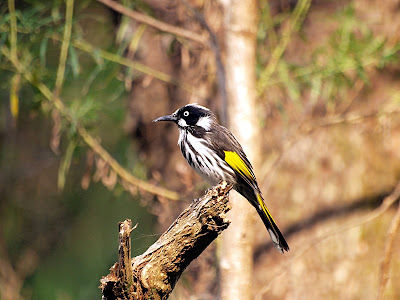 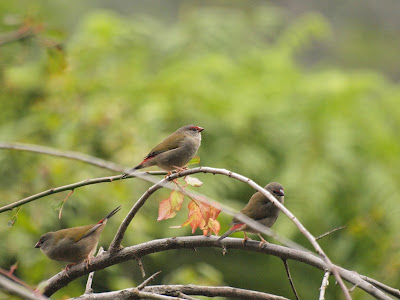 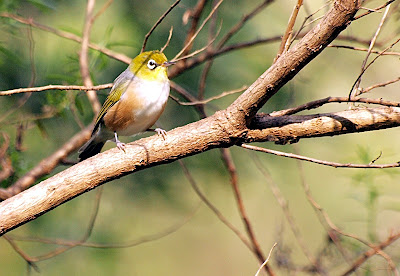 We managed a few shots before the failing light forced us back to camp and then into the barbecue shed for dinner. A nice log fire helped the atmosphere no end and a touring NSW couple joined us for some bird/camping tales.

About 10pm the rain commenced. About 10am it was still pouring! Decision time. We opted to pull up stumps and try again another day. Sometimes that's the way it goes.

As we left and said our goodbyes, Tony and Sabine from NSW headed for Wilson's Promontory. They were doing the Lighthouse walk. Wonder how they got on?


Regards,
Gouldiae.
PS: 4 days later and the tent etc still hasn't dried out. Hasn't been like this in March for a long time around here.
Posted by Gouldiae at 7:45 AM 3 comments:

G'day,
Between mowing episodes today, I had a quick trip to Sale. As often as I can, this usually involves at least a cursory look in at the common or the lake. 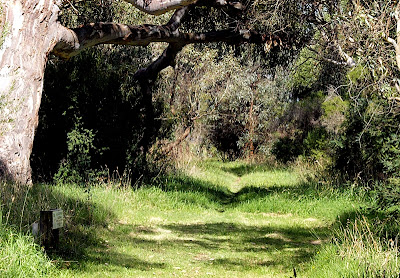 The common today was very pleasant and in spite of only having half an hour to explore, it was most enjoyable. There was a little bit of action on the water - Pied Cormorants, Swans, Swamp Hens ... - but the surrounding bush was alive with Blue Wrens, Scrub Wrens, Red-brows, Brown Thorns ... I didn't really have the time to stalk the birds much, but I came across a Robber Fly. 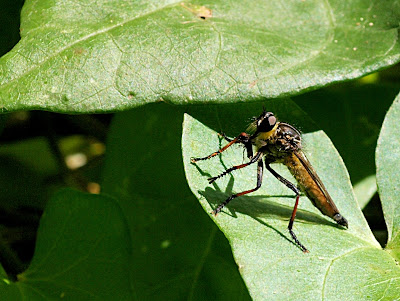 Despite having the wrong lens in the camera I gave chase for a bit until it landed right on the limiting distance. After checking the first couple of pics on the screen I could see it had a victim in its grasp. It waited for a short time, probably while it delivered its coup de gras of toxin, and then an enzyme to dissolve the internal body parts before sucking them out. What a lovely day! 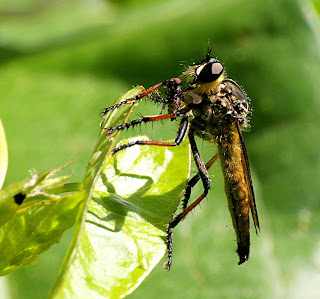 G’day Bird persons,
We had a beaut day at Canni Creek on Sunday. Perhaps the starting time was a bit early, or the holiday weekend was an issue, as only 6 of us showed up.
After a morning coffee at Bruthen we headed up the road to the race/golf course location and stepping out of the vehicles we could hear Bell Miners right away and nearly had to duck to avoid the Swallows and Martins that were circling in big numbers.
Nancy pinged a Yellow-tufted Honeyeater almost immediately and we were away.
Our list included Oriole, Cuckoo-shrike, White-naped Honeyeater, Dusky Woodswallow, Jacky Winter, Shining Bronze-cuckoo, Red-browed Finch, Spotted Pardalote, Stubble Quail, Scarlet Robin and Rufous Whistler. I think Nancy recorded 32 species all up.
Apart from the birds, there was a nice display of the little Parsons Bands Orchid scattered throughout the scrub.
The weather was a bit dull and turned showery just after lunch. We tried to persevere for a while longer, trying to keep cameras and binoculars dry, but it got the better of us and we headed home.
Regards,
Gouldiae.
Posted by Gouldiae at 9:30 PM 2 comments:


G’day Readers,
‘Tis raining nicely here in central Gippsland and we had some wonderful steady precipitation nearly right through the night too. Result – some time to knock up a blog. Radar says that it might not last much longer, so we’ll have to jump on a mower again soon.
I have been noticing Leaden Flycatchers a little more often this season. Not sure if it is coincidental or just that I’m getting a bit better at picking them up. There is always some hesitation in picking the difference between the Leaden and the Satin. Most of my sightings have been in our open woodland country, which the field guides tend to suggest is preferred, more by the Leaden where the Satin likes more heavily timbered habitat.
The very excellent website conducted by Graeme Chapman, explains a very obvious way to distinguish between the males and he has some great photographs to demonstrate the feature – the colour demarcation line on the chest bends upwards on the Leaden and downwards on the Satin. Now I only have to remember which is which when I next see one in the field!
The females are another story. Graeme Chapman says, “Females are another matter. Leaden females have a plain leaden-grey crown whereas Satins have a bluish sheen….  Some Satin females are a bit darker on the breast but this is a variable character. Immatures are virtually indistinguishable.”
Anyway, I was in a little bit of bush the other day and a female dropped in for a look at me. 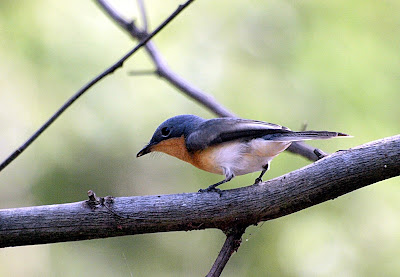 Because of the habitat, at first glance I plumped for a Leaden. I realized I wasn’t too far from the location of where I’d recently caught up with a male, so re-checking the photos, I was able to pick the ever so slightly up-turning demarcation chest line of a Leaden. 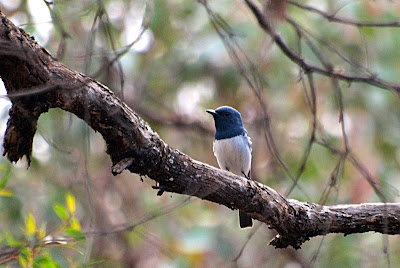 Whatever! Nice to have them or at least to be seeing them in increased number this year.
Regards,
Gouldiae.
Posted by Gouldiae at 8:04 AM 2 comments: