That Little Bird With the Strange Name

G’day Blog Readers,
Some weeks back I received a summons – for jury service. After checking the list of reasons to be excused and not finding ‘mowing and watering’, ‘bird surveying’ or ‘born in the early war years’ anywhere to be seen, I had to make myself available. Consequently I’ve been trying to get ahead a bit with the golf course stuff for the last week, and bingo, I drew a blank at the Sale Law Courts. Wow, a free day, what to do?
Clydebank Morass is nestled between the Avon River and the ‘salt lake’ Lake Wellington. 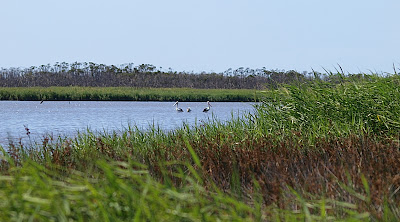 Standing in ankle deep water amongst the head high cumbungi, I could hear the mournful call of the Little Grassbird, and the incessant, strident, ‘pillek-pillek-pillek’, (appropriate), of the Golden-headed Cisticola. 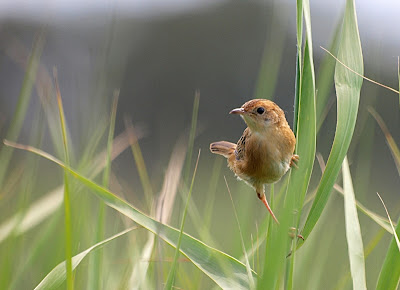 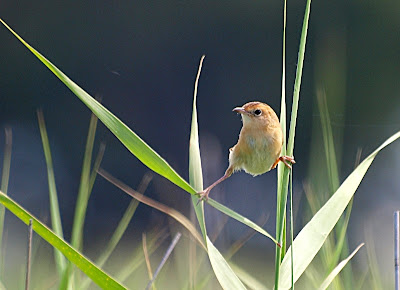 Eventually they began checking me out from the tops of the reeds. 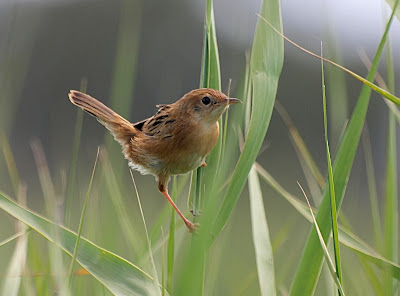 After having fun in there for some time, I carefully retraced my path out, (great tiger country), and tried to pin down four Wedge-tailed Eagles I’d noticed soaring overhead, but they were on to me very early and wouldn’t let me get near their perching tree for a photo.
Just half a kilometer down the road at Marlay Point, the piles were occupied by Silver Gulls, Crested Terns and a lone Caspian Tern. They all seemed less concerned by the noisy jet skiers than I was! Forecast is for a bit of a heat wave, so it was time to head home and put out some water.
Regards,
Gouldiae.
Posted by Gouldiae at 7:09 AM 4 comments:

G’day All,
Still alive here in Gippsland, just struggling a bit to get out and find something to blog about. That changed yesterday morning.
There I was, just about to head out onto the course and fire up the fairway mower, again, and the phone rang. It was Martin from Greening Australia / Gippsland. “If you’re not doing much right now, I’m standing in a piece of bush just down the road and the birds are hot.”
I was there in ten minutes. It was close and the camera and bins are always in the ute ready!
The first cab off the rank was a quail that Martin had spied and when I showed him the quail page in the field guide he immediately picked out the Painted Button Quail. Bit scarce in these parts thinks I, but eventually we managed to spring a pair and get some brief views – tick Painted Button Quail but too quick for a picture.
There was small colony of very active Dusky Woodswallows soaring just above the top of the grass snaring their breakfast on the wing.
In some open areas under the trees, the Yellow-rumped Thornbills and Diamond Firetail Finches were finding items to dine upon also.
Scanning the fenceline through the binoculars at one stage, I spotted a little group of Varied Sittellas spiraling down the fence posts probing inside the cracks for an insect. Unfortunately they were working the fence posts away from me and were too distant for a picture. Fun to see them doing the fence posts though.
The beautiful call of the Rufous Whistler was ever present as we meandered on through the trees for a bit while Martin continued with his census of the plant species. Then we heard the ‘zhirrp’ call of a Flycatcher and eventually pinned down the source to a Leaden – wonderful.
Just at the finish, as Martin was on the phone – well, he was in his office after all – I managed to capture a shot of the white wings of a White-winged Chough that you only ever see when they are in flight.
Just love phone calls like that – thanks MP.
Regards,
Gouldiae.
Posted by Gouldiae at 7:37 AM 4 comments:

G’day,
Last Sunday, after a morning coffee in the Yarragon Tea Rooms, we explored some ‘new turf’ at the Tarago Reservoir at Neerim South. We weren’t exactly sure where to go, but John found us a small overgrown track beside the river, below the dam.
The light was dull and there was plenty of cover for the birds, but we found a few – Blue Wrens, White-browed Scrubwrens, Grey Fantails, Golden Whistlers, Eastern Whipbirds, Lewin’s and Yellow-faced Honeyeaters, Yellow-tailed Black Cockatoos among them.
The highlight though was some good but brief views of a Rufous Fantail, a ‘firster’ for some in the group. This little beauty is a bit uncommon for us Central Gippslanders and it’s been some time since we’ve come across one. We weren’t able to score a good picture, but it reminded me that somewhere in my files I had some old shots taken of one at the nest.
Thanks all. It was a long way to travel, but that rufous made it worthwhile in my book.
Regards,
Gouldiae.
Posted by Gouldiae at 7:06 AM 2 comments:

G’day,
There’s quite a few trees on the golf course that often catch my eye as I cruise by on the bike or one of the mowers. When I was watering earlier this evening, a flowering gum, (?), near the first tee was in profusion with blossom. 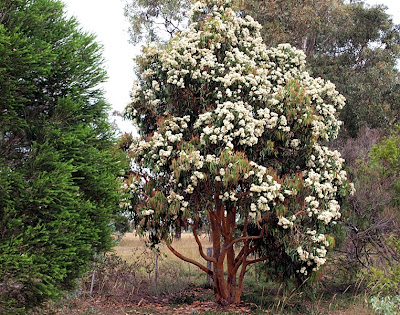 I’ve always enjoyed the rust coloured trunk and branches of this particular specimen – often stunning in the low evening light. 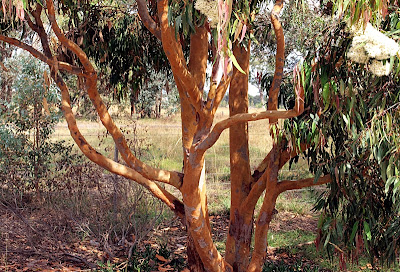 Closer inspection revealed a plethora of insects in attendance. Hover Flies, Flower Wasps, various Ants, Bees, Butterflies and Beetles and quite a number of others for which I don’t even know the family name.  The stand out was the beautiful Fiddler Beetle, so named for the violin/‘fiddle’ pattern on the elytra or wing covers. 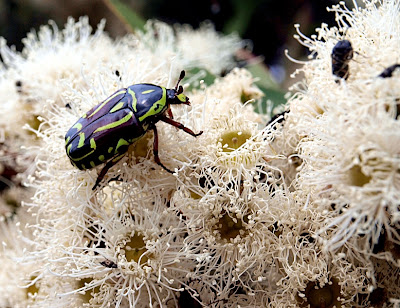 Some had green markings on an almost all black background, while a few others had yellow markings on brown. 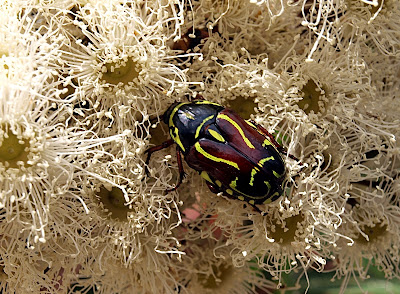 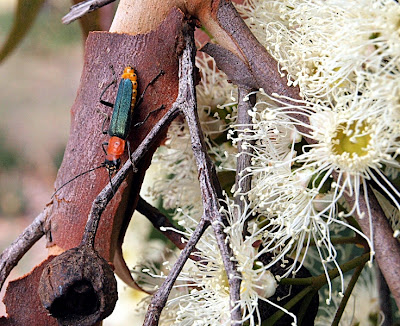 All in all, a very colourful interlude to the watering exercise!
Regards,
Gouldiae.
Posted by Gouldiae at 10:23 PM 2 comments:

G'day readers,
The post I did the other day on Pacific Black Ducks seemed a little unfair on another beautiful duck seen a lot on our wetlands and dams in these parts – the Chestnut Teal. 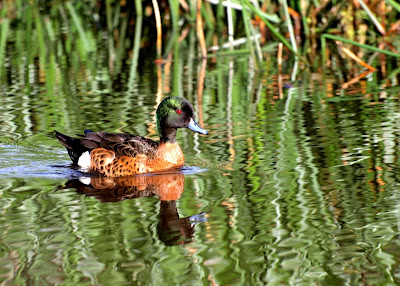 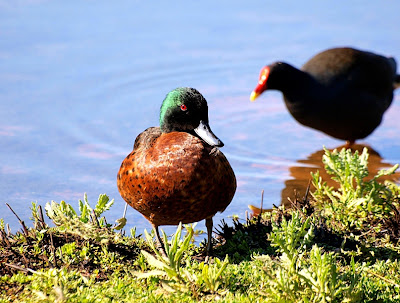 The iridescent bottle green head of the male, contrasts beautifully with the chestnut brown chest. 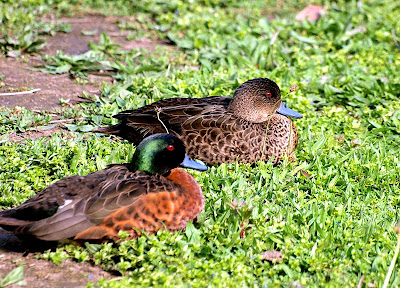 Although not as widespread as the Black Duck, I reckon the Chestnut Teal make good indicators of the health of a wetland, as their numbers seem to vary considerably according to the seasonal conditions, and while Black Ducks are sometimes described as sedentary or perhaps locally nomadic, the Chestnut Teal populations tend to be more dispersive.
While helping Barry and Mike do some weeding and planting at the wetlands yesterday, a family of Chestnut Teal was sunbathing on a log on the opposite bank of the lagoon. 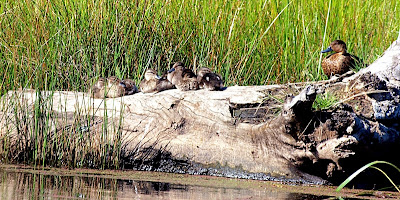