G’day Blog Followers,
The Wonga Pigeon is a bird that I hear more often than see. It spends most of the day on the ground or perching quietly in relatively dense bushland gullies. I hear its monotonous cooing or the clatter of its wings as it dashes off to a distant perch where it keeps a close eye on any stalker, seldom allowing close viewing.
I believe that in some places, the Wonga has become accustomed to humans and will use garden feeders, visit parkland, etc. I have only ever encountered the bird in quiet bushland, generally early in the mornings.
Recently I was camping overnight in the Colquhoun Forest near Lakes Entrance and on an early morning walk, in the distance, came across a small party of Wongas feeding on the track. Unusually, I spotted them before they saw me, so I grabbed the advantage and squatted down in some nearby shrubbery while they worked their way toward me. 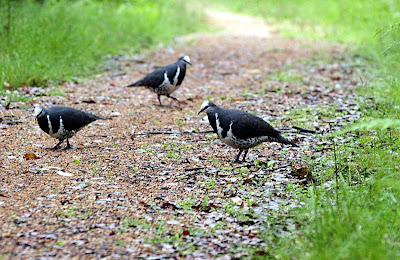 As they drew closer, they became aware of my minimal movement and probably the clicking of the camera, but they must have decided I was pretty harmless. The light was very low and I even managed to get off a couple of shots using the flash before they took wing. 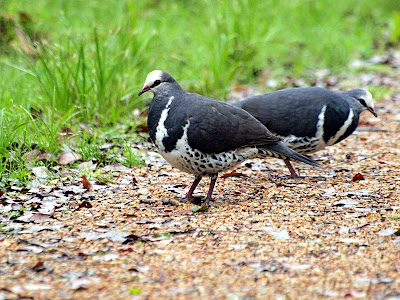 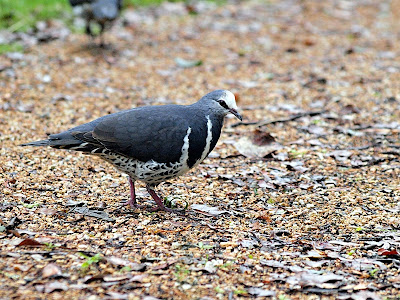 I’d probably interrupted their breakfast and it was time to get back to the tent for my own, so I let them be.
Regards,
Gouldiae.
Posted by Gouldiae at 6:27 AM