G'day Followers,
Ron and I have just spent the last three freezing cold days helping with a Bug Blitz exercise at the Heart Morass, just south of Sale.

Over the 3 days, groups of schoolchildren attended and took part in various activities associated with the restoration of this once degraded area. They planted trees, measured water quality, collected bugs and insects and built 3 wonderful large art installations.

Ron and I took them for a 'discovery/look and listen' walk along Flooding Creek Track. We tried to show our groups how to find various invertebrates, look for hollows, nests, etc and then lead them to discovering the connections between some of the animals, birds and their environment - simple really!

Here's a link to the local ABC Radio site where you can see Ron and I at work and hear our dulcet tones.

And here, you can read some more about the Heart Morass Restoration Project.

G'day,
I took Glen to the train station in Traralgon on Tuesday. She was due for her regular 'grand-kid fix' in Melbourne. After our goodbyes, I headed for Crinigan Reserve in nearby Morwell where it's always a bit wetter than around home.

I lucked out on finding any of the scarce and vulnerable Swamp Greenhoods that grow there - probably a bit early yet. Plenty of others though, including several nice colonies of Slaty, (I think), Helmet-orchids, plus Tall and Nodding Greenhoods. Often all three were within a 'belly roll' of one another. (Orchid photographers will understand).

Why the title? There was even a Pea in flower, so good ol' Spring can only be just around the corner!

G'day Blog Readers,This is a late entry from the Heyfield Birdwatchers day back on the 8th of August. Our final 'garden' to visit was John and Marg's at Coongulla.

The star of the show, (in my opinion anyway, and I think some will dispute this - more details later), were the resident Whistling Kites, one devouring a recent catck from nearby Lake Glenmaggie. 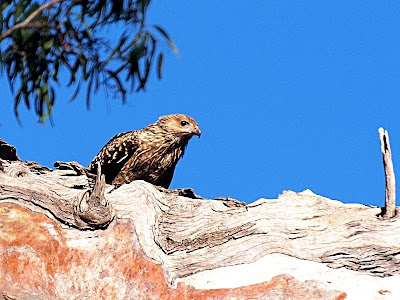 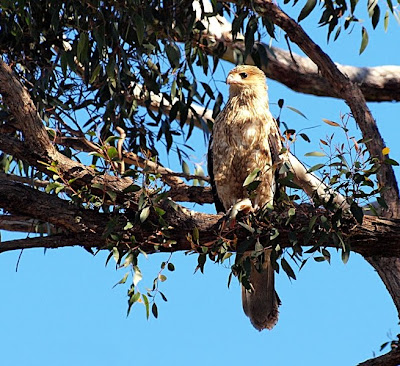 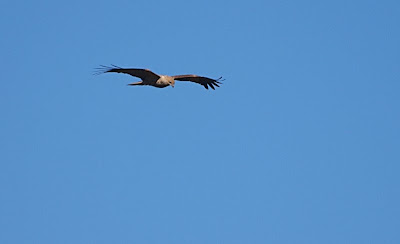 On our walk through the bush there was plenty of action from the usual suspects. 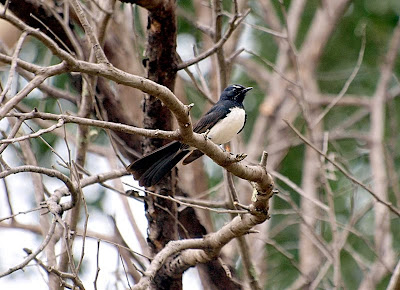 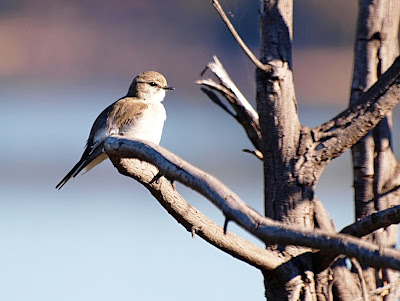 As I intimated at the beginning, there might have been another 'bird' that drew close attention. 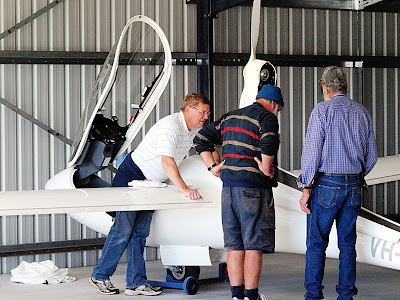 G'day,
Just down the road from home there is a small, neglected, seldom visited, (just my kind of habitat), flora reserve. On my walk through a day or so ago, I came across a small group of little Thornbills bathing in a tiny puddle. I'm not too certain of my 'buff rumps', but I think that's what they were.


Despite them not letting me get too close for a better shot, I spent a delightful 10 or 15 minutes watching them partake of their ablutions.

I continued on my walk and came across a group of damaged trees. 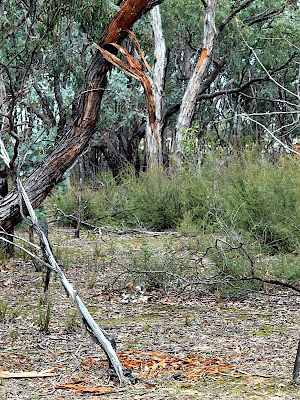 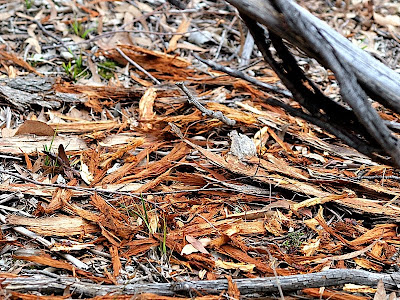 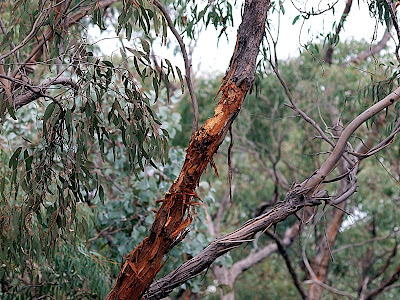 Closer inspection revealed that whatever had created the mess was probably after some form of wood boring larvae, most likely the Witchetty Grub. 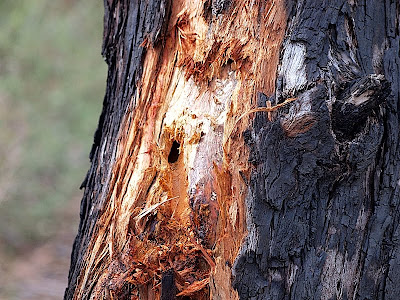 It almost certainly had to be Yellow-tailed Black Cockatoos. I'd seen quite large flocks of them previously in the reserve. Stunning birds that can do stunning damage. 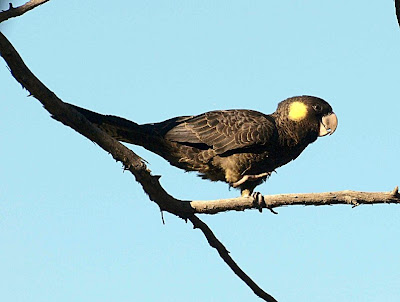 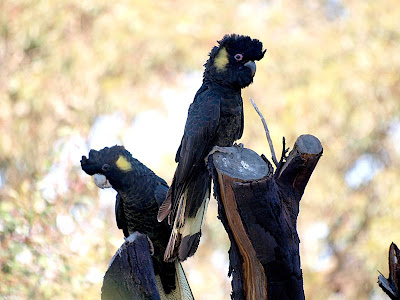 The Yellow-tailed Black Cockatoo occupies a range from southern Queensland, south and west to about Adelaide, taking in the coastal plains and adjacent ranges. Apparently there exists two races, and the birds from Queensland south to about here - Gippsland - will take seeds and grubs, etc, while the birds in western Victoria, Tasmania and South Australia have only a seed diet. Can anyone confirm this?

G'day Readers,
The recent Heyfield Birdwatchers day took us into several private gardens. As I mentioned in my report of the day, the birds at Mike and Dinny's property on the edge of the Ironbark forest were an eye opener. By sticking to native and largely idigenous plants in the garden, Mike and Dinny have attracted a stunning variety and number of birds to their location.

Honeyeaters were prolific. You could almost call the place 'New Holland Central', it was so popular with that species in particular.


Apart from those three above, Brown-headed and Yellow-faced Honeyeaters and Red Wattlebirds were present too.

Diamond Firetail and Red-browed Finches plus Yellow-rumped Thornbills were hopping about on the ground in good number.

Another small bush bird that likes to call Mike and Dinny's place home, virtually literally, is the Striated Pardalote. The following series of shots is of a pair collecting nesting material and lining their hollow log that is strung up under the back eave of the house.

Posted by Gouldiae at 3:32 PM No comments:

G'day All,
Barry's place right on the edge of town is the result of one man's determination to make a difference to his environment. What was once pretty much a bare paddock is now a haven for a large variety of birds, frogs and mammals.

Barry has concentrated on planting indigenous species as far as possible, including the rather scarce Golden Grevillea, (Grevillea chrysophaea). 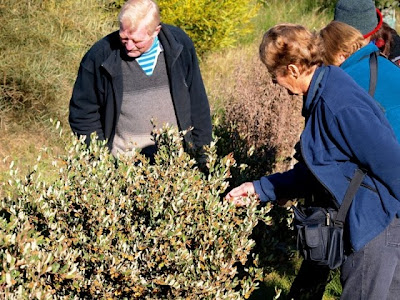 Every one of the many hundreds of trees and shrubs has its own water dripper! Bird central.


Great spot Barry, thanks for the visit.

Regards,
Gouldiae.
Posted by Gouldiae at 7:10 AM No comments:

G'day Birdos,
Yesterday was one out of the box - magnificent weather, beautiful gardens and 50 species! We did an 'open gardens' day, visiting 4 nearby properties and learning about the efforts made by the owners to attract native birds to the area.

At Peter and Glen's, we saw a variety of nest box installations and learned that several species will sometimes make use of the one nest box. A nest box erected for a target species doesn't always work. A huge box with a large opening designed for a Brushtail Possum was occupied for some time by a tiny Owlet Nightjar.

Barry and Margot's place was a revelation. Right on the edge of town, Barry has planted hundreds of trees and shrubs, most of which had their own dripper water supply from his man made dam/wetlands. The ducks, grebes, Newholland Honeyeaters, Eastern Spinebills, various Thornbills, Wrens etc that we encountered were a testament to the success of his work.

Mike and Dinny's place is a couple of kilometres from the centre of town and is on the edge of a piece of  Ironbark forest. The Box and Ironbark woodlands have largely dissapeared from Gippsland and the piece of Crown Land and the nearby Glenmaggie Flora Reserve are two small remnants in our area. (It was good to note that at all three of these properties so far, indigenous species planting regimes were still being conducted).

We were knocked over by Dinny's species list and the birds we saw, (several nesting), included Spotted and Striated Pardalotes, (at one time they were beside one another collecting nesting material from the branch of a Stringybark), White-naped and Brown-headed Honeyeaters, Wrens, Scrubwrens, Red-brows and the beautiful, scarce, yet here they were in good number and almost tame, Diamond Firetail Finches.

Our final visit was to an old favourite, John and Marg's Northpoint property at nearby Coongulla. After our lunch in a stunning garden setting, J&M took us for a stroll along the clifftop beside the lake, (Glenmaggie). Scarlet Robins, White-plumed Honeyeaters, Jacky Winters etc were added to the list along with the ubiquitous, (I wish), Diamond Firetails. The prize sighting here however was J&M's resident Whistling Kites devouring a recent catch of Redfin from the lake.

I think that we will all remember this outing for some time. I have several images in my head that I'm certain will stay for a long while. Thanks to all involved - just brilliant!


Regards,
Gouldiae.
PS: No pictures just yet. I need a bit of time to work on them - filled my card just after lunch - and will post a few over the next few days.
Posted by Gouldiae at 6:56 AM 1 comment:

G'day Bloggers,
Everyone probably has a 'Bellbird Corner' near them. There are several around here. Duncan has one close by that keeps him occupied and entertained. The one I sometimes visit is about 20km north of home on the Licola Rd. Yesterday I went up and just sat quietly in the gully for a time.

It was in the middle of a dull, cold day and the birds were quiet for a while. Eventually they began to appear - Eastern Yellow Robin, Eastern Spinebill, Brown Thornbill, Yellow-tufted Honeyeater, Grey Fantail, Grey Shrike-thrush, Blue Wren, Kookaburra, King Parrot, ... were all ticked in a short time.

Regards,
Gouldiae
Posted by Gouldiae at 6:58 AM 2 comments:

G'day Readers,
Glen and I have been keeping our eyes peeled for the first of the winter Greenhoods to appear on the golf course and at last they are here. 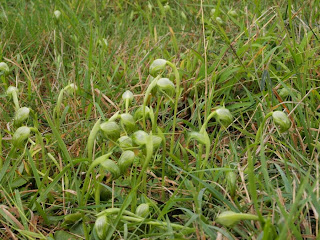 Earlier this year we had a promising start to Autumn/Winter, with something like an 'autumn break' of past times. Since then it has been cold and dry, dry, dry! We were beginning to despair for the appearance of the winter orchids. Suddenly Glen found this small colony of Nodding Greenhoods between a couple of the fairways. 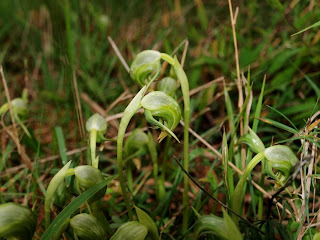 Now we are hopeful that some Trims and Maroons might suddenly appear - if we can discorage the 'rough's mower' from pruning them too early!