G'day All,
I had to go to Sale yesterday and as is often my pattern, I had lunch with some friends.

Along with Purple Swamphens, Moorhens, Coots etc, all were great company.

Regards,
Gouldiae.
Posted by Gouldiae at 6:39 AM 3 comments:

We are definitely having our coldest winter for some years around these parts. I don't remember so many frosty mornings in one season for quite awhile. Yesterday was another one - the 'greens' were white ... 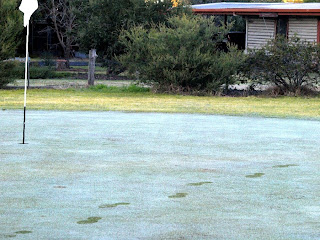 As usual though, we always get a nice day after a frosty start ... 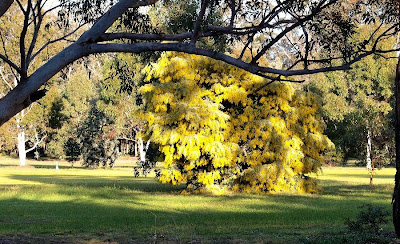 Many of the birds seem to enjoy warming up for a bit in the early sunshine. Others get stuck straight in to the business of the day ... 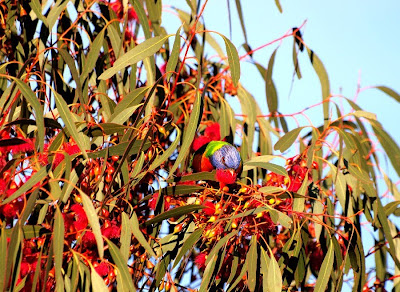 We're all hoping that something like the winters of old might mean a return to something like a normal spring, which might mean some rain. The Central Gippsland, or at least Heyfield, rain shadow was in full effect on the weekend. The weather reporter on the telly was heard to say that all districts had good rain - it barely registered in our gauge.

G'day Birdos,
A small group of us headed for the Latrobe Valley yesterday. The forecast was for a terrible day, windy and wet. What did we get? Fine and sunny all day, and no wind until late in the afternoon - brilliant! 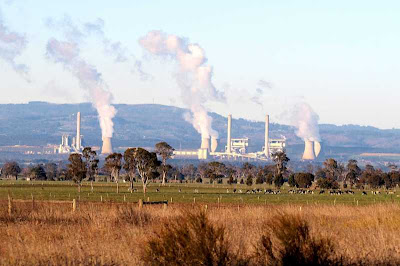 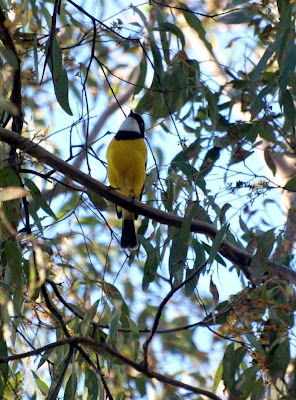 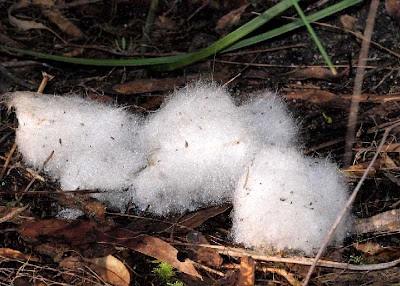 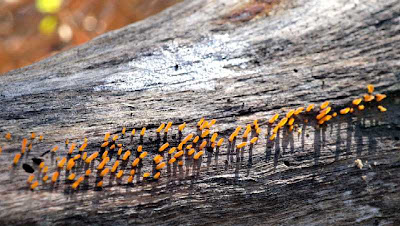 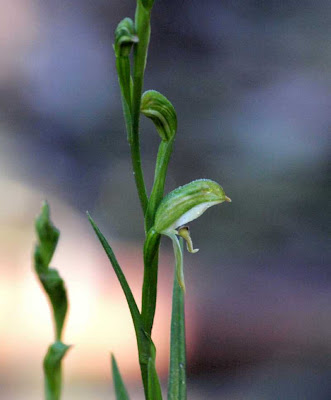 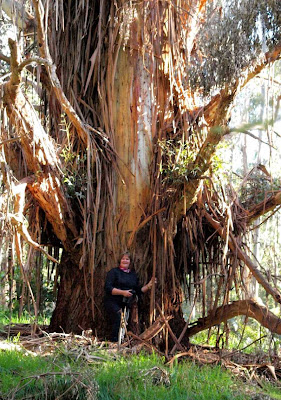 Some of the Manna Gums on this walk are massive specimens. While we were checking the tree tops and scrub for birds, we noticed that we were being checked too. 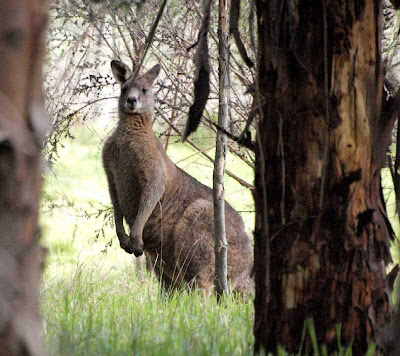 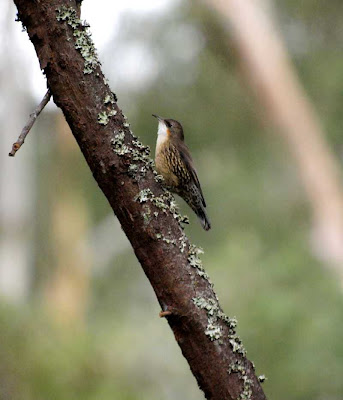 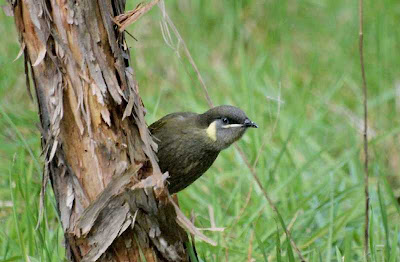 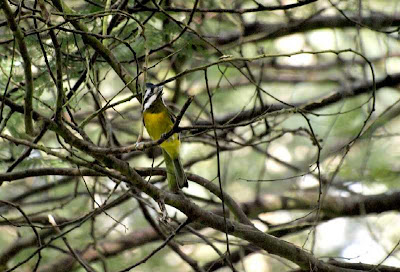 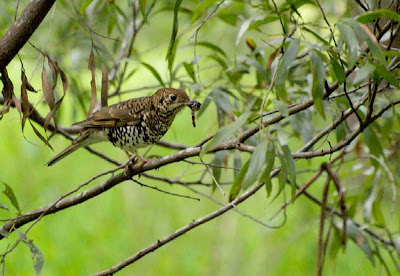 A cup of coffee back in Traralgon wound up a wonderful day. Apart from the usual Magpies, Kookaburras, etc, we scored a list of 30+ species - (thanks for the records John).

Regards,
Gouldiae.
Posted by Gouldiae at 7:36 AM 2 comments:

G'day Readers,
For a few hours yesterday, (another grey day), I explored a small piece of bush near home that I haven't checked for some time. In general the birds were pretty quiet.

As I was wandering through some scrub, I was alerted to the presence of some Grey Currawongs, not by their distinctive ringing call, but by the sound of bark being ripped from the trunks and branches. 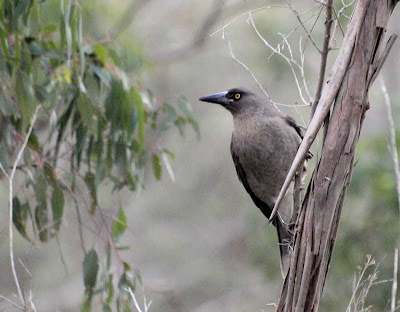 They silently glided from tree to tree and with those powerful bills would begin tearing at the bark, peeling off large strips and probing for insects beneath. The whole family were always just ahead of me and in the wrong position for a decent photograph, but I had some nice views through the binoculars.

I only had an hour or two to spend, so after not seeing too much else I began the short drive home. At the old tip site, some little birds darted across the road into the roadside trees. I stopped and wound down the windows and within just a few minutes I ticked Scarlet Robins,  ... 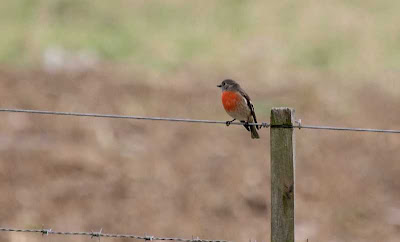 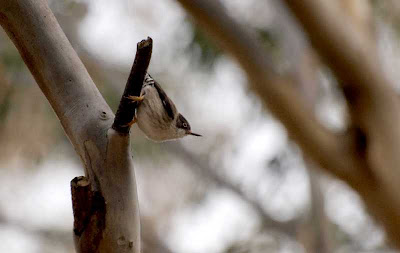 It always fascinates me how sometimes just the side of the road can be a real little hot spot and how the vehicle can work well as a hide.
Regards,
Gouldiae.
Posted by Gouldiae at 7:27 AM 3 comments:

Yesterday I visited John and Marg at Northpoint again. Their place can be a great hotspot for little birds at times. Large birds too, for John and I spent some time watching a young Whistling Kite being fed in it's nest high in a large Red Gum.
Many of the eucs were in flower and the list of honeyeaters we saw included Red Wattlebird, Musk Lorikeet, Rainbow Lorikeet, White-naped Honeyeater, White-plumed Honeyeater and Eastern Spinebill. Wrens and Fantails were busy attending to the insect population as well.
John had told me the Diamond Firetails were spotted again recently and that was my reason for visiting. The property contains a large area of un-grazed native grasses that often attract the little seed eaters. The Diamond Firetail is listed as vulnerable in NSW, Vic and SA, mainly due to the degradation of native grasslands as a result of clearing, grazing, etc. It was so nice to see them. 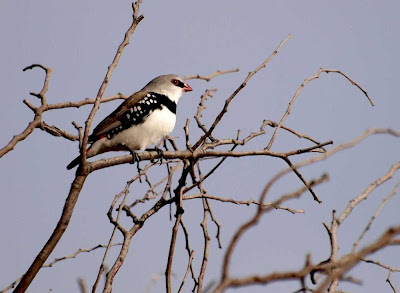 The edges of John and Marg's place contains some nice pieces of mixed species open woodland. After a short walk and ticking the Honeyeaters, Scarlet Robins, Yellow-rumped Thornbills, etc, we came across a small family of Varied Sittellas, another species considered to be on the decline in many areas and are listed as vulnerable. 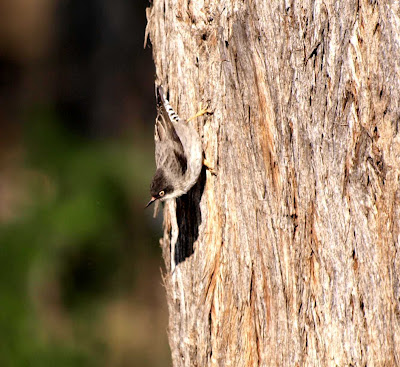 The Varied Sittella is a very communal bird. They roost and nest in small groups and often mutually preen. 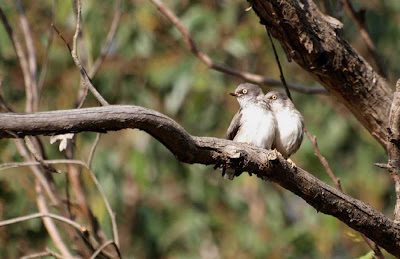 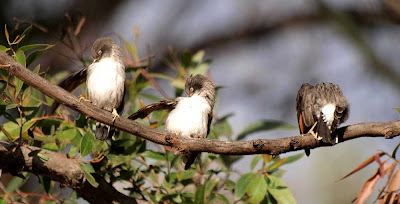 The clearing of fence lines and roadsides, 'tidying up' on farms, collecting firewood, clearing for grazing and urban habitation etc, all contribute to the dropping numbers of many of our 'bush' birds and mammals. I do see some excellent work in progress in this area by groups such as Trust For Nature, Greening Australia, Landcare, etc. Lets hope we are not too late.

Regards,
Gouldiae.
Posted by Gouldiae at 8:06 AM 3 comments: