G'day Blog Followers,
Over in the right hand column, under the 'Also...' category, you will find a new link to a web site devoted to the various golf courses in this corner of the land. As regular readers here will realise, I have a little to do with one golf course in particular and if you click on 'Heyfield' and further, 'On Course' and 'Major Events', you may recognise some images from old blog entries. 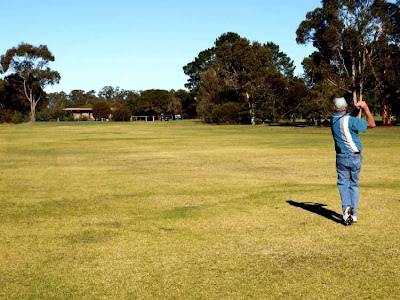 The approach to the first by 'leftie'.

I do enjoy the occasional game and the fellowship associated with it, but I particularly enjoy the environment. The Heyfield course is mostly carved from bushland and despite the best efforts of some slasher operators, (just had to slip that one in), a fair bit of the indigenous flora and fauna still remains between some of the fairways. 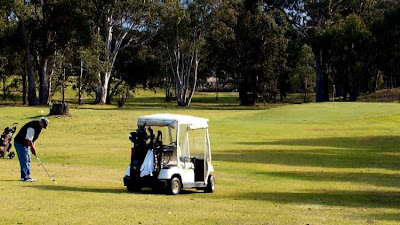 Ron chipping on at the fifth.

Bird species abound, provided they are not chased off by Noisy Miners. In a 'normal' spring, the variety of wildflowers is astounding for such a small area. Some of the trees are magnificent. At night I have recorded Sugar Gliders, Ring-tail and Brush-tail Possums, Tawny Frogmouths, Boobooks, and Barn Owls. I haven't found an Owlet Nightjar yet, but the first of a number of suitable roost boxes is already up, so I'm hopeful.

Oh, yeah, right, back to the golf. Anyway, if you're in the area and you enjoy a hit, you might find the link provided is of some use. If you do wish to visit, give me a yell - be happy to show you the course. 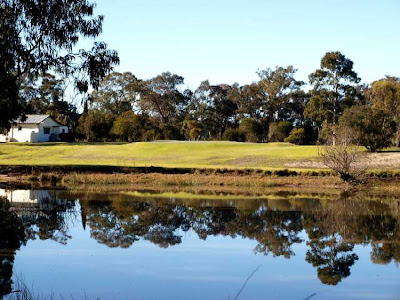 The daunting water hazard in front of the eighteenth.
Regards,
Gouldiae.
Posted by Gouldiae at 7:08 PM 2 comments: 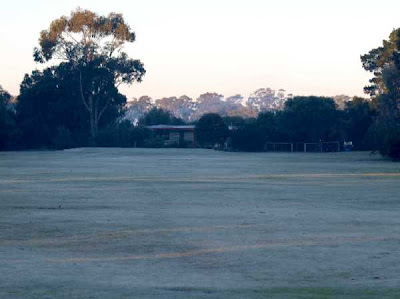 Looking down the first fairway 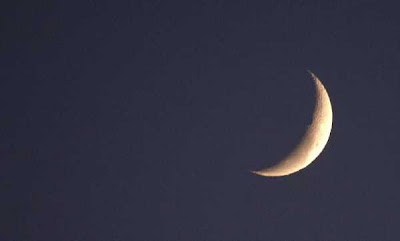 On the way to NZ 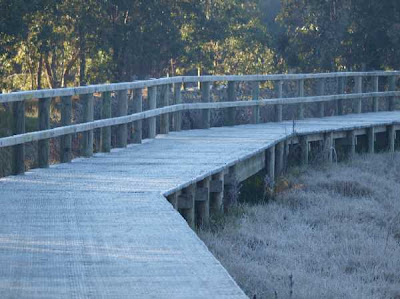 Icy boardwalk at the wetlands

The frosty mornings are nearly always followed by a beautiful day. If it isn't going to rain properly around here, we might as well have great days. 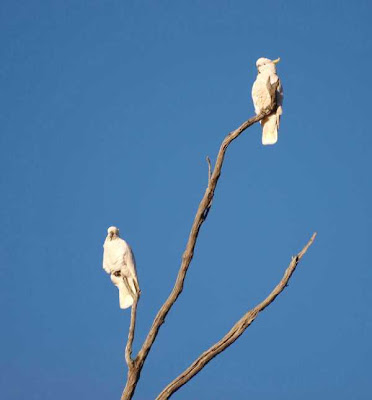 Getting some morning sun - 1 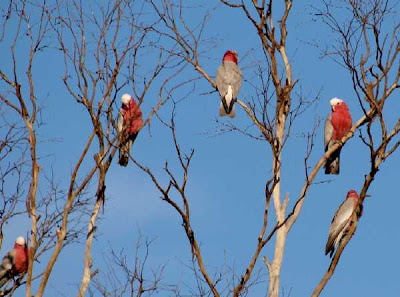 Getting some morning sun - 2

Regards,
Gouldiae
Posted by Gouldiae at 9:33 AM 10 comments:

Just Itching For a Scratch 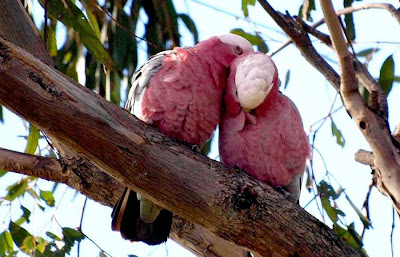 G'day,
This morning was cold and foggy and I had to go in to town early so, I took the camera and decided to do some warming up laps of the wetlands. The light was terrible and there was still a fair bit of fog about so I wasn't really thinking of seeing much to photograph. However, as I got near the second bridge, some movement in a 'flowering gum' caught my eye. One of the birds emerged toward an outer clump of flowers and revealed itself as a Yellow-faced Honeyeater. 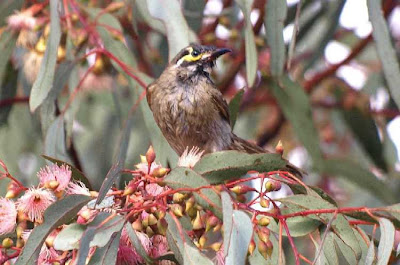 I could see another bird working its way to a spot I could see, and it revealed itself as an Eastern Spinebill. 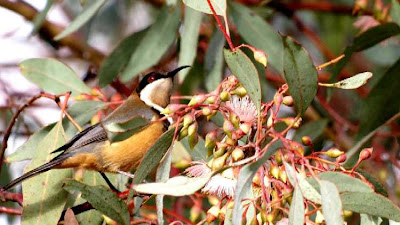 There was further movement within the foliage and although I was beginning to get cold again, I waited a little while and got a White-plumed Honeyeater. 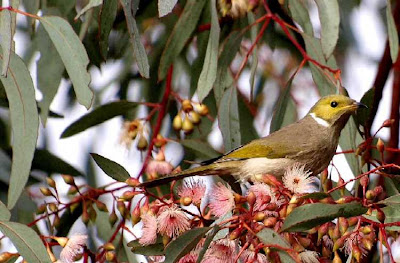 This was great fun, and there was something else working its way toward me too. Turned out to be a White-naped Honeyeater. This one wouldn't sit still long enough for a decent picture though. Then they decided the show was over and a dozen birds flew out all together.

I don't ever recall seeing 4 species of honeyeater in the one tree at the same time.

I was too cold by now to stand there and wait for them to return. I could hear the spinebill calling nearby, so I'm guessing they would have returned for a top up at some stage.

If The Glove Fits...

G'day Nature Lovers,
Last night I did a quick saunter, (?), around the house with the spotlight and came upon a Brushtail in a large tree near our house dam. 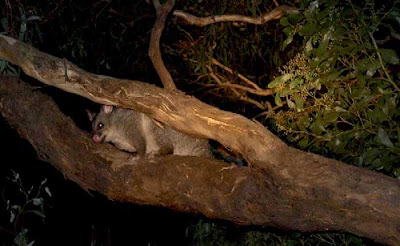 I was trying out the new camera's flash settings. Between taking a shot or two and checking the playback images, the possum disappeared. There was an old nest box nearby which I'd erected several seasons ago for a pair of Wood Ducks. In the last few years I'd noticed a pair of Crimson Rosellas using this particular box too.

After waiting a short while a nose appeared at the entrance hole and then out came the head. 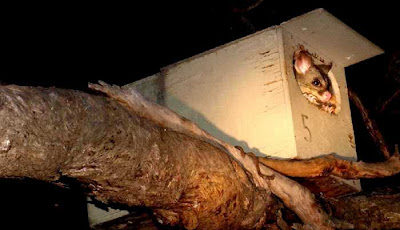 It seems ducks parrots and possums are all quite happy to use the same abode. Pretty obvious I suppose - a hollow is just a hollow after all!
Regards,
Gouldiae.
Posted by Gouldiae at 8:34 AM 6 comments:

G'day,
Today the Heyfield Birdwatchers travelled to Holey Plains State Park and then to the Sale Common. It was cold and grey, the light was very flat and the birds were particularly quiet but we all enjoyed being in the bush for a bit.

At Holey Plains, the New Holland Honeyeaters were relatively plentiful, but there was little else to report. Some Striated Thornbills dashed about in the upper reaches and an odd one or two Blue Wrens scampered through the undergrowth. Not much else of the avifauna variety I'm afraid. (Plenty of orchid leaf along one particular track DF. I'll keep an eye on it.)

On to Sale and a walk along the new boardwalk and track was a little better. Swans, various Ducks, Cormorants, Darters and Swamphens were spotted on the water, but the best sightings for the day probably, were a pair of Black Shouldered Kites high up in a large Red Gum and across the other side of the lagoon, a Whistling Kite with a carp in its talons. 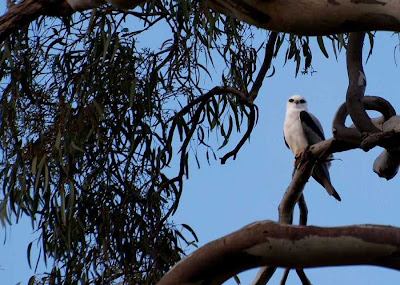 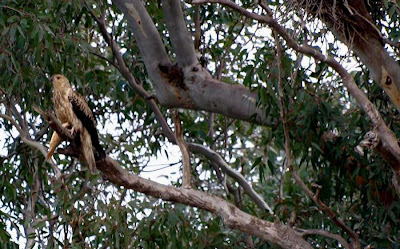 John and Nancy tell me they watched the Kite take the fish, so that was something of a bonus.

We checked Lake Guyatt, a favourite little hot spot, but things were quiet there too. Swans and Ducks etc on the water a few Wrens etc. in the shrubbery and that was about it.

We took a few back roads on the way home from Sale and John lived up to his promise of a raptor - we spotted a pair of Wedge-tailed Eagles on top of a dead tree, (where else?), way out in the middle of a paddock, (where else?).

All in all, a pretty quiet day. I don't know about the others, but it was nice to get home by the fire!

G'day Folks,
On Saturday the Heyfield Birdwatchers are visiting Holey Plains. I wasn't too certain which access track I wanted to use, so yesterday I ducked down to do a reconnoitre. On the way out I spotted a Yellow-tailed Black Cockatoo in the top of a nearby pine tree. 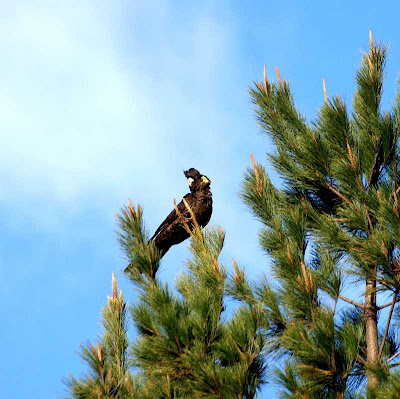 When I stopped the ute to get out and have a good look, I could hear a large mob of them screeching further back in the pines. As I waited they began to fly over. 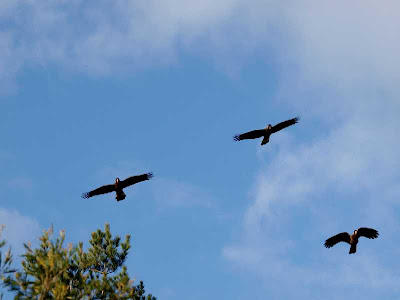 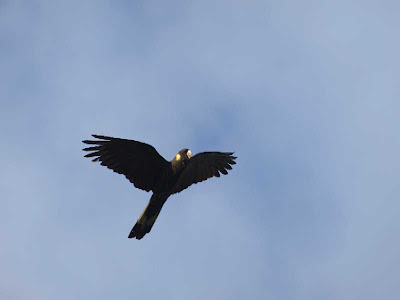 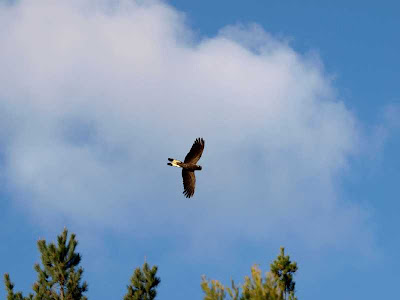 As I clicked away, I lost count of the number beyond 50. Lovely sight.

Just before I left - and the cockies were still going over - I looked into the low scrub behind me to see this guy watching. I'm not sure how long he'd been there. 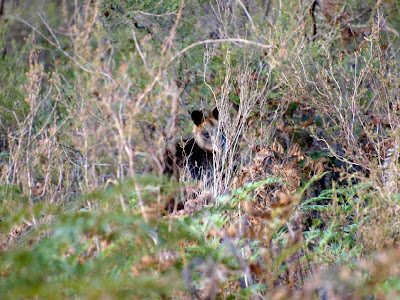 All very nice, but I bet they won't be there to perform on Saturday!
Regards,
Gouldiae.
Posted by Gouldiae at 4:23 PM 3 comments:

... around here at the moment.

G'day All,
There's a mass of cold air coming up from the Southern Ocean, and although there is sunshine at present, it's freezing - or do I just feel it more these days?

A decent low pressure system is sitting just south east of us and the clockwise air movement is dragging up the cold air. 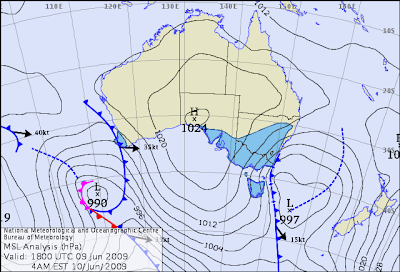 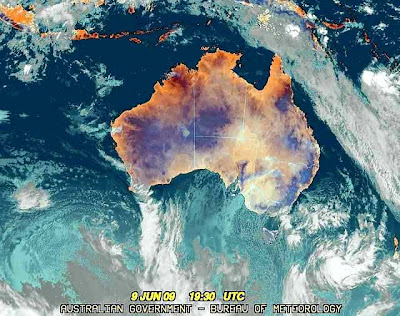 The Age reports we are due for more, with a viciously cold night forecast for tonight.

The morning walk was barely enough to warm me up. I was stopping frequently though. Despite the chill, a few birds were still keen to pose for a photograph. 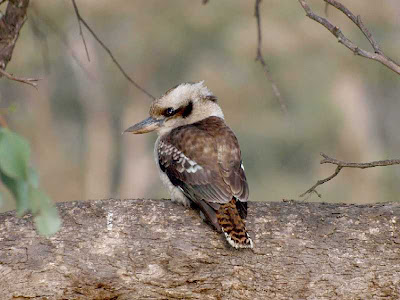 Ah, now I feel better, but I am glad the woodshed is full!

Regards,
Gouldiae
Posted by Gouldiae at 10:27 AM 8 comments:

G’day,
Last weekend, Duncan and I enjoyed the interesting experience of observing the Field Naturalists Club of Victoria, carry out a small mammals survey at the Giffard Flora Reserve. I’m always encouraged when I come across people with such passion for our environment. Here’s a link to an album of Duncan’s pictures.

While we were there, it was evident that the birds were very quiet. The old Saw Toothed Banksias were not in flower, although some of the eucs on the sand ridge had plenty of blossom. After we left the group on day two, we headed down to Jack Smith Lake which is quite nearby. Jack Smith Lake is right behind the sand dunes on the coast, and the coastal Banksias here were well in flower.

After checking the ‘salt flats’ and counting near 100 Blue-winged Parrots, and ticking White-fronted Chats and Striated Field Wrens, we headed for the car park area for lunch and were greeted by a strong Crescent Honeyeater call as we got out of the vehicle. Blue Wrens and Silvereyes dashed among the lower scrub while Little Wattlebirds and New Holland Honeyeaters chased each other in the tree tops. 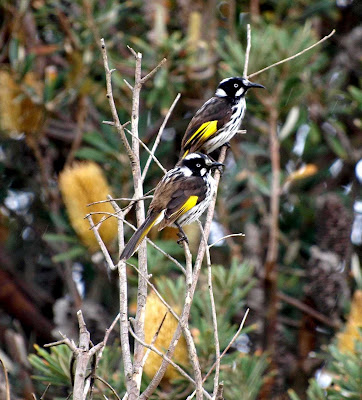 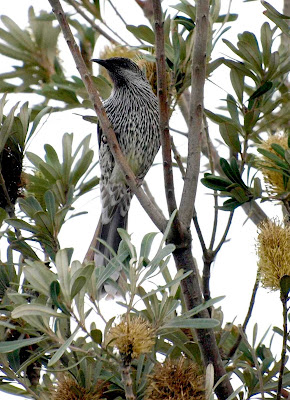 A few Crested Terns preened themselves on top of some posts and a Brown Falcon did its hovering act above a nearby field and a pair of Red-capped Dotterels skitted about on the mud flats.

Neither of us had been to Jack Smith Lake for some time, so it was rewarding to see the number of parrots. The main lake is still the only body of water. Like everywhere else around here, the place is crying out for some decent rain.